Note: The official IMOP trip report will be posted in randomly intermittent installments. Part I of the report can be found here. The author of the report is our cruise director, Santa Claus, with occasional editing by yours truly. Enjoy!

Eventually the early bust outs from the Nugget midnight tournament cab it back to the Strip, followed by the rest of the crew around 6:00 a.m.. Baby Los finds an Omaha HL game going at the Venetian. The big stack is the drunkest 90 year old he’s ever seen. The old guy is unable to speak or stand and finally security has to remove this "alive-coma" guy, and the game breaks. But this would not be the last IMOP run in with Omaha insanity…

Perhaps the odd ball story of the first night goes to River Joe. We’ll let him tell it:

Mr. Chow and I cab it back in record time with this crazy black lady behind the wheel of Dodge Charger. I do think I got taken as the trip from TI to Bally’s took me back down the expressway resulting in a toll about the same as the ride from downtown to TI. Finally arriving at the hotel about 4:15 a.m. completely spent, I get on the elevator and was joined by an Asian woman that I’d just passed who was talking to guy in hallway. I didn’t think much of it at first, however she proceeds to put out her cigarette on the elevator floor and then pick up the $100 poker chip that falls out of her blouse. She casually starts to make her way across the elevator and on her way across she makes the comment, "So I see you're married," and eventually positions herself between me and the button panel. She proceeds to start groping my upper body and eventually I get what would be my biggest FELTING of IMOP-VI. Fortunately the door opens to my floor and I quickly exit, repeatedly saying, "No, Thank you!”

The gang gets back together at 8:00 a.m. for the annual “Breakfast O' Champions”. Grange started this tradition where the prior year’s IMOP champion takes anyone who is still awake the first morning to breakfast. Being the class guy he is, Grange’s choice of venue was the St. Louis Cafe in Paris. Santa’s choice was Denny’s. So, this year was Barbie’s turn as reigning champion. He made an excellent choice of the Peppermill. One small problem though—he didn’t realize he was on the hook for buying. So, as the group all orders more food than they could eat and multiple cocktails, Barbie gets slightly panicked as he had been getting killed at the tables to that point and wasn’t excited about shelling out for this breakfast. However, the gang decided to pitch in for cocktails and before we knew it, we were enjoying a walk back to the Venetian to figure out what to do next.

After struggling with his various cash game grinding, Bonnie puts together an EPIC streak of basketball wagering wins, at one point hitting 10 in a row on the conference tournament games. A few others climbed on his bandwagon and the money was rolling in (for the time being). Among them were Colt and Fat Jesus, who hung around the Venetian sportsbook (Bonnie's headquarters) for a few cold ones and some hoop-watching—and Colt got more than he bargained for:

Fat Jesus & I are hanging in the Venetian sportsbook. All within 5 minutes of each other, I get up for a drink and witness a chick-fight with punches thrown and chairs tossed. Apparently “Kim” is a bitch and treats crazy woman like sh*t (she repeated it 4-5 times). While the catfight was going on, a guy playing video poker a few feet away hits four aces for $2000. I love Vegas.

At 2:00 p.m., we entered the TI tournament, which doubled as the IMOP “Mad Hatter” event where the best hats would get IMOP points. The winner this year was self-effacing Lucky the Leprechaun, who in addition to his green shirt which read “Feeling Lucky?” had a tiny little bowler hat to go with (complete with elastic band to keep it on his not quite-as-tiny head). JeBeDIA and Bonnie manage to cash, keeping intact their six year streak of cashing in an IMOP tournament. Sadly, Fat Jesus might have joined them as well, had he not gotten caught shoving with the Grump just before the bubble! 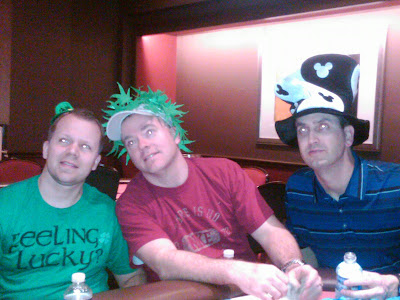 Lucky, Colt, and JeBeDIA model their hats at TI. 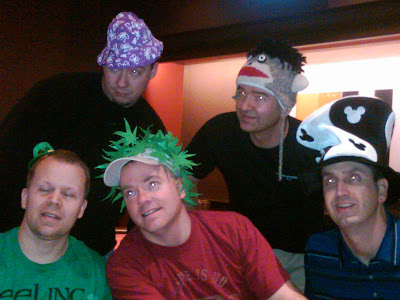 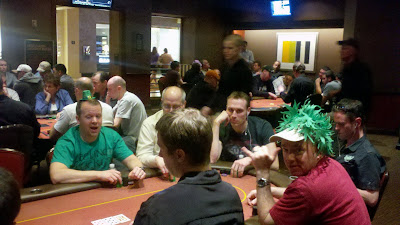 Hats play at the TI tourney.
Then it was time for the first ever “IMOP Ca-Caw! Golf Classic”. Santa, JeBeDIA, Colt, and Barbie cab it over to Callaway for their 7:00 p.m. tee time under the lights. The format was simple—buy three golf balls each, rent one bag of golf clubs total, auction to get your single club out of the bag (had to putt with it too) and play nine holes. Oh, and if you lose all three balls you’re done. Oh, and short of not physically touching another player—no etiquette or rules.

We get ourselves checked in to play and begin our auction. Santa starts off the auction with a $5 bid, which Colt immediately bumps to $10 to win his pick of the pitching wedge, Barbie wins the 9 iron with a $5 bid, then JeBeDIA bid $1 to win the 8 iron and Santa gets the 7 iron for free (winner then gets the pot). Colt is miffed as he realizes he is already $10 behind Santa in the competition by being overzealous during the auction. At this point, Barbie and Santa still have not been to bed (vying for last to sleep points), and have consumed their weight in cocktails. 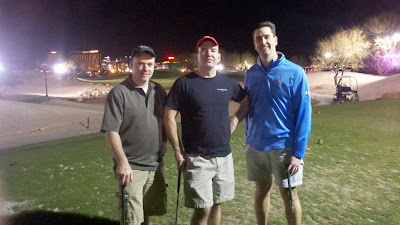 The orignal Ca-Caw! crew.
From left: Colt, Barbie, & JeBeDIA.
(Not pictured—Photographer Santa Claus)
The best part of the game turns out to be the heckling during the swings. Since we are playing at night under bright lights, the shadows allowed for some fun. At one point, Barbie stands behind Santa flapping his arms like a bird to make shadows on Santa's tee shot. Colt adds the “Ca-Caw!” sound effect and the catch-phrase of the trip was born, along with name of the event: The Ca-Caw Classic. Unfortunately, Santa and JeBeDIA regret not paying more for their clubs as they finish a distant 3rd and 4th in the event. Amazingly, Barbie shoots 3 over to win the “Classic”. Also of note was that after bringing back the calls of “Ca-CAW” to the poker tables, we modified it to “Fukkaw!” for tweet purposes to clean up Bonnie’s drunken, profane Tweeting (#fuckoff being his favorite hashtag). 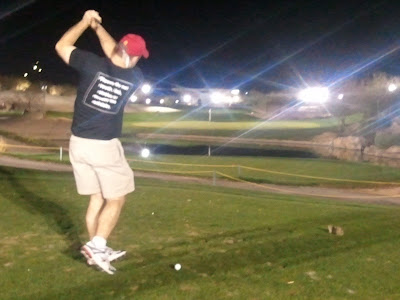 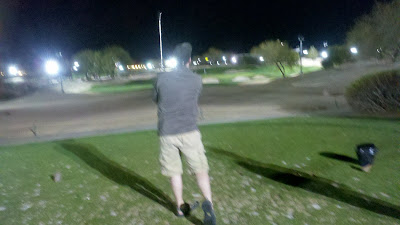 Barbie (top) and Colt display their golf skillz. Ca-Caw!
Arriving back at the Strip, Santa decides he finally needs a nap while everyone else heads to a reportedly interesting game at Aria. The Pokerati hold ‘em/Omaha mixed game is going and Mr. Chow, Colt, River Joe, and Grange get seated. An older guy at the table is getting a backrub from an older woman. He says, “She’s my mom, not my wife. Just thought I’d say that because I get that a lot.” After an uncomfortable pause, River Joe replies, “That’s just wrong…” But, the game is wild and lucrative, with Grange and Mr. Chow each cashing out for four-figure profits. Mr. Chow also made several enemies by calling down in Omaha with top pair or two pair hands ... and being correct. Grange was sitting next to the three "pros" who were Mr. Chow's victims, and commiserated with them about Mr. Chow's horrid donkey plays, before felting two of them with flopped sets of Kings and Aces.

After a few orbits, Colt realizes the Pokerati mixer is not the game for him. He switches places with Barbie and gets in a $1/2 NL game. Asian Phil Hellmuth (APH) is to his right when it is folded around to them in the blinds. Colt looks down at A-K and offers to chop. APH looks down at his cards and puts in a $10 raise. Colt instructs him on the etiquette of chopping. APH’s reply: “It depends on what my hole cards are”. After informing him it doesn’t work that way, Colt promptly shoves all-in. Bewildered, APH calls with pocket 10s. The turn is an Ace. Colt smiles. APH goes on tilt. Hilarity ensues.

Meanwhile, back at the Venetian, Lucky proves to be not living up to his nickname. He gets in a four handed pot with Jd5d. Flop comes 10d Qd Kd to give him the flush with the open-ended royal flush draw. He and another guy end up getting it all in on the flop. His opponent turns over the 6d9d. Naturally $350 should be going Lucky's way ... only to instead have the cooling system fall from the ceiling on his head as the turn of 7d and river of 8d gives his opponent the runner-runner straight flush!

After a good run at Aria, River Joe had gotten a text that Santa was heading back to the room he and Grange were sharing to get some sleep, and was going to leave the door cracked open for Joe to get into the room for a key as Joe was switching hotels as his conference was done. River Joe arrives at Mirage and spends 30 minutes trying to find a room that didn’t exist. He comes to find out his error was that Grange had booked the first two nights at TI and was not checking into Mirage until Friday. This explained why River Joe couldn't locate either the 26th floor or room 89. Frustrated, dragging too much luggage, and after walking around for half an hour, River Joe said #fukkaw and just checked into Mirage, then headed to the Venetian for more poker. Yes, this also means that Santa had been dead asleep in Las Vegas with his hotel room door propped open at TI for three hours .... and lived to tell about it.