As "Winter Storm Q" sweeps across the Midwest, the thoughts of the Ironmen of Poker turn to the bright lights of Vegas, with dreams of poker tables, casino pits, sports books, and alcoholic beverages dancing in their graying and balding heads. Next weekend will bring the Ironmen back to Poker Mecca to celebrate the high holy days of IMOP VIII—Revenge of the Nerds. D-bags beware! Hijinks will ensue!

"But wait!" cry the loyal followers of the Ironmen. "Whatever happened on IMOP VII—There Will Be Blood? Who won the Jacket Dinner? Who tilted Euro D-Bags while stacking mountains of chips? Who pulled the best "Ta Da"? Did the Honey Badger give a sh*t? Where's the freakin' trip report?"

You know that "What Happens Here, Stays Here" ad campaign for Vegas? Well, here's the dark truth behind all those wild tales of Vegas fun. The Vegas Strip is the high altar for the Gods of Degeneracy. Most who worship there leave happy, if hungover and poorer. But the dark gods demand the occasional sacrifice to maintain cosmic balance. For six IMOP expeditions, the Ironmen left Vegas as winners. Last March, instead of celebrating IMOP-VII, the entire Ironman crew sevened out.

Frankly, the Vegas admen have it all wrong. The happy stories of cashing sports investments, tossing back beverages, and tilting d-bags at the poker table are meant to be remembered and shared. It's the trips where the only stories are of parlays getting hooked, dealers drawing 5s on 16s against double downs, and monsterpottens getting shipped to d-bags hitting perfect-perfect that should be shrouded in a cone of silence. So it is, and so it shall be for IMOP-VII, henceforth known as the Dark Age.

Consequently, there will be no official trip report filed for IMOP-VII, no official record made of the hijinks and hilarity, the pranks and putdowns, the booze and bonding, that mark a successful Ironman outing. However, for the benefit of future poker archaeologists, here are some unfinished notes found on scraps of napkins buried deep in my iPhone notes app.

Tournament I:  Stratosphere. In hindsight, having the official kickoff toast in the bar at the top of the Stratosphere while watching people intentionally jump over the side "for fun" may not have set the right tone for the trip. 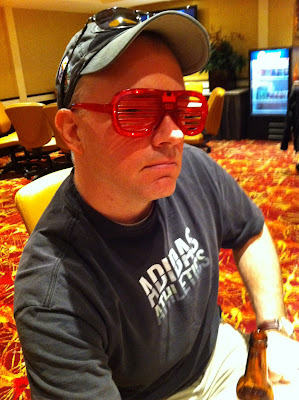 Tournament III:  Mirage, with "White Trash (wife beaters and tattoos)" contest. Not sure why, but the Mirage poker room has yet to call security on the Ironmen. Maybe this year. It's good to have goals. 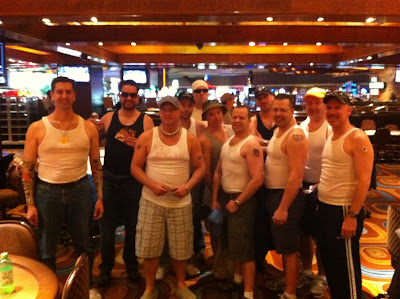 The white trash crew at Mirage. 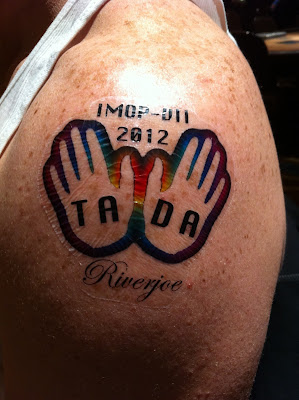 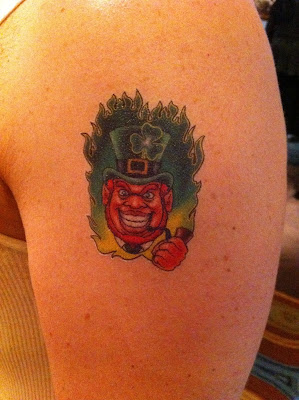 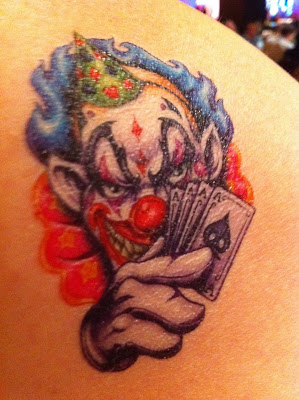 
Third World Poker Tour:  Rooms on the Tour included Mandalay Bay, Luxor, Excalibur, Monte Carlo and ... Flamingo? Imperial Palace? Bellagio? Sure. Why not? If they weren't the actual sites, they should have been. Plus, good luck proving otherwise. 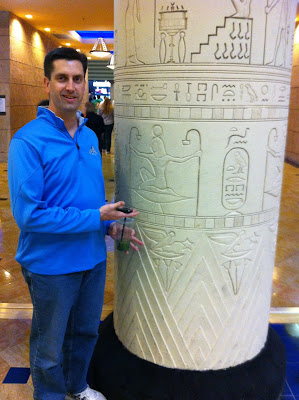 
Tournament IV:  Aria. Awesome room. Awesome tourney. Too awesome for the Ironmen who left steaming piles of poker dookie all over the room. Which may be why we can't have nice things.


Jacket Dinner:  Stack at Mirage. Where do you think all the dookie came from? For lack of memory of actual results, and because history is an artificial construct created by the victors to establish a credible social narrative supporting their usurpation of power, the official Jacket Champion was Santa, with Lucky as First Loser. 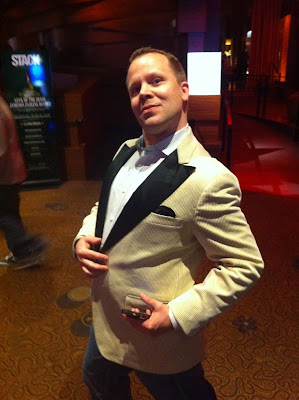 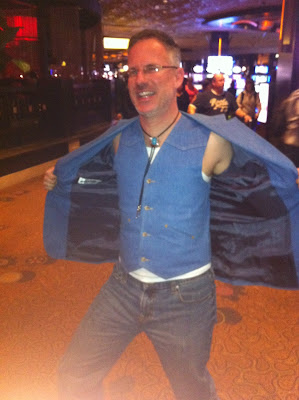 Santa makes a statement:
"Even hookers won't hit on me tonight."


Champion:  None. Had any Ironman so much as walked away from Vegas up a solitary credit on penny slots, he would have won the IMOP-VII Championship in a rout. For those of you keeping score at home, rumor has it that the ironically named rookie Fun Bobby won as Leastest Loser. 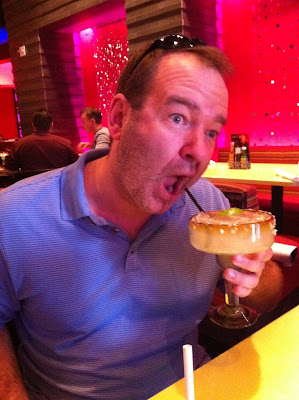 As two-time defending IMOP Champ Barbie might
have said if he wasn't busy 4-balling blackjack on credit
with a homeless guy by the Bally's pedestrian bridge:

"Sometimes, the only answer is another drink."