Kumbaya and the Limits of Empathy

Boy have we come a long way since the Iowa caucuses. As we await the results of yet another hotly disputed presidential election, my thoughts have turned to the widening and seemingly unbridgeable gulf between Republicans and Democrats, conservatives and liberals, right and left. In recent days, two prominent articles (one in the Washington Post, the other in the Wall Street Journal) have suggested that liberals need to learn to "empathize" with conservatives—in particular, blue-collar white voters.

These and similar empathy-trolling articles are based on the premise of finding a way to join hands and sing kumbaya after an election. This kumbaya mentality held a certain essential truth in the wake of the bitter, fractious elections from 2000-2012. Growing up in a small town in rural Nebraska, I understand the angst and even despair of those who feel left behind in the rapidly changing world. And I agree many liberals would be well-served to better understand and, yes, empathize with conservative voters.

But this election is different. We are far past differences in policy. We are even past disagreements as to basic facts; the rejection of shared facts by many conservative politicians and voters has only exacerbated our political divide. We are in a new and dangerous place where we no longer even share a concept of American democracy.

Trump has built his campaign on a base of alt-right, white nationalist support. This is not saying that all, or even a large number of his supporters are alt-right white nationalists. But that base, the ones supporting Trump because he wants to deport millions of Hispanics because they are "rapists and murderers", fueled his nomination. And we should rightly be disgusted by and reject them.

But even that is not the real problem with the kumbaya argument. The highly partisan, polarizing elections off 2000-2012 were fought within the shared boundaries of American democratic discourse. But Trump and the alt-right (with the tacit support of mainstream Republican leaders) have abandoned all pretense of those shared democratic values. Trump got his start with his alt-right base by championing the "birther" movement, attacking the legitimacy of Obama's presidency. Trump has only thrown gas on the alt-right fire with his rhetoric during the present campaign.

Trump not only claims polls are skewed, he and his alt-right supporters also assert the political process itself is rigged. Linking back to the racist base of his candidacy, Trump this week suggested the Nevada elections are "rigged" because polling places were only kept open for a "certain group" of voters. Or how about his rhetoric toward Clinton. Calling a political opponent "crooked" and "corrupt" is fair (if rough and tumble) commentary. Calling her a "criminal" and promising to throw her in prison is the stuff of fascism.

But this is just the tip of the iceberg. In even more heated rhetoric, Clinton is no longer merely a "criminal"; Trump and other Republican leaders are asserting that Clinton and President Obama are "traitors" or have committed "treason"--treason, of course, is one of the few federal crimes for which there is a death penalty. And don't forget Trump suggesting that, if the election goes the wrong way, his supporters should use their Second Amendment rights (a dog whistle to the alt-right, where the right to bear arms is held to be part of a right to armed rebellion against a perceived tyrant). And as the election drew to a close, Trump has even refused to state if he will accept the results as legitimate in the event he loses.

Of course, it's hard to know whether and to what extent Trump and other Republican leaders are drinking the alt-right Kool-Aid. For some, whipping up crowds chanting "Lock her up!" is only a tool to energize their voting base. Yet, when those chants turn to "Execute her!", those same Republican leaders turn mum, offering at best tepid rebukes, afraid of losing their base (or worse, becoming a target in their next primary).

It's one thing to argue that we should all find common ground and respect each other after a bitter campaign like Bush-Gore or Obama-Romney. But it's an entirely different argument when the Trump/alt-right wing of the Republican party rejects the legitimacy of our shared democratic norms. How, exactly, are we supposed to engage post-election, particularly if Clinton is elected? How is that conversation at the office or church supposed to go?

"Clinton is a criminal who ought to be thrown in jail."

"I guess I don't agree. I get your frustration, but you know, she hasn't even been charged with a crime."

"The corrupt system is just protecting her. She's a traitor and ought to be executed."

"Well, I see where you're coming from, and I can agree Clinton has had some shady moments, but I guess I can't agree with you about her being a traitor."

"Thomas Jefferson once said, 'The tree of liberty must be refreshed from time to time with the blood of patriots and tyrants.' And that's why we have the Second Amendment."

"Interesting point. Never thought of that perspective. Not sure I agree with you, but let me mull it over. Want to go grab lunch?"

Sorry, but certain ideas are sufficiently dangerous to a functioning democracy that they cannot be given false equivalency and treated as a legitimate part of political discourse. Rejecting the legitimacy of an anti-democratic argument is not "dehumanizing" those who advocate it; it's a defense of basic American values.

Sometimes, it's not about empathy. You understand your opponent's argument perfectly. And the only rational response is to say their idea is batshit insane.

So, until the Republican party rejects the batshit insane, anti-democratic, anti-American alt-right, I'm all out of empathy. 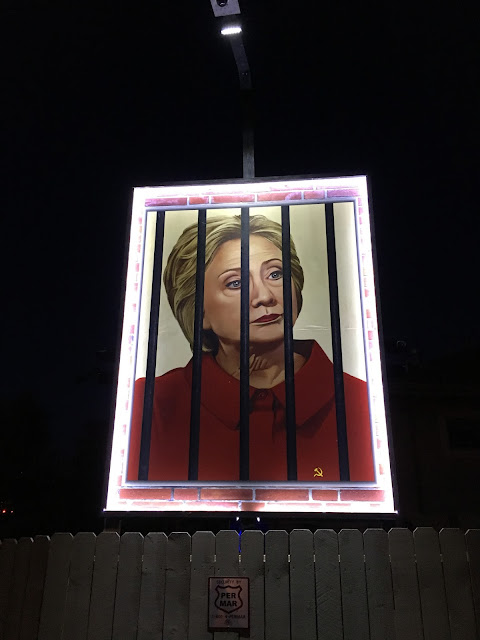 (Billboard posted by a resident of an affluent
West Des Moines, Iowa neighborhood.)