Bludgeoned by the Deck

Poker players notoriously love to whine about bad beats and losing streaks. There's almost a perverse enjoyment of the misery of losing.

I much prefer having fun at the poker table, like last night's session at the Meadows ATM. IMOP buddies Santa Claus and Mr. Chow were in town for business and talked me into playing a few hours, bless their hearts! When I arrived, the guys were playing in the 2/5 NLHE feeder game—rookie mistake. Thursday night is one of the two big NLHE tourneys, and the post-tourney 1/2 NLHE cash games are usually soft. I was soon seated in a new 1/2 NLHE game that was starting once a tourney table broke. I locked up my favorite seat—the 3 seat— which was easily the best decision I made all night.

The omens were auspicious—several young players I didn't know and a couple of regular tourney players (who suck at cash games) were at the table. Then, dealing for the button I hit the Ace of spades.  Excellent. That's when I proceeded to get bludgeoned by the deck:

Quite a rush, but I think I was blessed by the poker gods for observing the Deuce-Four high holiday.  Ironically, my three 2-4 hands all whiffed, but I think a set of 4s and a set of 2s—each stacking a supposedly "premium" hand—certainly qualifies as a successful holiday run (and it sounds like the Poker Grump ran quite well for the holiday as well).

Not only was it a profitable session, the table was as fun as I've seen outside of Vegas.  Early on I decided to play my "table clown" persona, and it worked to keep the table happy as they kept losing chips to my SVB run.  I even bought three rounds of drinks, making sure to joke that I was buying with someone else's chips.  There were a couple of young guys at the table from out of state, and I spent the night poking fun at them, and they loved it.  There were a ton of funny slams traded around the table, but I don't recall any now.  However, my buddy Santa Claus had the quote of the night.  After one of the female dealers was telling us about a party where the host had served Rocky Mountain Oysters as a poolside snack, Santa pipes up:


It's not a party until you're sucking down some testicles.

And he's supposedly the straight guy ...

I sensed my SVB rush had ended, so I locked up a tidy profit: 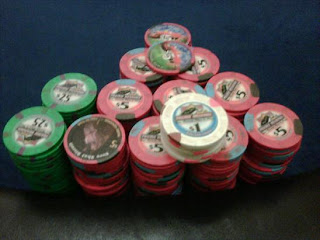 Sometimes, I play so good.

POSTSCRIPT:  Santa Claus stayed and played a while longer.  As I was cashing out, he hit quad 5s and doubled though the table yahoo for a $700+ pot.  Later, he flopped the joint with A3s for another monster pot.  Add in $500 in profit from the 2/5 NLHE game, and Santa can pay his elves their unemployment benefits this month.

Although he gacked off a couple of buy-in this session, Mr. Chow was sitting on a nice $2500 score from the 2/5 NLHE game the prior night.  All in all, the IMOP crew made a nice withdrawal from the Meadows ATM.