This morning, I had a meeting out near my house, so I worked at home for a bit.  I had on ESPN2 in the background, to catch a bit of the sports talk shows Mike & Mike In the Morning and First Take.  On First Take, the ever-exuberant (sometimes overly exuberant) Dana Jacobson was hosting, and was engaged in a phone interview of Jets' receiver Santonio Holmes about his role in the Jets win over the Texans, when suddenly (around the 2:05 mark):

Holmes lets out an exclamation.  Jacobson quickly realizes Holmes is driving while doing the interview.  Holmes indicates another driver cut in front of him while moving into his lane.  Jacobson tosses out the witty comeback, "Does he not realize you're Santonio Holmes?!?  What's he doing?"  [Umm, just guessing, he has no clue Holmes is driving anywhere near him.].  Jacobson then chides Holmes, noting that "Oprah would be mad at us for having this conversation while driving."  [If there had been an actual collision, Oprah is a ways down the list of people concerned.].  Finally, Jacobson settles on an awkward segue, advising Holmes to "Save those hands!  They're game-winning hands!"  [Yup, get in a wreck, go ahead and lose your legs or suffer brain trauma, just so long as your hands are safe!].  All in all a couple of shining minutes of peppy coverage trivializing a near-tragedy.  Bravo, Dana Jacobson!

Out of curiosity, I wonder how the ESPN suits felt about Jacobson continuing the interview for another few minutes post-mishap.  At that point, ESPN knows Holmes is on the phone, and has narrowly avoided a collision.  Even if Holmes was not at all at fault, ESPN is still knowingly engaging him in an interview while he drives.  It just doesn't look good.  God forbid any sports star actually gets in a collision during a phone interview.  In any event, it's really not a laughing matter. 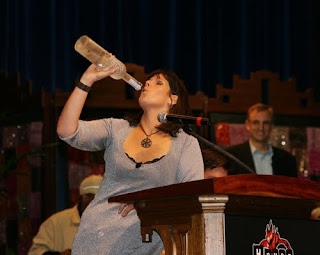