OK, I suppose it's time to let Daniel Negreanu off the hook and bump him from the front page featured D-Bag position. It was a good run, sir, but it's time to move on.

Our new featured D-Bag is one Ryan Tharp, who came to my attention via Deadspin. Apparently, Mr. Tharp is a young Oregon football fan who—like Mr. Negreanu—loves those hilarious prop bets. From his post on Craigslist:

I, along with several buddies, will be celebrating the Duck victory in Vegas from January 11th-14th. During that extravaganza, I plan on taking in the entire Vegas experience, including marrying a stranger. If you are cute enough, spontaneous enough, and an all around cool chick....let's get hitched. Loser of the bet has to pay the annulment costs. So, if you are going to be in Vegas after the National Championship, believe in your Tigers, and want to have stories to tell your grandchildren (won't be mine) then shoot me an email...with a pic! 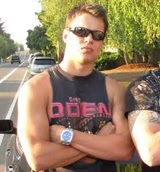 Auburn ladies, this could be your future ex-husband!
Now, I do have to give Mr. Tharp kudos for being the rare college student who can be a drunken lout and still put together a coherent, grammatically correct paragraph. Nonetheless the entire premise of his prop bet is offensive.

The sig other and I have been dating for over four years, and have been living together and sharing our lives for more than three of those years. In a year or so, we intend to get married, which prior to April 3, 2009, would have been impossible in Iowa. Three good judges just lost their jobs because they had the courage to, well, do their jobs and rule on an important constitutional issue the way they felt the law required. Even after our wedding, there will be many states which will not recognize our marital status, should we find ourselves relocating or even merely traveling through, potentially creating issues related to health care decisions and property rights, among hundreds of potential legal landmines.

Now, I know that there are strong feelings on both sides of the marriage equality debate, and I fully accept that folks of good will toward gays might nonetheless oppose marriage equality based on any of a number of strongly held beliefs. It's an issue worthy of rational discussion, and at the end of the day, we may simply have to agree to disagree on some fundamental underlying principles. But please, stop trying to tell me that letting gay couples who are in loving, committed relationships marry will somehow undermine or destroy the "sanctity of marriage".

Looking just at Vegas, Mr. Tharp has good company in Nicky Hilton and Todd Andrew Meister (marriage annulled after two months), Dennis Rodman and Carmen Electra (marriage annulled after nine days), Axl Rose and Erin Everly (divorced after three weeks), and perhaps most famously, Britney Spears and Jason Allen Alexander who got drunk, got married, and had it annulled, all in roughly 55 hours. Britney does know how to live it up in Vegas! Of course, let's also give a special "sanctity of marriage" award to Darva Conger and Rick Rockwell—Darva competed on the reality TV show "Who Wants to Marry a Millionaire?" for the right to wed a guy just for his (financial) assets. Oh yeah, that marriage lasted less than a month before it was annulled.