My Roots Are Showing—St. Matthew's Cemetery

"All things must come to the soul from its roots, from where it is planted."

Over the Christmas weekend, I went back to my hometown in southwest Nebraska. One afternoon, Dad and I took a tour of the countryside, visiting the various plots of farmland and pastures my parents own, on which I toiled my pre-college life away. On our drive between a couple of farms, I asked Dad to swing by St. Matthew's Cemetery, a country cemetery where most of my relatives on my Dad's side of the family are buried.

St. Matthew's holds a spot in my heart because from when I was in 5th grade until I headed to college, my brother Kevin and I helped my Grandpa and Great Uncle Walt with maintenance at the cemetery. Once every two weeks or so, the four of us would take push lawnmowers, hedge clippers, and weedeaters up to the cemetery to keep things presentable. Thankfully, the typically dry Nebraska climate along with the prairie grasses in the cemetery generally made mowing less of a regular issue than in more rainy eastern climes. During water breaks (where Grandpa or Uncle Walt would invariably produce some candy bars from their jug of ice water), Grandpa and Uncle Walt would share stories of the folks buried in the cemetery. Sometimes it would be to share the family genealogy. But more often, it would be stories of the lives of those now gone, and in many cases, long past. How people I would never meet led lives and met fates that intersected with those of my ancestors. Stories of immigration, assimilation, famines, droughts, floods, illnesses, fires, blizzards, tornadoes, and yes, wars.

In many ways, my hometown was a typical rural Midwestern community. Generations of the original founding families lived, died, married, and had new families, resulting in a crazy quilt of inter-relationship between the locals, where everyone was at least second cousins with most of the other folks in the area. Lots of good German family names populate St. Matthew's Cemetery—Huxoll, Niemeier, Hormann, Meyer, Hilker, Stagemeyer, Meyerle, Schaben, Mües, Rodenbeck, Haussler, Menze, and Kaiser. My family name goes back five generations in the area, and is an immigration official's corruption of the original German "Müch". Even today, a few of the local old-timers still see me and inquire "How are the Müch boys?" (pronouncing it as "Muck").

St. Matthew's was a country church, started by German Lutheran immigrants. Services were generally in German, and my Grandma, who was among the last generation to worship in the church, kept a German hymnal from the church after it closed prior to World War II—even then, the decline of rural farm life was well under way. By the time my Dad was born, the church was long gone and the cemetery was the only remaining vestige of a former age. Yet, enough of the founding families remained that the cemetery was not only maintained, but continues to operate and serve as a final resting place for the modern descendants of the original founders even today.

St. Matthew's Cemetery is a peaceful, restful place, located in the prairie hills just a few miles north of my hometown. If it weren't for the fence and the tombstones, the cemetery would be indistinguishable from the adjacent pasture land. Yet in many ways, that little cemetery is more of an anchor for me than anything else in my childhood home. Those summer days spent with my Grandpa and Uncle Walt, learning the history of my ancestors, connects me more to "home" than anything other than my parents themselves.

After the jump are quite a number of pictures of the cemetery, with comments. Feel free to pass on these if you wish, as they likely mean a great deal to me and are not particularly relevant to y'all. However, if you want to know a little more about my heritage, here's your chance. 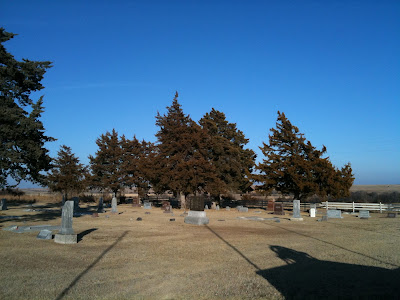 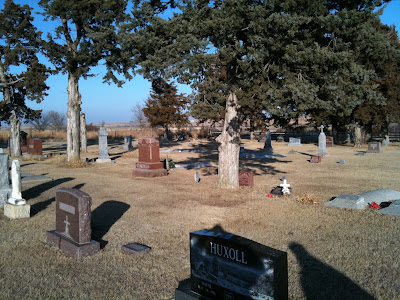 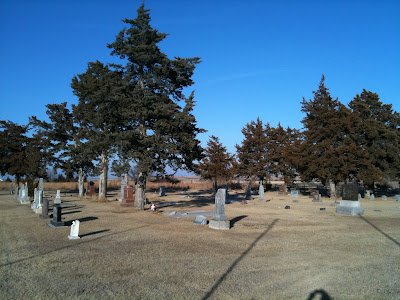 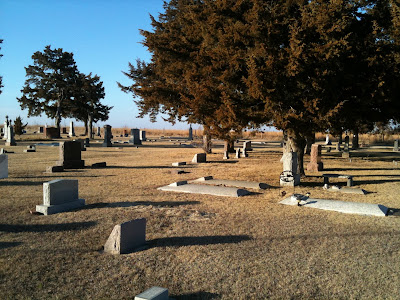 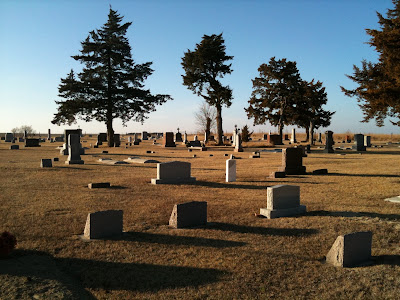 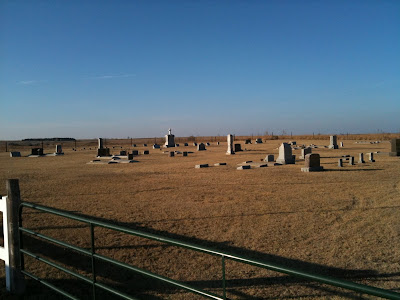 By the main entrance on the south edge of the cemetery is the original St. Matthew's Church bell, which is still rung for funerals and Memorial Day and Veterans' Day services: 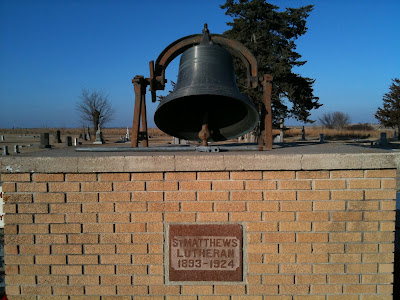 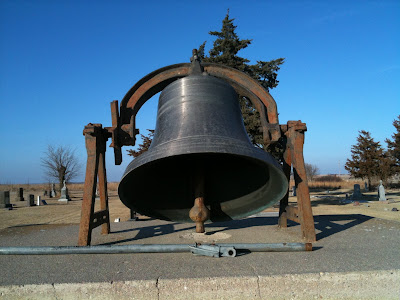 Here is what I regard as the most beautiful, yet perhaps also the most heart-wrenching tombstone in the cemetery, for the child (Magdalene) of the St. Matthew's pastor and his wife, who died the day she was born: 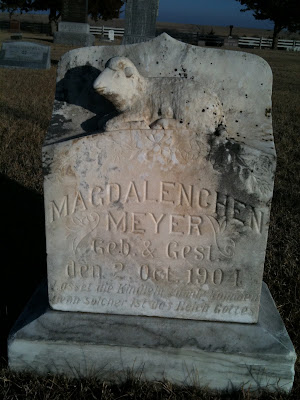 Another great old tombstone of some distant relatives, celebrating the eternal bond of matrimony: 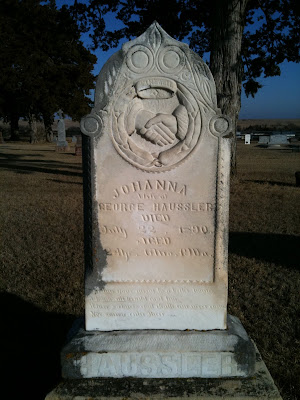 A couple of pictures of an ornate old tombstone for an Ernst Kaiser, who passed away before World War I led to a change in the family name (think Muslim names post-9/11): 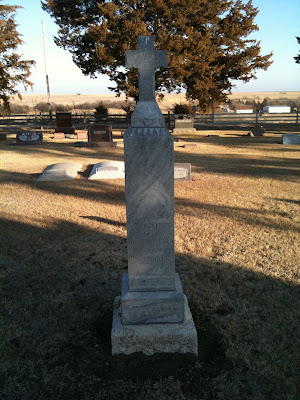 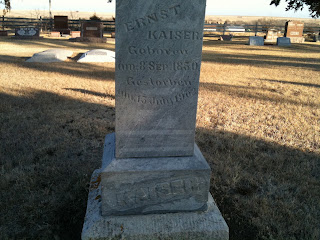 Perhaps my favorite, and the saddest, story in the cemetery. These tombstones are for the Kleinbeck family, in which an entire family of 12 perished in a freak accident in October 1900, crossing the aptly named Republican River in a farm wagon during a flood. The small headstones are for each individual family member (my Grandpa and I recovered the burial plot from an overgrowth of lilac brush when I was in seventh grade): 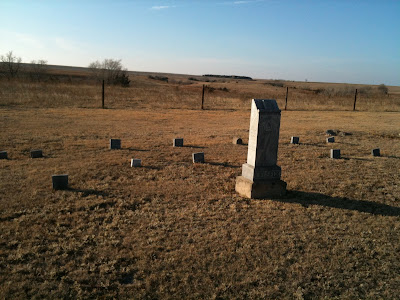 Some pictures of tombstones for my ancestors from the Mües side of the family. Note my one Great-Uncle who served with the First Armored Division in World War II, seeing horrific action in North Africa and Italy, yet making it home safely. 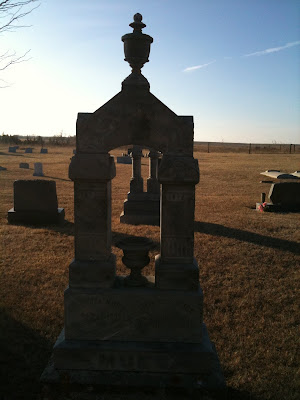 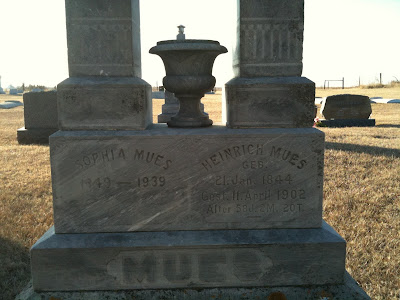 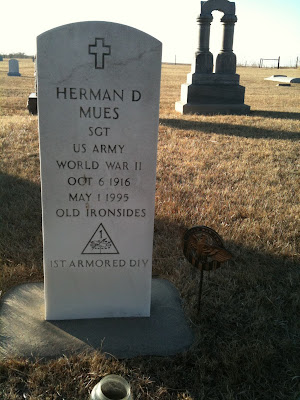 My ancestors from the Hormann side of the family. Note one Great-Great-Uncle who served in World War I, and eventually died from the lingering effects of German mustard gas attacks: 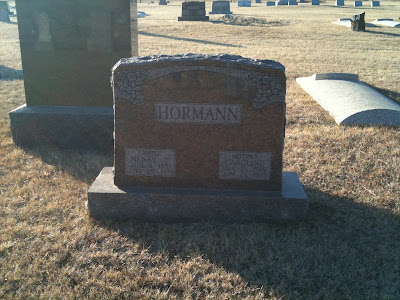 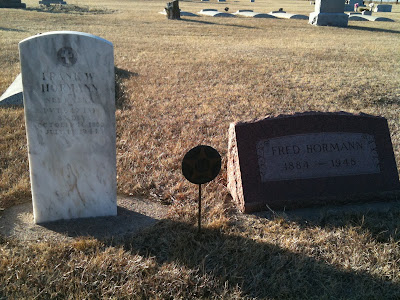 Some of my ancestors from the Niemeier side of the family: 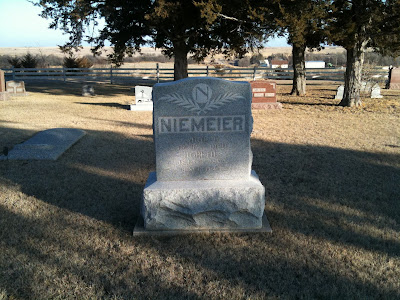 Now, onto my Mock family ancestors.  First is my Great-Great-Grandpa Henry (note the delicate oak leaf scroll work which is suffering from years of exposure to the Nebraska elements; also, his wife—my Great-Great-Grandma—is buried next to Henry, yet her name has never been inscribed on the monument, whether through oversight, economic issues, or the chauvinism of the day): 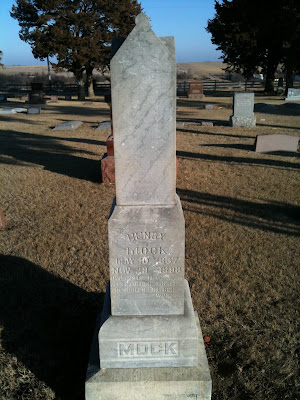 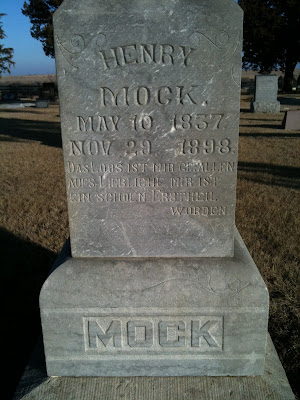 Next, my Great-Grandparents, Carl & Mary Mock, my first ancestors born in the United States: 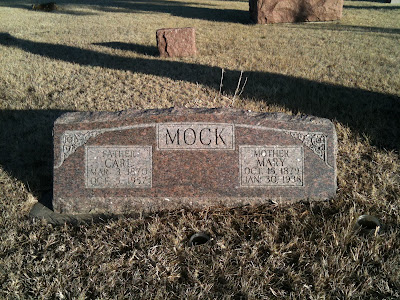 Finally, the current Mock family burial plot, which has tombstones for my Grandparents, my Great-Uncle, and my brother; my parents will eventually be buried to the right hand side of the photo. Even though my Grandpa bought the plot ages ago (as in, before I was born), note how it is in the most "modern" segment of the cemetery: 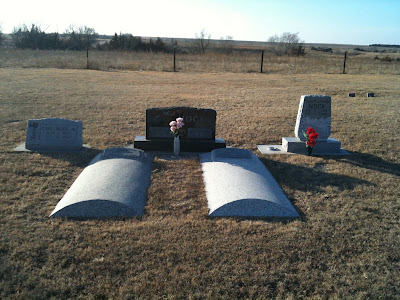 Close-up of the tombstone for my great-uncle Carl, who was mildly retarded after a childhood viral infection and fever. I remember doing farm work with Uncle Carl and playing cards with him at family gatherings. My Grandpa basically looked out for Uncle Carl until he passed away, after which my Dad took over that caretaking role. Uncle Carl was a kind man who, though none too sharp, still could play a mean game of pitch. Incidentally, the windmill on his tombstone is a dead ringer for several windmills I operated as a kid, providing water to cattle out in the pasture: 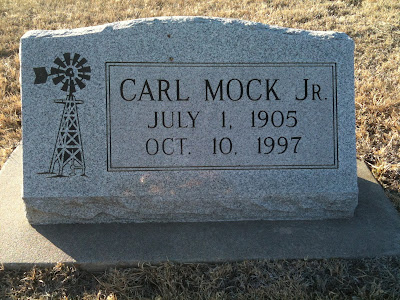 The tombstone for my Grandpa and Grandma. Grandpa died unexpectedly of a heart attack when I was about to start eighth grade. Grandma, like her siblings, made it into her nineties, rather impressive for someone who grew up on the prairie without electricity or running water until many years into married life, and who endured the Great Depression. Grandpa and Grandma's Golden Anniversary may have been the last of many great family gatherings in my childhood (I have 12 cousins on my Dad's side of the family, not to mention four Aunts who can cook like nobody's business): 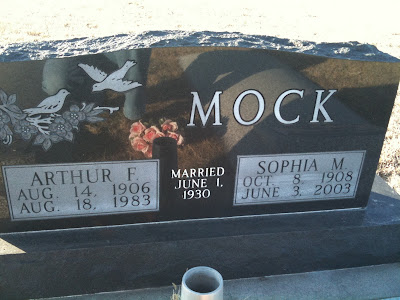 Finally, we have a close-up of the tombstone for my older brother Scott (whose passing is discussed in this prior post). Scott lived in Colorado after college, and was always a nature junkie, so I love the peaceful pastoral scene for his tombstone: 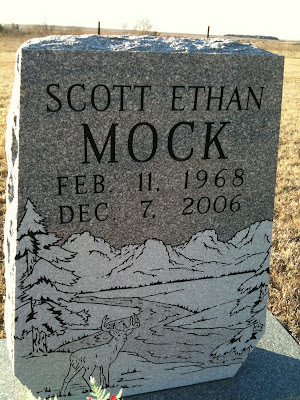 Thanks for indulging my trip down nostalgia lane. We'll return to your regularly scheduled poker hijinks programming in the near future.
Posted by Grange95 at 1/03/2011 02:41:00 AM