As you may recall, Ironman of Poker VI ("IMOP") is less than 50 hours away from its official kickoff. Cruise director Santa Claus has released the official prop betting sheet, which is seriously streamlined, the better to speed his last minute hungover scorekeeping chores. Still, part of me misses the good ol' days of Byzantine scoring sheets that required more recounts than a Florida election, where one Ironman could be declared victor during the final breakfast at the Grand Lux in Venetian, another take the title at the Allegiant Air gate, and yet another be named ultimate champion on the ground in Iowa.

Taking a look at the official prop bets, there are a few obvious sucker bets:

As for value bets, here's my analysis:
In true Ironman fashion, the taunting and prop betting is in full preseason form. Today, Fat Jesus sent out an important reminder to the Ironmen to avoid being arrested prior to arriving in Vegas:

We pause this countdown for the following public service announcement:

(a) No person may drink any alcoholic beverage aboard an aircraft unless the certificate holder operating the aircraft has served that beverage to him.

(c) No certificate holder may allow any person to board any of its aircraft if that person appears to be intoxicated.

(d) Each certificate holder shall, within five days after the incident, report to the Administrator the refusal of any person to comply with paragraph (a) of this section, or of any disturbance caused by a person who appears to be intoxicated aboard any of its aircraft.

Thank you, we now continue with the countdown...3,343 minutes.

Perhaps the Ironman most in need of this reminder, Colt, replied:


Here is what I read:

(a) Don’t show the stewardess your mini bottles of alcohol.

Here's hoping all the Ironmen avoid any hit to their bankrolls from the bail bond leak.

Finally, today Ironman Barbie and I engaged in a best of seven prop bet matchup in Words With Friends, the iPhone version of Scrabble. The stakes were high—steak dinner at STK, the trendy steakhouse in the swanky new Vegas Cosmopolitan resort. We each won one blowout, but the remaining five games went to the last few tiles. After Barbie and his alligator blood pulled off a miracle finish with a triple score "QI" in Game 6, it all came down to Game 7, as any good rivalry should. With all the tiles out, Barbie played "WANE" to take a slim but seemingly insurmountable 19 point lead. Yet, I had one last trick up my sleeve. Channeling my inner Tarvis Williams, I found a stunning 70 point play for the improbable victory: 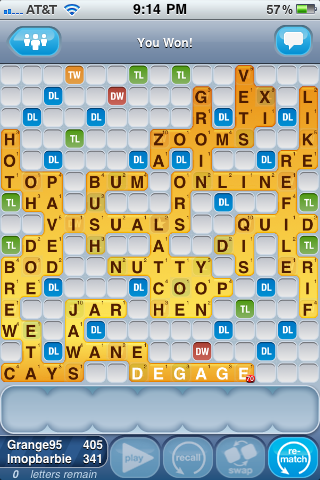 I'm thinking a medium rare porterhouse with black truffles and chimichurri sauce, with sides of creamed spinach and mac & cheese. Oh, and break out the wine list, baby! Grange needs a good Shiraz!

I can't wait for Wednesday!