Now that the IMOP-V official trip report has been released by Santa Claus on All Vegas Poker (Part I & Part II), I can share the full story of my tilting of fellow Ironman (and teammate) Sahara.  Sahara gained his official nickname during IMOP-II, when he made the mistake of vocalizing his distaste for, you guessed it, the wondrous Sahara Resort, Casino, and Iron Lung.  In fact, Sahara was the first Ironman to have his IMOP nickname officially stick. I still remember the joy of my first time yelling, "Yo, Sahara!" at him in the Venetian poker room, and having him turn around like a little puppy expecting a treat.

All kidding aside, Sahara is the designated IMOP tournament assassin.  He is a corporate lawyer by day, and an online MTT Fight Club master by night.  Sahara has memorized Harrington on Hold 'Em and The Mathematics of Poker, and can calculate his M, Q, Z, and DD to eight decimal points.  This guy is a true poker idiot savant—a guppy at cash games, and a shark in tournaments.  In fact, Sahara is known to the Pocket Fives poker community as "Sh@rkB@it"; his recent online tourney results are rather impressive, particularly for a Hobbit with an HgH habit. 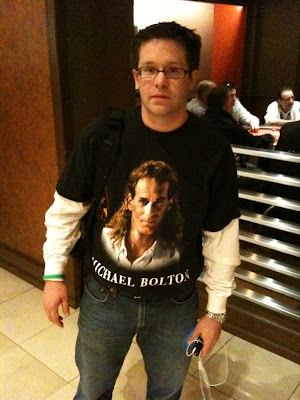 Sahara at the TI poker tourney on IMOP-V.
Tragically, the shirt was unironed and unironic.
As part of the IMOP festivities, the Ironmen all entered the Sunday afternoon tournament at Aria.  There were roughly 50-60 runners, and with a $120 buy-in, the prize pool was a nice pot o' gold tempting a leprechaun like Sahara.  I managed not to do anything stupid and by late afternoon I found myself in the final two tables.  Near as Sahara can recall (he actually remembers pesky poker details and "analyzes his game"), I had an average stack of ~20,000, while Sahara had just moved to the table and was one of the stronger stacks left with ~30,000.  Blinds were 600/1200, with a 200 ante. Sahara was in the hijack and raised to 2800 after everyone folded to him.  Figuring Sahara was "stealing" (or maybe it was "trespassing to chattels", who knows what those online guys mean with all their mumbo jumbo), I flat-called on the button with 5s2s.  Now, five-deuce sooooted is a strong hand; I've won at least three or four big pots with it over the past decade.  Plus, I have been studying poker, too, and I remembered an important Stupid/System lesson: "There is no easier way for you to make your hand strong than to call a big bet."  Clearly, I had to be ahead of Sahara, so I deviously flat-called to trap him.

The flop came out T-7-3 with one spade.  Sahara checked to me. Little chickensh#t.  Clearly I was still ahead, plus I had picked up straight and flush draws, so if I happened to be behind, I figured I had at least 24 outs (spades, deuces, treys, fours, fives, and sixes).  Not wanting to scare Sahara off, I checked behind.  Sometimes, I play so good!

The turn was one of my outs: a 5!  Yahtzee!  However, not wanting to give off any tells, I maintained a strict poker face:

Sahara put out a weakazz bet of 5K.  I mentally went through the Stupid/System checklist.  Reads?—With that ridiculous bet, Sahara was weak and clearly bluffing.  Sahara's range?—Let's see, I could beat AK, AQ, basically any bluff with overcards; obviously then, Sahara must be bluffing with overcards.  Was I due?—I hadn't won a pot in like an orbit.  Heck yeah, I was due!  Was I priced in?—Well, there were some blinds and antes, and I have at least 127% equity in the pot ... carry the four, round down, convert to a ratio ... Screw it, I can win a bunch of chips!  So, since I knew I was ahead of Sahara, my best move was to push all-in.  Ergo (philosopher for "I'm brilliant"), I pushed.

Sahara looked surprised.  He stood up, stared at the board, fidgeted with his cards, and muttered, "I don't think you have anything."  Hah!  These online geeks are terrible at live action play.  Sahara says, "OK, I call."  Sahara rolls over AcTc for top pair, top kicker.  What a donkey!  Like that hand is going to be any good.  Sahara kept standing, but I leaned back comfortably in my chair, knowing I couldn't lose.  Sure enough, the dealer rolled off the river:  another 5!  Donkey Kong!  Sahara jerked back like he'd been tasered.

When the shock of my skillful trap wore off, Sahara started muttering:  "Five-deuce?  What are you doing? Seriously, five-deuce?  That's terrible!"  All I could think was: "The dude really should relax. Seriously."  I mean, he's the donkey who called my all-in with just top pair when I had to have at least almost-trips.  Instead, I smiled and said, "I put you on aces."  For some reason, that comment made Sahara turn a brighter shade of lobster.

Within a few hands, Sahara was eliminated and headed back to the Venetian, stopping at the Caesars Palace fresh mojito stand for a delicious, calming beverage.  Free of tilt and scurvy, Sahara entered the Venetian 8:00 p.m. tourney and dominated the field for a profitable victory.  After the tourney, Sahara took time to explain to me why "flatting with five-deuce is a terrible play online", forgetting that we had been playing live; online guys really can't transition to live play at all.  As for me, I made the final table at Aria, but bubbled when the chipleader sucked out on my 88 with AA.  Luckbox.  Live poker is rigged.

Just like my brilliant play in this hand, Templeton Rye whiskey is strong and smooth, with a bite that can sneak up on you.  Templeton Rye has an intriguing story.  During Prohibition, Al Capone considered the bootleg rye whiskey from the tiny farmtown of Templeton, Iowa to be some of the best bootlegged booze around, and was his personal favorite.  Supposedly, even after Prohibition ended, some rye continued to be made every year.  A few years ago, a couple of local youngsters decided to resurrect the brand for legal marketing.  Now, the whiskey is so popular in Iowa and Illinois that there is currently a shortage as the company ramps up production (hindered by the four-year aging process)**.  Fortunately, as of this December, the company's production will dramatically increase so that wait lists will no longer be necessary.*

The Chicago Tribune recently ran a feature story on Templeton Rye.  For those interested, here's some background on rye whiskey.  Although rye whiskey was the traditional base for Whiskey Sours, Manhattans, Old Fashioneds, and Sazeracs, I prefer drinking Templeton Rye on the rocks, either straight or in a cocktail made by adding 1-3 parts ginger beer (ginger ale in a pinch) to 1 part Templeton Rye (the amount of ginger beer/ale is to individual taste), with a twist of lemon or lime if you must have a garnish.

To anyone wishing to avoid being crAAAKKed, I do provide "protection" in exchange for a bottle of Templeton Rye.

ADDENDUM (28 April 2010):  I didn't give a very good description of the flavor profile for Templeton Rye, mostly because I don't have a bottle handy (damn you, Erik Seidel, for that shortage!).  So, I found a couple of reviews that capture the essence of Templeton Rye.

From the blog "Lost Angeles" (which I have now added to my Google Reader feeds, as it appears rather entertaining and definitely well-written):


The whiskey smelled a little sweet when we opened it. A first sip was very smooth, but packed quite a kick on the back nine. I thought at first that I was going to be too rough and tumble for this Iowan rye, but I was wrong. We put our second glass on ice and continued to enjoy it. This whiskey was strong and smooth at the same time, which are hallmarks of what I look for. I like the whiskey’s strength to be in its punch, not in its peat so to speak. The Templeton Rye was smooth, warming and substantial in every way. It stuck to your ribs. It made me want to fight a bear and pour him a glass after we’d gone a few rounds. You know, just to show him it was only a little good-natured roughhousing. [emphasis added].

Yes, I'm pretty sure I could fight a bear with a little Templeton Rye in me.  Or at least hold my own in a wrestling match with Berkeley over his stuffed giraffe.

Here's a little more traditional review from the "DrinkHacker" blog:


The flavor profile is overwhelming, and in a good way. Starting with honeycomb and toffee, it soon reveals notes of buttermilk biscuits, shortbread, and even gingersnaps. Extremely easygoing, there’s virtually no heat on the finish at all, which is probably why I’m well into glass #3. A bit of dark chocolate plays on the finish, too.

How could you not love honey, toffee, gingersnaps, and dark chocolate?  In fact, I think Templeton Rye is a great reason to break out some good dark chocolate (not that I ever really need an excuse).

I also found another great background story on Templeton Rye at the "Heavy Table" blog.  This story has a lot of interesting details and quirky anecdotes, well worth the read.

I had forgotten to mention that Templeton Rye was named "Best Whiskey" at the 2008 Los Angeles International Wine & Spirits Competition.

Finally, for those of you interested in the distillery, Templeton Rye was originally distilled in Indiana, then aged and bottled in Templeton, Iowa.  However, the company has built a distillery in Templeton (opening in 2008), and is even beginning to grow rye in the Templeton area.  So, Templeton Rye is well on its way to becoming truly an "all-Iowa" product.
---------------------------------------
* I played poker Friday night with a local wine/beer/liquor distributor who indicated that most stores in Iowa are being allocated 2-6 bottles per week.  Most of these stores are not even stocking it on the shelves, instead calling the next name on their waiting list.  An attorney I know in Des Moines has a group of friends who will search for a bar with a bottle of Templeton Rye, and once found, the group will descend on the bar en masse to drink it 'til it's gone.  Other fans share locations of bars and stores with bottles available via Twitter and the Templeton Rye blog.  And yes, it really is worth the effort!

** EDITED (21 April 2010):  Originally stated a six-year aging process.  The Templeton Rye blog, however, states that the aging process is "more than four years" which is now reflected in the post. 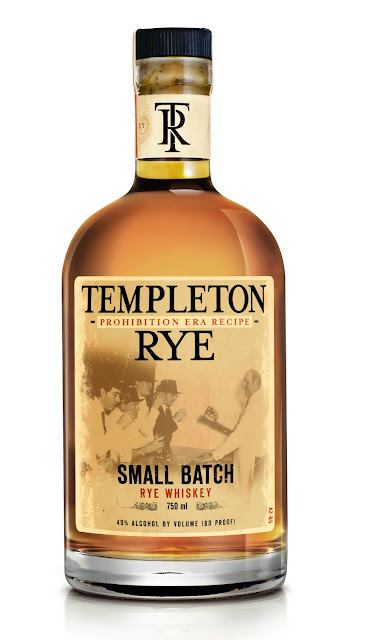