Welcome to a new regular (but likely not actually daily) feature, the D-Bag O' the Day!  The D-Bags of the world deserve special recognition, particularly when they are notably annoying.  So, they will be featured here semi-regularly, as well as added to a sidebar.

Our first honoree goes to a self-absorbed ungentleman I ran across today.  I went to lunch with one of my law partners, and we decided to stop at Smokey D's BBQ in the downtown Des Moines skywalk.  Smokey D's has excellent BBQ at a good price, not to mention several award-winning sauces (I love the "Sassy" and "Fiery" sauces).  The skywalk location is pretty no-frills, but you go there for the food, not the ambience.  Their restaurant is also fairly small, with only 10-12 tables, most of which only seat 2-3 people, and a few that seat 4-5.  During the lunch rush, seating is at a premium, as Smokey D's is understandably a popular spot.  If I am eating solo, I get my food to go, but today, my partner and I wanted to eat at the restaurant.  So, we went after the main rush had passed, stood for five minutes in a fairly short line, but when we got our food, there were no open tables.  So, we stood and waited for an opening, along with a few other people.  Here's where our D-Bag earned his stripes ...

A table, one of the few tables for 4-5 people, opened up.  D-Bag swoops in and captures the table ... for himself.  That's right, he took a big table and tied it up for his own use.  Now, other people had waited longer for a table, including a group of four.  Several other groups were in line for food.  But never mind all that, D-Bag happened to be closest to the table, so he took it.  As if to give a big ol' middle finger to those still standing, D-Bag decided to take his sweet time to eat, then lingered at the table after he finished eating to enjoy some web-browsing on his cell phone.  To be fair, there were a couple of groups of minor league d-bags who tied up tables with post-lunch chitchat (for gawd's sake, go walk around!), but our major league D-Bag took it to an entirely new level.  So, congrats to our inaugural D-Bag O' the Day! 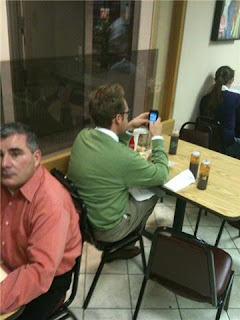