Created in 1977, the North American Gay Amateur Athletic Alliance (NAGAAA) is a 501c(3) organization that promotes amateur sports competition, particularly softball, for all persons regardless of age, sexual orientation or preference, with special emphasis on the participation of members of the gay, lesbian, bisexual and transgender (GLBT) community; and to otherwise foster national and international sports competition by planning, promoting and carrying out amateur sports competition.

NAGAAA sounds like a nice way for athletically inclined GLBT folks to enjoy some sports-related community bonding.  Also, the gay softball leagues allow straight people to play as well, which leads to increased tolerance, not to mention unlikely friendships.  As a good example, one of my close college buddies and roommates moved halfway across the country after graduation.  Doug was a typical small town Midwesterner by background, played every sport imaginable, and straight to the point where I doubt he had ever met a gay person.  When he got to Florida, his co-workers were gay, yet they hit it off over sports, and within a couple of weeks, Doug was a star player in the Tampa area gay softball league.

So why am I throwing NAGAAA  under the D-Bag Express?  Well, it turns out that even gays can be intolerant and discriminatory when it comes to sexuality.  Apparently, at the 2007 Gay Softball World Series, a team from the Seattle area placed second, but was challenged by another team(s) for violating a rule limiting the number of "heterosexual" players to two per team.  How did NAGAAA handle the allegations?  According to a discrimination lawsuit recently filed over the incident:

Each of the three plaintiffs was called into a conference room in front of more than 25 people, and was asked "personal and intrusive questions" about his sexual attractions and desires, purportedly to determine if the player was heterosexual or gay, the lawsuit alleges.

Now, NAGAAA's rules only reference "heterosexual" and "gay" as possible sexual orientations, and the distinction is drawn based on the "predominate sexual interest" of the player, apparently making individuals who identify as bisexual "pick a team", so to speak.  So, these three gentlemen, who had publicly declared themselves gay (for purposes of softball, at least), still had to prove they were gay, or at least mostly gay, to a bunch of other gay people. When they were deemed insufficiently gay, their team was disqualified.  So much for "promot[ing] ... softball, for all persons regardless of ... sexual orientation or preference, with special emphasis on the participation of members of the gay, lesbian, bisexual and transgender (GLBT) community."  It's good to have goals.

First off, how do you even decide if someone is "gay enough" to play softball?  See how many fashion designers they can identify in 30 seconds?  Have them identify interior decorating faux pas in pictures?  Ask them to create a Madonna-Lady GaGa mashup, and then choreograph it?  Decide if they run or throw "like a girl"?  Oh wait, the gay community is (correctly) opposed to such trite and offensive stereotypes.  So was the questioning more a matter of keeping score while the players were asked if they would rather sleep with Ricky Martin or J-Lo ... Paul Walker or Jessica Alba ... Will Smith or Beyonce' ... Joaquin Phoenix or Reese Witherspoon?  Or did it come down purely to an over/under on sexual encounters—"you must have sucked this many c---s to play our reindeer games"?  The entire premise of "gay enough" is simply absurd.  Let's be blunt—if someone is willing to self-identify as gay or bisexual, and face the negative societal attitudes that still come with such self-identification, well in my book, that's plenty gay.  I seriously doubt the NAGAAA is going to see a huge influx of faux-gay players who can't resist the opportunity to win a gay softball title.

Even setting aside the ridiculous complaints and resulting sexual inquisition, the NAGAAA rule itself is way out of line.  Sports are one area in society where gays still face some degree of systemic discrimination.  Trust me, it's tough to be gay and to love sports.  But if you don't believe me, take a look at a list of prominent "out" gay athletes, and note how many waited to come out until after their retirement from competition.  So when straight guys not only accept openly gay athletes but also accept them as teammates and friends, why on earth would gays want to limit straight participation in their leagues?  What better way to break down gay sports stereotypes and build stronger gay-straight ties in the sports community than to encourage even more straight guys to participate in predominately gay sports leagues?  The NAGAAA's rule prevents the very acceptance of gays in sports that the organization is trying to promote.

Besides, doesn't the NAGAAA realize that good switch hitters are always in great demand? 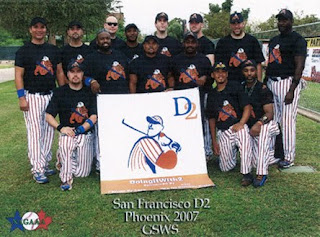 Picture of the DQ'd softball team.  Can you identify the not-gays?
(Answers and some interesting reader comments at Towleroad.com).

ADDENDUM (22 April 2010):  The three DQ'd players apparently were suspended for a few months, but later reinstated with threats made to ban the team from NAGAAA competitions if the team subsequently were found to have again violated the "two heterosexuals" roster limit.  The players are seeking not only monetary damages (a requirement for federal court jurisdiction in this type of case), but also are seeking injunctive relief, including a court order to strike the use of "gay" and "heterosexual" labels from the NAGAAA rules, as well as to abolish the "two heterosexuals" roster limit.  The plaintiffs are being represented by the National Center for Lesbian Rights (NCLR), and the full complaint is available online.  Incidentally, a big high five to a gay rights advocacy group willing to stand up for folks who have been wronged by a gay organization on the basis of sexual identity.

ADDENDUM (23 April 2010):  The NAGAAA put out an "open letter" response to the lawsuit today.  Over at the Boneyard, blogger "davyjones" effectively skewers the NAGAAA's obsessive use of "gay/lesbian" and an apparent head in the sand approach to the existence of bisexuals.

I also noticed that NAGAAA made several references to "security" and "safety" in its PR release.  Perhaps in the distant past (the NAGAAA dates to 1977) there were concerns over safety for gay athletes, but if there is a serious problem of gay-bashing straight softball players, I certainly haven't heard of it.  I think this purported "safety" justification is a pretty small fig leaf to hide behind.

Frankly, if the NAGAAA wants to exclude straight folks for safety (or any reason), then they need to exclude all straight folks (why allow two scary straight players per team?).  The fact that NAGAAA allows some straights to play pretty well eviscerates any of their purported justifications for their silly rule.  The NAGAAA should be honest and admit their rule is based on an old (and untrue) stereotype that gays are not as good at sports as straights, and straights must be "ringers" whose participation should be limited.  The original protest seems founded on this very stereotype; the protesters didn't care that they were losing to a team with bisexual or straight players, they were upset that those players were giving their opponents some kind of "unfair advantage".  Are we as gays really going to buy in to this kind of bovine excrement?  The NAGAAA should be ashamed of having this rule, and the protesting team should be ashamed for protesting based on that rule.

Just for the record, since he wasn't given his own individual post, our D-Bag O' the Day Award (v. 1.2) went to this gentleman for intentionally vomiting on an 11-year old girl at a Phillies game.  You stay classy, Philadelphia! 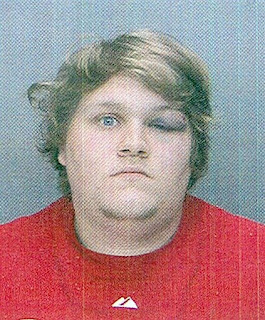