Apparently, FIFA (or the D-Bags running FIFA) hates attractive women in short skirts.  At least, that's the conclusion I reached, upon hearing that South Africa has arrested two women for taking part in (and possibly organizing) an "ambush marketing campaign" where 30 attractive young women in orange mini-dresses (orange being the Dutch national team color) attended the World Cup match between the Netherlands and Denmark, and were promoting a Dutch beer company.  I suppose it's possible FIFA was merely trying to protect the multi-million dollar investment by its official beer sponsor, Budweiser, but that is a terribly cynical view.

You be the judge.  Do these women look like hardened criminals? 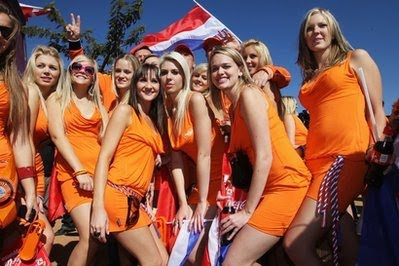 Of course, I suppose a certain segment of my readers might be able to imagine these fine actresses starring in a romantic comedy based in a Dutch women's prison ...
Posted by Grange95 at 6/16/2010 11:54:00 AM