Last night, Ironman of Poker (IMOP) cruise director and Templeton Rye hunter Santa Claus was in town for business, so we met up for an after work session of $1/$2 NLHE at the Meadows ATM.  Now Thursday evening action is usually excellent, as there is a tournament at 7:00 p.m. that is generally well-attended, along with a regular $5/$5 mix "big game" that brings out all the degenerates.  The room was busy when we arrived around 5:00 p.m., but we got into a game after a short wait.  Management, however, gets an "F" in logistics for failing to schedule enough dealers.  The big mix game was full with a list, the $2/$5 list was 20 deep, and the $1/$2 list was 10 deep, but no tables could be opened because the dealers were already "locked in" and no additional dealers were scheduled to arrive to open new tables until 6:00 p.m.  Oh well, not my problem!

The game was initially rather uneventful, other than Santa and I needling each other.  Most of the players were fairly tight, and short-stacked, making the game unsuitable for my usual crAAKKer tactics.  I started having flashbacks to the horrors of my last session at the 'Shoe, where I proved the old adage about blood and rocks.  To make matters worse, we had two obnoxious players in the game—one was a crazy looking dude who tried to bully the table and complained every time he got slapped down, and a "poker professor" who had to deeply analyze each and every hand like a skinny and non-funny version of John Madden.

Crazy dude bullied his way to a $1,000 stack, then promptly gacked it all back and left the table whining about how badly we all played.  For all his self-proclaimed poker smarts, the professor found himself rebuying after spewing chips making a number of rather questionable plays.  By 10:00 p.m., our table had dropped to nitty five-handed play.  Santa and I had each taken a decent chunk of chips off of crazy dude during his supernova, so we were debating racking up our profits (about a buy-in each) and heading to my place to enjoy some pizza and Templeton Rye when we heard the best sound in the poker universe—loud, drunken laughter.

Three guys in golf attire were sent to our table.  Turns out they had been golfing in a charity event all day, and had been "boozing it up since noon".  Excellent.  Two of them ("Andy" and "Billy") were regulars, and the third ("Chip") I have seen on occasion.  A guy already at the table ("Eddie") was also a friend of the crew.  As soon as the crew sat down, the game became a "strap on your seatbelts, keep your hands in the car" roller coaster ride.  The usual hand went down something like this:
Now, at this point, the game becomes quite easy.  In fact, it was so easy Santa went to the bar to get a drink, realizing there would be no more tough decisions the rest of the night.  Essentially, Santa and I had position on the entire crew, and we simply sat back and waited for premium hands.  Then, we would limp-reraise preflop, and bet big on flops we hit, knowing we were going to be way ahead of the crew's range.  No need for a degree in astrophysics to play this game!

My strategy started off rather poorly, when I ran my 99 into Billy's TT, helping him build up a $1,500 stack.  Then, a weird hand happened that gave Santa and me an IMOP flashback.  Billy was in seat 1, next to the dealer.  He was involved in a big pot, and was facing a big river bet when he slid his cards forward.  The dealer mucked the hand, and started to push the pot.  Suddenly, Billy went absolutely nuts, screaming, "I had King-Ten of spades!  I f--king had King-Ten of f--king spades!"  If true, he would've turned the nut straight and rivered the second nut flush (and I fully believe he in fact had the King-Ten of f--ing spades).  But it looked to me and even his friends that Billy had mucked his hand.  The floor came over, ruled his hand dead, and Billy kept pacing around, screaming about his "King-Ten of f--king spades!" and even tried to dig his hand out of the muck.  The floor, Brandon, did a great job of keeping things calm while standing his ground.  Billy kept arguing, then suddenly blurted out, "Awww, how can I be mad when Brandon is smiling at me so cute?"  His buddy Chip dryly observed, "Billy gets a little gay when he's drunk."  Kudos to Brandon for not only not kicking Billy out, but also getting Billy to calm down, then running interference with the gaggle of security guards who had come into the room to investigate "the disturbance".  Trust me, if Billy had gone home, his buddies—and their cash—would have gone with him.  Instead, the house, the dealers, and the players all kept making money, which is a wonderful thing.

Billy was drunk enough he sometimes had trouble keeping focused on the action, and since he was near me, I would help keep the action flowing by reminding him when it was his turn to act, which led to this exchange that had me laughing:

Me:  [pointing to Andy]  "Your best buddy down there."

Billy:  "Well, it was his first wedding, before the divorce."

Now many players fear or are annoyed by maniacs, who admittedly do upset the game.  But they serve a very useful purpose—they pry chips away from rocks and redistribute them to the table.  Case in point was an old guy in seat 10 who had bought in for $100, played one hand every hour, and always had a top five hand when he played.  Old Guy had built up a $600 stack, but in the course of two hands, Billy and Andy took it all.  The big hand was when Andy raised to $30 preflop, Old Guy reraised to $100, Andy shrugged and called.  Flop was all low rags.  Old Guy bet $100, Andy called.  Turn was a low blank, Old Guy shoved for about $200, Andy snap called, having turned two pair with 74o.  Old Guy rolls Aces, natch, and fails to catch up.  God bless the maniacs!

Billy quickly demonstrated the life cycle of the drunk maniac—build a big stack with improbable junk hands, get slapped upside the head by math, bleed all the chips back, rebuy, gack those chips off, hit the ATM, lather, rinse, repeat.  Billy probably pumped four buy-ins into the game, then borrowed another two buy-ins from Andy and Chip.  Andy put four buy-ins on the table before starting to build a monster stack, mostly at the expense of Billy and Chip.  By the end of the session, the action at our table was easily heavier than the $2/$5 NLHE or the $5/$5 "big game", with many pots running over $500, and multi-player all-ins occurring a couple of times per orbit.  As for Santa and me, we simply collected our share of the maniac tax, picking big hands to play, waiting for favorable flops, then punishing the maniacs with check-calls and value bets.  Taking down a limped pot with a huge limp-reraise squeeze play would generally net $100+ in profit, which was merely an appetizer for the big pots where Andy or Billy would see a flop.  I won three monsterpotten with flopped trips, while Santa was a little more conventional, using Kings, Yaks, and a couple of AK hands for the bulk of his profit.  Speaking of profit, while the drunk crew provided plenty of entertainment, the real fun in poker is in stacking chips from monster pots.  As you can tell, we had a blast! 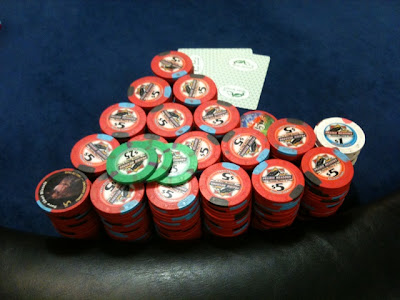 My stack about an hour before leaving.  By the time I cashed out,
I had added three black chips to the mix.  Note the lucky
"Godfather" chips in the lower left; it was a full stack by cash out! 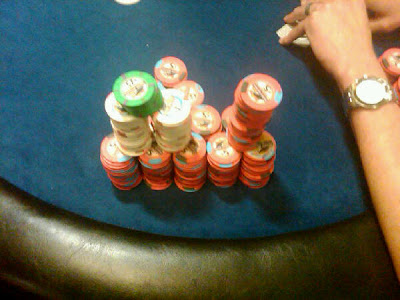