The Heart of a Champion

Going into this Final Four, there was great wailing and gnashing of teeth among the sports media bemoaning the fact that not one but two "mid-major" teams (i.e., college sports' hoi polloi) not only made it to the semifinal round, but also were matched against each other, guaranteeing one of them a spot in the finals and a real shot at an improbable title. Basketball's power brokers don't mind if the common folk scrub themselves up and sit quietly in the corners at the party, but when it comes to the Big Money portion of the Big Dance, they want to see basketball's bluebloods strutting their stuff. To basketball's self-appointed guardians, a mid-major upstart is a nice little storyline, but an actual mid-major champion would make a farce of such a serious event.

The interesting thing is that many of the same pundits who decry the increasingly common mid-major run deep in the Big Dance also openly advocate for increasing the number of teams allowed in the tournament, on the premise that a field of 68 somehow shuts out a "deserving" team. At first blush, VCU's run this season from one of the last two at-large teams into the field to a Final Four slot with a real shot at the title would seem to vindicate the concept of expanding the field. But what tournament expansion advocates really want is more slots to fill with teams from traditional power conferences. Power conferences (and their schools' alumni, administrators, and coaches) crave the added revenue (and job security) which attach to making it to the Big Dance, compounded nicely if several conference teams make deep runs.

Let's be clear about one point, however. Expanding the tournament field is not about identifying the "best" team as a national champion. Letting another 28 teams qualify for the field means adding another 28 mediocre teams that had rather, well, mediocre regular season results. For example, a team that went .500 in its own conference can't possibly be considered an elite team worthy of being called "champion", but somehow it's a travesty to many in the media that such teams usually fail to make the tournament. Imagine the horror if such a laughingstock entry actually combined some beneficial matchups with some fortuitous chaos from upsets of the true powerhouse teams and made an improbable six game championship run. Well, I suppose if that team were a basketball blueblood like UConn, then the media might politely overlook the anemic regular season performance while applauding the team's tournament championship. But heaven forbid a team like VCU or George Mason might actually sneak into the tournament and then get a little hot and a little lucky on a run to the title.

What college basketball pundits fail to recognize is an obvious fact of life in the world of poker: Expanded fields dilute the chances for the truly elite players or teams to win. It's no coincidence that John Wooden's marvelous run of 10 NCAA basketball titles in 12 seasons at UCLA occurred prior to 1975. Prior to 1975, only conference champions made the field, keeping strong second-best teams from strong conferences out of the tournament. Also in 1975, the field size expanded to 32 teams; UCLA was essentially seeded into the Sweet Sixteen round every season it won a title under Wooden.

UCLA's dominance in the pre-expansion tournament is analogous to the WSOP. In its early days, the fields for the WSOP were dominated by elite players, and elite players--Amarillo Slim, Doyle Brunson, Stu Ungar, Johnny Chan, and yes, Phil Hellmuth--were consistently in the running for the title, with the occasional Robert Varkonyi sneaking in. But with the "Moneymaker boom" in 2003, field sizes increased dramatically, and the number of elite pros making deep runs has dwindled markedly. As many in the poker world have noted, with deep fields comes greatly increased variance, and the elite players are more vulnerable to elimination by a no-name, less-talented player on a hot run. Goodbye Phil Ivey. Hello Jamie Gold, Jerry Yang, Darvin Moon, and Steve Dannenman--the mid-majors of the poker world.

A tournament champion--whether poker or basketball--is not about identifying the best player or team*; a tournament champion is the player or team which has the right combination of skill and good fortune at the right time. If you want the "national champion" to be guaranteed to be a truly "deserving" team, then the right solution is to limit the participants in the tournament to a very few of the very elite. If college basketball wants to avoid an "undeserving" mid-major champion, the best solution is contraction of the tournament field. In other words, college basketball needs to scrap the Big Dance and start a Basketball BCS.

Until then, I'm going to keep rooting for the mid-majors.

* Head to head combat, with the current champion taking on challengers, is the only clear cut method to determine a "champion" who is also "best". Which means that I am the three-time belt-winning champion of Words With Friends versus "Real Dawn Summers" of Clareified fame. How 'bout them apples?!? 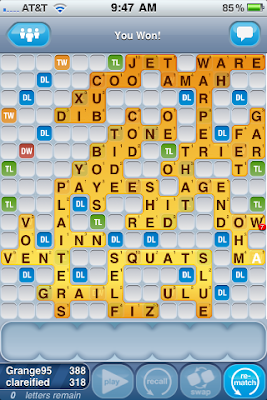 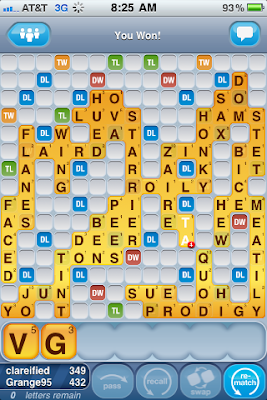 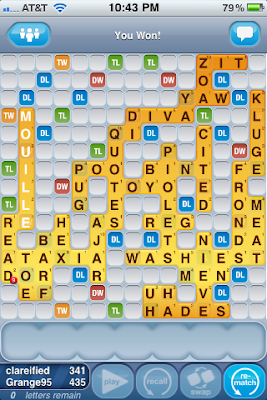 Posted from my iPhone using BlogPress.

Email ThisBlogThis!Share to TwitterShare to FacebookShare to Pinterest
Labels: Philosophy