Note: The official IMOP trip report will be posted in randomly intermittent installments. The author of the report is our cruise director, Santa Claus, with occasional editing by yours truly. Enjoy!

Hard to believe we’ve been doing this for six years now. It’s fair to say these trips are aging us before our very eyes. Yet, this is the first year we’ve had every person back from the prior year’s trip (though the reason it’s “12-ish” is because of the in and out nature of some of our participants). For those who haven’t followed our saga through the years, we’ll introduce the players via the way they made their way to Vegas:

Car 1 left downtown Cedar Rapids at 9:05am. Santa, the organizer of all the fun, was able to ride over to Des Moines with Mr. Chow, who had coerced some work associates to schedule a meeting there as a way to not have to drive over. The plan was to spend the afternoon playing cards at Prairie Meadows Racetrack, Casino & ATM before figuring out a way to get to the airport for the evening flight.

Car 2 left Cedar Rapids later that morning with Barbie and Bonnie, who had met for a bloody mary breakfast, along with Fat Jesus and Colt. They also meet up at Prairie Meadows and cards were played. In true IMOP fashion, we begin coolering and beating on each other (including a ridiculous slow roll by Mr. Chow against Fat Jesus) before we even get on the plane. But, between tilted locals and snickers at Bonnie for getting down two buy ins, he used tilt to his advantage by some aggressive blackjack to make a nice comeback. Amazingly enough, as the group was preparing to board their flight, Bonnie says, “Crap – my phone!” and takes off in a mad dash back to the restrooms where we finds his phone right where he left it. Apparently he was trying to get his traditional brain-lock lost item out of the way at the start of the trip, rather than at the end.

Grange had already flown out of Des Moines early that morning to get his usual head start on the festivities and had already tilted off a couple of young DB’s and their adoring girlfriends by flopping a wheel and a set of Yaks and being up a grand before anyone even arrived.

Sahara had to blow the snow out of his driveway in Milwaukee one more time before catching his plane. He promised to tweet his bankroll JRB style, but much like his brother Lucky, he failed to live up to his boast of Tweet-frequency. Speaking of Lucky, he was just landing after having flown in from Cedar Rapids, traveling separately because of a work conference again this year which would keep him around for an extra couple of days.

JeBeDIA was also out there early with a bonus participant, his boss and IMOP home game participant FunBobby. They had to meet a client the day before and were going to meet up with us in time for the kick off. Can you spell "junket"?

Last but not least was another of our returning sophomores Baby Carlos. Baby Los would prove to be a part time participant this year as he both had non-Ironman friends along with him as well as being laid up by a nearly broken ankle (and broken sports betting run). Los gets checked into Monte Carlo and cabs it over to the V just as we are ready to leave. Nice timing! River Joe isn’t quite as lucky as his work commitments prevented him from making it to the limo departure and had to cab it down by his lonesome.

The Fremont Street excursion is Santa's way of giving the Ironmen some poker culture. The crew walks through the Nugget and over to Binion’s to scope out the WSOP Hall of Fame pictures (Hellooooo, Russ "Scumbag" Hamilton!), as well as to find a roulette table to set the pairings for the Third World Poker Tour (more to come on that later).

After predictably creating a long wait list at the cash games, a few degenerates decide to see the ballet at the strip bar on Fremont Street. They learned that the pictures/posters on the outside of the building and the person on the street recruiting are not at all indicative of the quality of the “talent” inside. After about 10 minutes and a near fight between a ballerina and an Ironman over how long a dance is supposed to last, they are out of there!

First session of the trip sees the usual start at the Nugget, namely, two or three tables with multiple Ironmen at each and extremely tilted people leaving roughly 15 minutes later. Table 1 sees FunBobby, Sahara, Grange, and JeBeDIA with a few locals. On a board with three aces, a woman bets and is called. She states, “If you have an ace, you’re good.” JeBeDIA can’t resist and says casually, “Really? An ace was good there?” and is met with a venom laced, “Oh, I’m the only girl at the table and everyone thinks they can F@#k with me???” JeBeDIA then quietly states, "Well, Grange won’t F@#k with you…” Speaking of Grange, he’s running well and says, “Now I can afford to be an idiot” to which JeBeDIA retorts, “I didn’t know there was a charge for that.”

At a nearby table, Santa and Mr. Chow are grinding away when a cute Canadian woman who appears to be a little clueless about betting and etiquette suddenly “shoves” into Mr. Chow’s set. Only problem is that she meant to only go all in for her chips and not the $100 bill she also had in front of her after winning the previous pot. After the dealer informs her that it all is now in, Mr. Chow calls and wins the pot. She has gone from happy woman to very sad woman in a few seconds. So being the nice guy that he is, Chow pulls $100 out of his pocket and gives it to her (only to find out later that she is loaded from the family business and was probably angle shooting him in the first place!).

The 2AM Golden Nugget tourney starts (great structure) and odd things start happening. First thing for the readers to understand is that this year’s “signature hand” is the deuce-four (aka “The Grump” after one of our favorite bloggers The Poker Grump). There are a many ways to win points in our IMOP contest, but one of the favorites is winning a hand holding the Grump. The catch is that it MUST be tabled to count for points, which is usually after a fairly large bluff, inducing raging tilt and subsequent wild loose-ness at the table. True to form, about 10 minutes into the proceedings, Santa makes an obscene over-shove against Sahara and one other player. They both groan and fold, and Santa proudly tables a Grump. However, this doesn’t work as well later when the whiskey takes over and he tries it again with only two tables remaining and gets called by kings and is crippled. Oops. Bad beat for the Grump!

Meanwhile, at another table early in the tournament, it only takes five hands for River Joe and Colt to get it all in with aces and kings against each other, and Colt is the first Ironman out. Bonnie soon shoves with kings and is called by Mr. Chow, and the river makes his J9 off good, giving Bonnie the first of many massive tilt-walks. Final table has Lucky, River Joe, Santa and Sahara—with Santa cashing and Sahara finishing runner up to guy we had labeled “The Dancing Queen” thanks to his celebratory gyrations when he would knock someone out. Was this thing televised? 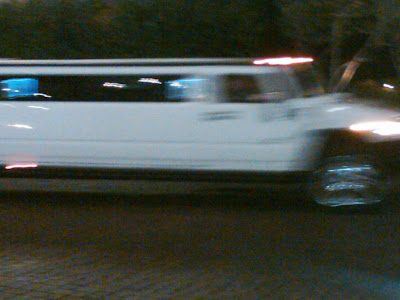 Bonnie's attempt to photograph our sweet ride that took us from
the Venetian, through the paradise near the Sahara, and into
the Shangri-La of the Fremont Street bizarre bazaar. 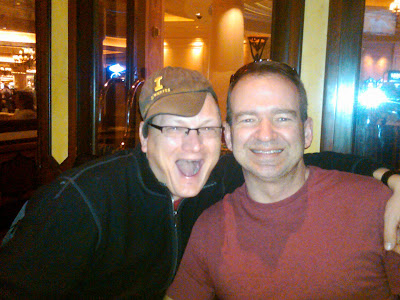 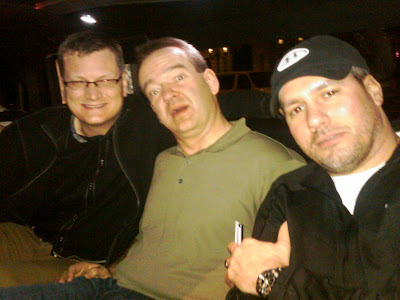 Mr. Chow, Barbie, and Fat Jesus doing who knows what
who knows where. (No kittens or Euros were harmed in
the staging of this photo.)
Coming soon—maybe—Part B: "Thursday".