Note: The official IMOP trip report will be posted in randomly intermittent installments. Prior entries are: Part I and Part 2, and Section 3(A). The author of the report is our cruise director, Santa Claus, with occasional editing by yours truly. Enjoy! 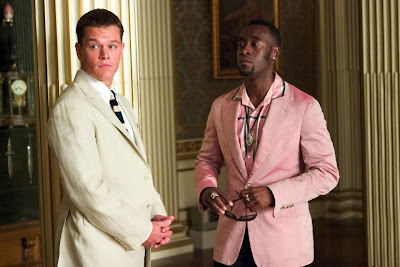 The IMOP Jacket Dinner has had great influence in Hollywood.

The highlight of the trip had arrived the annual—the Ugly Jacket Dinner. Grange and River Joe meet up for a pre-Ugly Jacket Dinner martini at Japonais in Mirage. They are standing at the crowded bar talking and River Joe gets tapped by a guy behind him who proceeds to rather brusquely ask if Joe would move, "because I'm trying to eat." In the very next sentence, the yahoo proceeds to say "Don’t get me wrong, I’m not that guy, I just don't like having someone so close"… fukkaw! Honestly, it might have been the smell of the jacket that offended him.

Samba was the venue for this year’s dinner, and we obnoxious our way into the place in full-on ugly regalia. We attract so much attention that we actually had a woman from another table ask us what we were doing, and then insist on being our judge for the worst three jackets. Despite strong entries from Barbie, River Joe (complete with light up glasses and electronic belt buckle) and Baby Los with his “Grandma’s Couch” entry, it is Sahara who pulls the longshot upset and walks away with the Ugly Jacket title. Rumor has it the judge felt sorry for him because he is so short, but this hasn’t been confirmed (actually overheard from the judge's table: "How about the short guy in the red jacket?"). 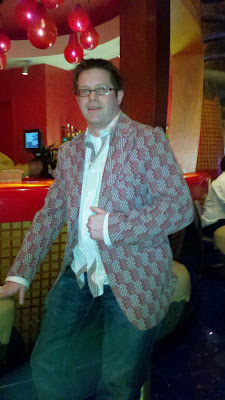 Sahara models his championship Ugly Jacket entry,
with the aid of a pitcher of caipirinhas.
During the course of our outstanding meal of meat on swords and a cornucopia of caipirinhas by the pitcher, Barbie decides he needs a smoke and gets up to have one and play some blackjack. Immediately the prop bets start flying about how much he will win/lose during one cigarette. Sahara, River Joe and Bonnie get their wagers down and Barbie blows away the +$150 line with a $475 win in just under four minutes! At the conclusion of the meal, we attempt to get a redux of the infamous “meat tank” prop from a couple years prior by getting Bonnie to put a gigantic ball of fat in his jacket to bring out to eat during an all-in at a poker table. Sadly, Bonnie was either too drunk or not drunk enough to try to ingest a tennis ball-sized blob of fat, so no hilarity ensued. 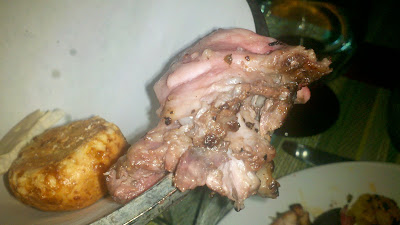 The "fat ball" prop bet went unclaimed.
The dinner also was the scene of the single largest wagering sweat of the trip. Thanks to a false sense of confidence in Bonnie’s hot basketball betting streak, everyone was heavy on Notre Dame to beat Louisville. We toasted each other when they were up 12 at one point (and getting points), only to start swearing at our phones as watched the lead dwindle to nothing. The Golden Domers eventually choke, costing the Ironmen somewhere in the neighborhood of $4,000 combined. As they watch it come to a painful end at the Mirage sports book with several hundred other angry losers, Santa laments, “I haven’t seen this many people pissed off at Catholics since the last Mel Gibson outburst.” Time for a change of venue and a mojo-jumpstart, and we begin the walk to PHo for loose action. Fukkaw!

On the way, we make a refreshment pit stop at Grange’s favorite mojito/caipirinha stand outside Caesars, and Grange springs for a round of drinks to ward off scurvy. Baby Carlos decides he is going to sacrifice his jacket to Caesar. He drops it off, but it must have angered fair Caesar, because he makes Los step off a curb into a pothole, where he damn near breaks his ankle. The pain is searing, so he detours to the room to ice it. By Saturday night, it is bruised from heel to toe. Vegas is emotionally, and now physically dominating Baby Los.

We arrive at PHo and get seated at various tables. After losing $225 in the first hand, JeBeDIA gets in a groove with Bonnie at his table and makes a nice comeback. After a day where Bonnie drank 20 Goose & Juices, he starts the night on a Corona binge and never stops rolling. At one point, two drunk clubbers that they nicknamed Garth Brooks (cowboy hat and clothes) and Spiderwoman (fake boobs and a spiderweb tatoo on her shoulder) sit down and promptly begin textbook collusion (showing each other their hands, betting and raising others off hands, then checking it down, etc.) The dealer inexplicably lets this happen, but fortunately they are so bad, even collusion couldn't help them. Bonny felts Garth in one hand and gets verbally berated by Spiderwoman which sets of a table argument—you're awesome, dude, when your girlfriend has to do your trash talking.

Barbie had been playing for a while and decides it’s time to hit the rest of the Strip with Mr. Chow and Lucky. On his way by Santa’s table, a guy pipes up that he wants to buy Barbie’s ugly jacket. A short negotiation occurs and the guy pays Barbie $30 for the thing. However, in true Caribbean flea market style pushiness, Barbie insists on making it $35 and throwing in the tie he’s wearing. Guy does not want the tie but by then Barbie has removed both items and handed them over, now expecting the $35. The guy sheepishly hands over the money and Barbie gets an extra $5 for a tie which was wastebasket bound anyway. 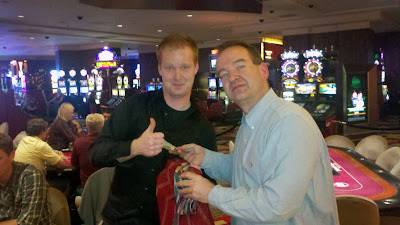 Barbie scams a tourist at Planet Hollywood.
The three Ironmen hit the strip and use Lucky as their canary in a coalmine to find “hot” carnival tables and go on a massive run over the next couple hours. Between yells of “Ca-Caw!” and “ship it, bitch!”, the group won over $3,000 and tipped Lucky $130 for finding the hot tables. They even got so degenerate they pushed their luck and played baccarat at Harrah’s, despite having no idea how to play. "Ca-Caw!" for the profit!

Back at PHo, the last combatants were racking up their profits and heading out. Both groups seemingly walked around the casino twice trying to find the escalator to the taxi stand. Once Bonnie arrived back at the Venetian, he avoided a drunken repeat of last year where he couldn’t get his hotel room door open. He did, however, manage to wake his roommates again by flipping on every light in the room and jabbering away incoherently about his $1400+ victory, causing Colt to tweet: “Drunk Bonnie arrives to room @ 5:30am, says many words”. 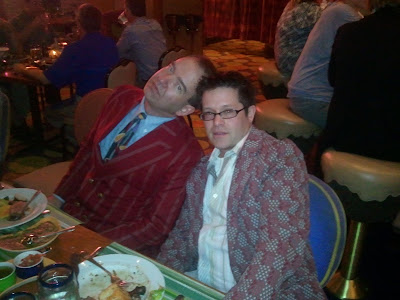 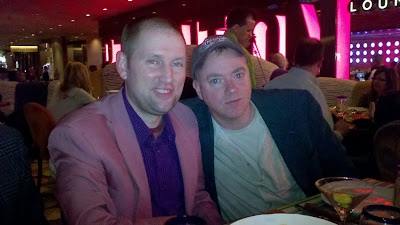 Grange (left) was shut out of the Ugly Jacket competition for
the first time ever, despite his classic pink Miami Vice brand jacket.
Colt (right) classed up his jacket with a baseball cap. 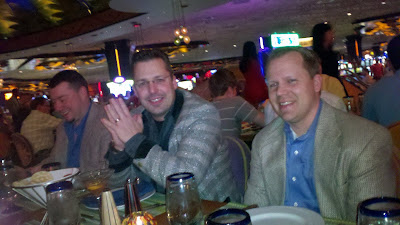