Some of you may know the "Real Dawn Summers" (Twitter Ramblings, Annoying Non-Poker Blog, Obnoxious Poker Blog).  I don't.  But somehow, despite never meeting this East Coast Nit Queen, I've made it on her short list of mortal enemies.  Sweet.

Now, rumor—and by "rumor" I mean "three months of shameless self-promotion"—has it that Mlle. Summers will be turning 29ish today (Thursday—this is scheduled to post at 12:01 am Eastern time so as not to be tardy).  So, in honor of her birthday, and in an effort to avoid her goon squad, let me be the first to wish her a Joyeux Anniversaire!

As far as a gift, since I can't get her what she needs most, I have several alternatives:

* A new quarterback for the Patriots: * A Butter Cow and a Butter Boyfriend:

* Or a new side table (courtesy of Catalog Living): 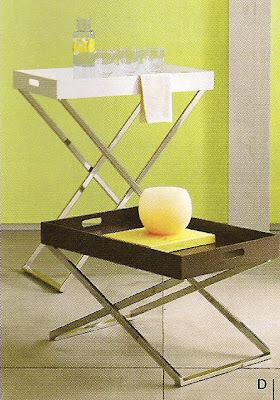 No one could ignore the obvious racism
of Elaine’s side table arrangement.
Nawww, this is a BIG DEAL birthday!  So, I'm going to pull out all the stops and give the ultimate gift.  On her next (first) trip to Iowa, I will treat Mlle. Summers to dinner at the famous Rube's Steak House.  Then we'll go cow-tipping, before rolling out to take money from farmers at the poker tables.  It will be the best birthday party ever!
In the meantime, here's her other gift.  Enjoy!
Posted by Grange95 at 7/07/2010 11:01:00 PM

Email ThisBlogThis!Share to TwitterShare to FacebookShare to Pinterest
Labels: Bizarre