Over the past couple of weeks, several states have overreacted to a spike in alcohol-related deaths among college students by rushing to ban a popular alcoholic energy drink—Four Loko.   Like many popular energy drinks, Four Loko contains caffeine, taurine, and guarana, with a 23 ounce can providing roughly the equivalent caffeine content as a tall Starbucks coffee.  Four Loko also contains alcohol equivalent to many malt liquor beverages, ranging from 6% to 12% ABV (12-24 proof).  By comparison, most wine is roughly 12%-15% ABV, while hard alcohol generally clocks in at 35%-45% ABV (70-90 proof).

Anyway, I didn't think much of the Four Loko loco-ness initially; after all, it's hardly news when a state or municipal government does something silly to "protect" its residents from the health crisis du jour.  But the Four Loko crisis achieved D-Bag O' the Day status when the federal government decided to get involved:

Last November the Food and Drug Administration warned 27 companies that they probably were breaking the law by selling beverages that contain alcohol and caffeine, since this combination has never been officially approved.  Today, after a year of review, the FDA is expected to announce that it was right; caffeinated alcoholic beverages are illegal.  Rather than seize all existing stocks of Four Loko, Joose, etc., the FDA probably will send more letters, warning the manufacturers that they are producing "adulterated" beverages.

Let me get this straight—putting caffeine in an alcoholic beverage creates an "adulterated" beverage?!?  Excuse me, but we aren't talking strychnine, or cocaine, or opium here.  We're talking about caffeine, quite possibly the world's most commonly used "drug".  In a typical day at the office, I probably drink 3-5 cups of coffee, and down an additional 3-5 cans of diet cola.  At the poker table, I routinely drink a diet cola, cup of coffee, or cup of green tea every half hour, for stretches of up to 15 hours at a time.  I suspect there are tens of millions of American adults who consume substantial amounts of caffeine on a regular basis.

So is it the combination of alcohol and caffeine that poses a health risk?  Some of the people interviewed for stories about Four Loko seem to think that combining the intoxicating effect of alcohol with the stimulant effect of caffeine somehow creates a dangerous situation by making drunk folks more alert.  Has the FDA ever heard of, oh, maybe ... Rum and coke?  Whiskey and coke?  Irish coffee?  Or how about the premier cocktail of the young and trendy for nearly a decade—Vodka Red Bull?  Hmm, that seems an awful lot like an alcoholic energy drink.  Frankly, the alcoholic content of some Vodka Red Bulls likely exceeds the alcoholic level of Four Loko; it can be hard to know the alcoholic content if one doesn't see the drink being mixed.

College kids have been mainlining Vodka Red Bulls at clubs, at parties, in bars, and at the poker tables for years now; on my Vegas poker trips the past few years, I would have to say that Vodka Red Bull is the most common mixed drink ordered at the poker tables (followed closely by classic caffeinated booze cocktails like Jack & Coke and Captain & Coke).  Although I personally hate the taste of Red Bull, many of my friends drink Vodka Red Bulls, including several of the Ironmen while at the poker tables.  I can't see any health hazard from their choice of beverage, though it certainly doesn't help their meager poker skills.  It's no coincidence that Vodka Red Bull has earned the nickname "The Devil" (or "The Debil" several drinks in to a session) among the Ironmen.

Alcohol-related deaths are always tragic, because they are preventable.  Alcohol-related deaths among college-age (or younger) folks are especially tragic, given that they usually arise from binge-drinking (often with some sort of peer pressure involved).  But these deaths are not the result of an energy drink problem nor a caffeinated alcohol problem; they are the result of an alcohol abuse problem.  Kids can easily mix up an alcohol-energy drink cocktail if they want.  Banning premixed versions of such beverages won't solve a binge-drinking problem, and may in fact make the problem worse if kids wind up mixing their own super-strong versions of Vodka Red Bull (or their personal alcohol-energy drink cocktail of choice).  Back in my college days, beer kegs were banned from campus parties.  So, we turned to hard liquor, and got hammered on kamikazes, lemon drop shots, cheap tequila, bad vodka, Captain & Coke, Jack & Coke, and of course, Jägermeister.  I have no doubt the keg beer was actually safer for students.  I suspect a similar phenomenon will occur with today's kids.  The FDA's ban on caffeinated alcoholic beverages won't stop kids from binge-drinking and occasionally dying.  All the ban will do is change the kind of alcohol they consume while binge-drinking.

To be blunt, this FDA ban of alcoholic energy drinks is worse than pointless.  The ban is a superficial bandage that makes the public think their government has acted decisively to fix an alcohol-related death problem, when in fact the real issue—our country's culture of youth binge-drinking—continues to fester untreated.  It's shameful that the FDA, with its expertise in drug safety, is pandering to the public hysteria over these alcoholic energy drinks without any scientific evidence that the drinks are any more dangerous than caffeinated or alcoholic beverages in general, or pose any health risk not found with cocktails which use a caffeinated mixer.  The FDA's pious posturing on this issue is nothing more than a public relations charade.  It's enough to drive one to drink. 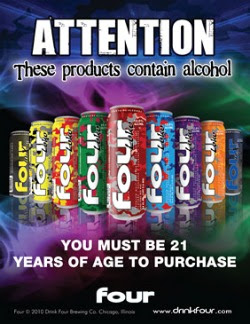