Over the holiday weekend, I played a session of 1/3 NLHE at the Horseshoe in Council Bluffs. I happened to be seated at a brand new table that opened as players busted out of the Sunday noon tournament.  The player seated to my immediate right was a young guy wearing the de rigueur baseball cap and hoodie, as well as a sullen frown; let's call him "Young Einstein".  Within minutes of the game starting, another young hoodie-wearing kid stopped by to inquire how Young Einstein busted out of the tournament, which led to this diatribe:

Yes, yes, I can see how someone calling with a better hand is a terrible play.  Wow, she was horrible to commit her stack with the best hand.  If it weren't for donkeys getting lucky like that, the good players would win 'em all.  It sucks that geniuses like Young Einstein have players like that lady keeping him down.

Young Einstein asked, "Jacks?  Tens?"  I smiled and said, "No, I got a monster" and rolled over my hand.  Young Einstein jerked back, then started muttering darkly about the usual, "How can you play that trash?" and "Twice in one [expletive] day."  Apparently, he failed to appreciate the irony of the situation.  Within a few hands, he had pushed preflop with a suited Ace-rag and busted out, whining all the way out of the poker room.

Our surly Young Einstein immediately reminded me of the faux-bounty given to me by Drizz after my WPBT fiasco—a bottle of Surly "Darkness" Russian Imperial Stout. 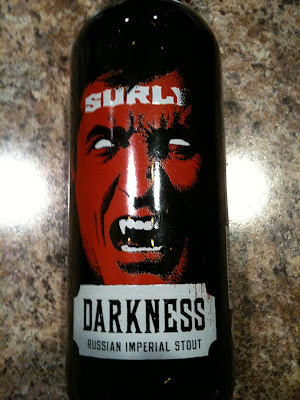 Surly Darkness is an exceptional example of the Russian Imperial Stout style of beer, with a very dark (almost black) color, strong molasses and espresso aroma, creamy head, and high alcohol content.  The flavors are dark chocolate, caramel, coffee, and sweet dark fruits—mainly raisins and figs, with a hint of blackberries and plums—with a definite bite of spice on the finish.  The hops are noticeable in the background, but they don't interfere with the smooth, easy drinking character of the beer.  Surly Darkness is an amazingly tasty, refreshing beer for those of you who aren't afraid of the dark.
Posted by Grange95 at 12/29/2010 08:56:00 PM

Email ThisBlogThis!Share to TwitterShare to FacebookShare to Pinterest
Labels: Horseshoe, Wine and Whine