Heresy extends the hospitalities of the brain to a new thought.

Heresy is a cradle; orthodoxy, a coffin.”


I happen to enjoy quaffing the occasional refreshing, medicinal beverage known as the Moscow Mule. In fact, I'm something of a Mule evangelist, spreading the good news of the Mule from South Carolina to Denver, and from Vegas to Canada. But I am also a Mule traditionalist, hewing strictly to the time-honored Mule recipe: good vodka, ginger beer, fresh-squeezed lime juice, and ice cubes, served in a copper mug. No mint, no bottled lime juice, no sugar or simple syrup, no crushed ice, no garnish other than a lime wedge, no highball glass. An orthodox Mule, if you will. 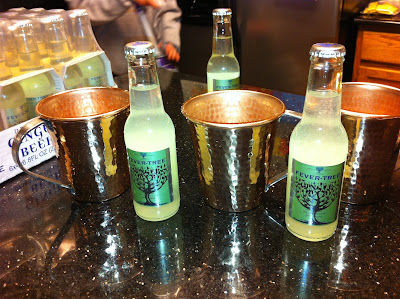 Part of my Christmas gift to my brother and sister-in-law,
so they can fight scurvy in Denver. Using cubed ice, of course.


Unfortunately, the more I evangelize for the cult of the Mule, the more Mule heresies I encounter. Some are minor, like flavored vodkas offered in a number of Des Moines establishments. Many of these "Mule Ranchers"—sort of a cross between a Mule and a Jolly Rancher—are actually quite tasty, particularly those that stick to fruit flavors which complement the ginger flavor of the Mule—pear, black cherry, apple, and peach seem to work well. Other heresies are more fundamental. "Drug Mules" swap out the vodka for silver tequila, while "Kentucky Mules" get their kick from good bourbon. Perhaps the most esoteric Mule heresy I've encountered was a "Tokyo Mule", based on dry saké and yuzu juice. All were highly unorthodox, yet all were very refreshing.

Maybe "heresy" is too strong a word for these mutant Mules. In a way, these Mule variants are more like a cover song or tribute album, putting a new spin on an old classic. Sometimes, the cover song introduces the listener to the original performer, like Metallica did for me with their cover of Diamond Head's "Am I Evil?". Sometimes, the cover version puts a whole new spin on the classic, rendering the original song accessible to a new generation (e.g., the Moulin Rouge remake of LaBelle's "Lady Marmalade" by Missy Elliott, Christina Aguilera, P!nk, Mya, and Lil' Kim) or a different audience (e.g., Travis Tritt's excellent countrified cover of the Eagles' classic "Take It Easy", or in the other direction, Carrie Underwood's great pop cover of the already amazing Martina McBride country classic "Independence Day"). For some songs, numerous wildly divergent renditions of the same song may be equally inspiring; witness the variety of approaches to Leonard Cohen's classic "Hallelujah" taken by artists like Jeff Buckley, John Cale, Rufus Wainwright, and k.d. lang (my personal favorite). In rare cases, a cover version may actually elevate a good song to something transcendent—Johnny Cash covering the Nine Inch Nails' hit "Hurt", or Whitney Houston's iconic rendition of the Dolly Parton hit "I Will Always Love You" (Entertainment Weekly recently published an intriguing behind-the-scenes story about how Houston came to perform the song for The Bodyguard).

Of course, not every cover song is an artistic success. In fact, most cover songs probably hover somewhere between William Hung's American Idol rendition of "She Bangs" and Billy Joe Jim Bob and Ellie Mae belting out a tequila-aided "Friends In Low Places" duet during karaoke night at Finnegan's Corner Tap. When it comes to Mules, often the heretical variations from the Platonic Mule more closely resemble "playing Kenny G on a kazoo" than "Kenny G covering Charlie Parker" (an abomination in its own right).

The most common unforgivable Mule sins are adding sugar or simple syrup to the mix, or garnishing with mint. Look, mojitos have earned their place in the scurvy-fighting refreshment pharmacopoeia. But sugar and spice do not make everything else nice, at least not in my copper mug. Speaking of which, a Mule served in anything other than a copper mug may well be refreshing, but it's like serving a fine red wine in jelly glasses—it will do in a pinch, but the ambience is lost (you'll have to trust me on this).

Which brings us to the ultimate Mule heresy—crushed ice. When sharing the Mule recipe with Otis, I felt confident I had conveyed the central importance of cubed ice. In fact, I said, "Ice cubes—must be 2 cm per side, made from water drawn during a new moon from the Ogallala aquifer (PRO TIP: Any ice from the closest freezer will work fine)." That's right: "Ice cubes". Good lord, could it be any clearer?!? 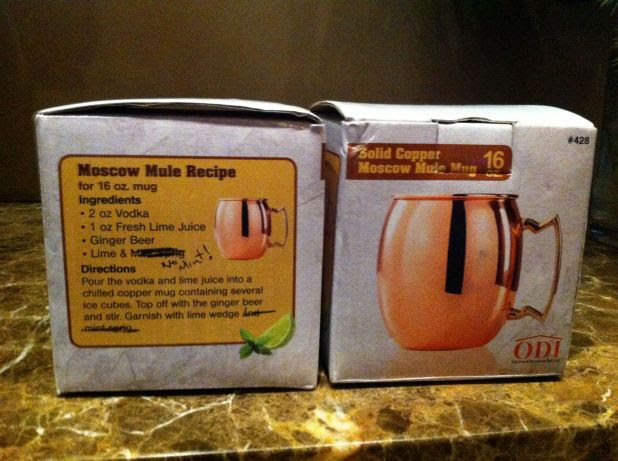 My WPBT bounty could not have been clearer:
Ice CUBES and NO MINT!

Nonetheless, Otis fancied himself the equal of Daniel Webster and proceeded to orate for his Mule soul, throwing down the gauntlet and claiming a mixology loophole rendered crushed ice superior to ice cubes. As Exhibit A in his impassioned defense, Otis demanded a jury viewing—and tasting—of the crushed ice Mule at Herbs & Rye in Las Vegas. Otis described the Herbs & Rye experience as pure rapture:

Thor went to work in a way I had never seen. It was at once robotic and fluid, like a wax museum bartender animated into a performance artist. By the time Thor finished, I had in front of me what amounted to a Moscow Mule sno-cone made with Fever Tree Ginger Beer and garnished with a paper-thin piece of lime peel.

Nonetheless, I am nothing if not a fair man. I determined that Otis and his crushed ice theorem should be given a fair trial, then shot like Old Yeller. So, during WPBT, I prevailed upon Lori to take me to Herbs & Rye, accompanied by a security force / jury of Astin and Travis. The scene was much as described by Otis, except for the two young, hipster Asian DJs spinning "Best of the 80s/90s Hip Hop Videos" in the lounge while we dined. Now that was an awesome trip down musical memory lanes!

The waitress brought drink menus, but there was no reason to open them. Three Mules were ordered. Three crushed ice Mule sno-cones arrived. I was duly skeptical. I sipped. The drink was tasty. It was ... very refreshing.

A second round of Mules were ordered by Lori and me, while Astin switched to a "Blood and Sand", a drink requiring an elaborate tableside orange bonfire. Apparently our order required more ice to be crushed, leading to our observing a 250+ pound man beating a block of ice into pulp with a massive mallet. Let's just say, if you own a massive mallet, you can crush all the ice you want for your bar and you will not hear a word of protest from me. 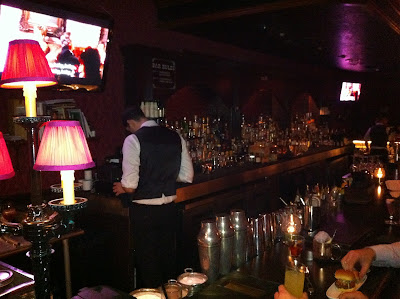 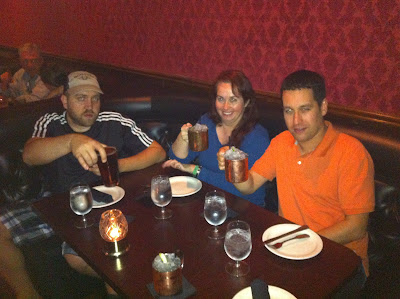 Travis, Lori, and Astin, with a round of refreshments at Herbs & Rye. 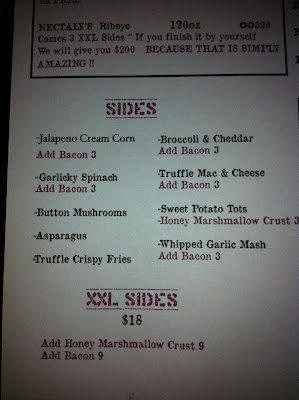 All side dishes are better with bacon. 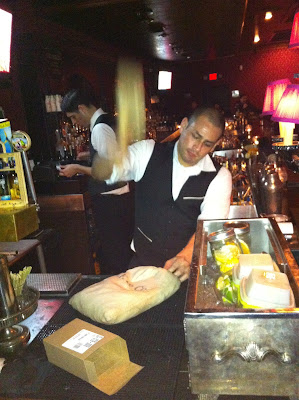 How to make artisan crushed ice. 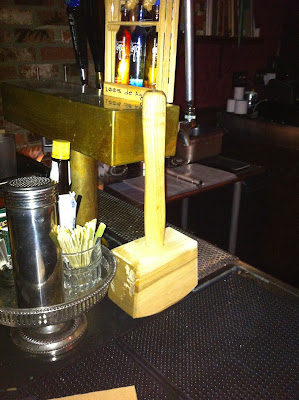 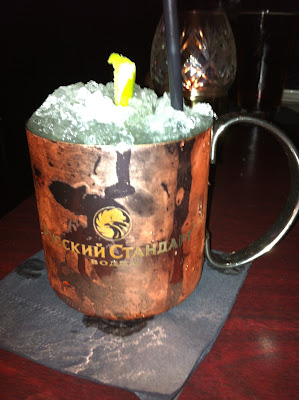 I left Herbs & Rye very refreshed. Sure, much like Jabez Stone, I "got tricked and trapped and bamboozled, but it was a great journey." Still, although Herbs & Rye was a compelling opening gambit, the jury was still very much out on the crushed ice Mule.

Fast forward to late December when I stopped off in Vegas for a few days on the tail end of my holiday travels. During my stay, I sampled Mules in several spots. Nobhill Tavern in the MGM Grand served a decent Mule made with Smirnoff and Gosling's ginger beer, but it was served in a highball glass with crushed ice. It was good, but not great. Later, I had a Mule at Todd English's P.U.B. in Aria. This was the second time I dined at P.U.B., and the second time I was sorely disappointed by mediocre food. This time, I was also disappointed by a Mule served in a lowball glass with crushed ice and what seemed to be merely a splash of ginger beer. P.U.B. certainly took the mediocre Mule to an entirely new level.

But the greatest disappointment was saved for last. After a tasty dinner at Rick Mooney's RM Seafood at Mandalay Bay with Lori, Scott, Julie, and Poker Grump, we adjourned to Red Square to sample their Moscow Mules. When they were served, the Mules were not only sno-cones on steroids, but garnished with mint and served in pseudo-copper mugs (copper exteriors lined with non-copperish interiors). Mint sprigs were duly discarded, and Mules were sipped. Thankfully the straws enabled us to reach the beverage, but the mugs were barely 2/3 full at best. And thus were the two fundamental flaws of the crushed ice Mule laid bare—crushed ice waters down the drink while concomitantly squeezing out space for the beverage itself. Presto! Diluted Mule, and not much of it. Even the use of the uber-ginger beer Fever Tree could not save these Mules from mediocrity, and a second round was actually less satisfying (or more dissatisfying) than the first. The Mules even saved a final kick for when the waitress presented the tab—$17 per Mule. Sacrilege! 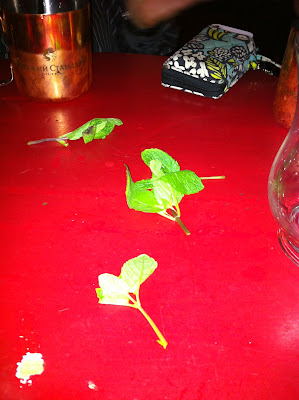 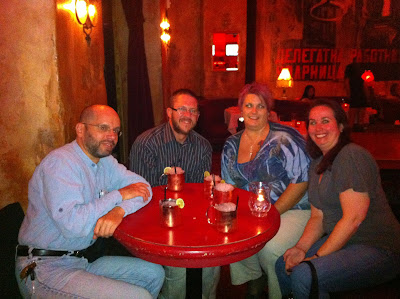 Frankly, I have seen enough. Mene Mule Tekel u-Pharsin. The Crushed Ice Mule has been judged and found wanting. No more will I permit crushed ice to pollute the sacred Mule. No more will I tolerate watered-down Mules that require a bendy straw to sip. By grand edict of the High Priest of the Mules: Give me cubes or give me death!

Or a Templeton Rye. On the rocks.

“I myself have read the writings and teachings of the heretics, polluting my soul for a while with their abominable notions, though deriving this benefit: I was able to refute them for myself and loathe them even more.”

k.d. lang performs "Hallelujah" at the 2005 Juno Awards in Winnipeg.
(Yes, she's Canadian. Deal with it.)


Whitney Houston's ultimate rendition of "I Will Always Love You".