"You will be assimilated."

—The Borg, "Star Trek: The Next Generation"

Friday night I played a short session at The Meadows ATM.  It was one of those sessions where you feel like you never do anything right.  My first hand, I have Presto and turn a 5 for a nice pot before my chips even reach the table.  But then, my stack got flushed.  Literally.  I ran top two pair, two straights, and a baby flush into flushes, which is not a particularly profitable approach to the game.  Thankfully, my Spidey sense kept my losses somewhat limited.  The pickle on the sh*t sandwich that was my session was when I flopped an OESD with 64s on a board of 5-3-3.  I bet the flop and got a call from an uber-tight player.  Turn is a 7.  Donkey Kong!  I bet, he calls.  River is a blank, so I push my last $100 into the $400 pot.  He reluctantly calls with ... 73s, and says, "I was worried you had pocket 5s again."  I wish.

I headed home to watch some Olympics with the puppy in bed.  I fell asleep around 3:00 am, and I woke up around 5:00 am and heard Berkeley on the floor, chewing something.  Turns out it was several somethings:  a toothbrush, a razor, and ... my BlackBerry.  All were in pretty sad condition: 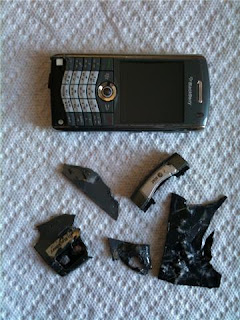 Puppy Chew Toy
As an amusing touch, I checked the still-functioning BlackBerry later in the day, and discovered Berkeley had somehow managed to call one of my friends at 3:38 a.m. and leave a six minute voicemail message, presumably of him chewing and slobbering, but who knows, maybe he barked something insightful.  I suspect my buddy was passed out and never heard the phone, or more amusingly, was perhaps drunk and thought he was getting a steamy booty call.

So yesterday I had to venture out in search of a new phone.  Since I have AT&T coverage (the sig other has an iPhone), my options were somewhat limited.  After some online research, I narrowed my choices down to a couple of BlackBerrys.  But the A&T store at the mall across the street only had one of the models I was interested in, and no staff interested in helping me.  So, I headed up the street to Best Buy.  Turns out they were running a special deal for their Rewards Zone members, where a 16GB iPhone 3GS was going for only $99.  So, I went with the iPhone.  It took about 30 minutes for the staff to set me up.  I left and went to make a call in my car when I discovered the phone was not in the box!  Hmmm, awkward.  I was heading back into the store when I ran into the salesperson who had assisted me, running out to the parking lot with my phone.

Anyway, I've been hearing iPhone users rave about their phones for several years now, and it always seemed a little over the top, like those too cheerful cult members passing out propaganda on the street corner.  Well, in less than 24 hours, I've joined the iPhone cult.  The dang thing is just ... slick.  The touchscreen is huge compared to the BlackBerry.  The interface is incredibly intuitive; no guessing where settings are located as with the BlackBerry.  Applications (pardon me, "apps") are easy to find, quick to download, and a snap to install.  I've added four apps so far, and none of them took longer than 2-3 minutes total to find and install.

Among the apps I've installed are a free Blogger app (BlogPressLite) that will let me update my blog on the go. I also added a free Google app that will let me access my documents and other Google programs quickly.  But, my new favorite app is TweetDeck, which is a huge improvement over the Twitter app I was using on my BlackBerry.  TweetDeck took less than a minute to install, as opposed to the BlackBerry where installing a Twitter app required me to find it on the internet, download it, then endure a complicated set up procedure.  TweetDeck is also a great app since it allows me to set up different "columns" or groups/categories of people to follow.  This enables me to follow the Ironmen separately, for example.  Just from browsing the app store, I fully expect I will downloading apps for days, like a puppy looking for treats.  Just so my iPhone doesn't become a puppy treat ...

For those of you losers out there who don't have iPhones, go get one!  Now!