Last March, while in Vegas for our annual Ironman of Poker competition, I was playing at Bellagio early one morning. In keeping with the spirit of our IMOP group, I was wearing a t-shirt with paint splotches on it which read, "I Just Killed a Clown". I was also keeping up my drunk goofball image by making plenty of stupid jokes, keeping the table entertained, except for one intense middle-aged guy who was taking bad beat after cooler to gack off over $1,500. Knowing he was on tilt, I called his overly large preflop raise with 5-3 suited. Long story short, I flop the open-ended straight draw, and the turn Ace gave me the wheel—and gave intense dude a set. My hand holds up, and intense dude stands up, flings his Aces into the center of the table, looks at me and blurts out:

This gent's angry outburst pairs well with a bold red wine, like the Crios de Susana Balbo Malbec 2007. The Crios Malbec is a beautiful dark red, with a ton of black cherry and raspberry fruit, and a hint of spice. This malbec is a little lighter in color and flavor profile than many of the inky purple monsters common from Argentina, so it pairs better with milder foods, like pork chops, burgers, pizza, and pastas. The Crios Malbec also is not as heavy as many malbecs, making it an easy-drinking sipping wine. The Crios Malbec is part of a line of value wines by Susana Balbo, one of Argentina's premier winewakers who also has a pricier line of specially crafted wines released under her personal label. The "Crios" line is a great value, usually around $10-$15/bottle retail, and also includes a rose’ of malbec, a torrontes (full-bodied Argentine white), a bonarda (soft Argentine red), and a cabernet sauvignon. 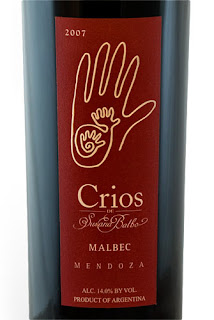 Email ThisBlogThis!Share to TwitterShare to FacebookShare to Pinterest
Labels: Wine and Whine