Last week, I was in Vegas for Spring Break; well, I was in Vegas because the spousal unit was on Spring Break (he’s a teacher), and he and a couple of his friends decided to do Vegas this year. I could get them a room at Aria for $109/night, but I had to be present at check-in. So, my role was limited strictly to checking in and paying for the room. Otherwise, I was on my own to play poker while the crew (“Jack”, “Karen”, and “Will”) roamed the Strip in search of adult beverages and childish pranks.

Friday was our last night in Vegas, and I had been running poorly at Aria. Jack suggested I play at Treasure Island (excuse me, "TI"), since I usually have run well there. Although I rarely listen to Jack’s thoughts on poker, I was already at Mirage (we had all met for dinner at BLT) and TI is one of my favorite small rooms, so I trammed it over to TI. Well, I wanted to tram it, but a family decided to take group photos on the sidewalk out front of Mirage as the tram was loading, blocking me from the tram just long enough I could have risked severed limbs by attempting to squeeze on board. People blocking sidewalks or aisles to take photos may need to go on the taserlist; it’s under consideration. Anyway, too lazy to wait for a tram, I hoofed it down the Strip to TI (and frankly, I needed the exercise).

I must have arrived a little after 9:00 pm, as the 7:00 pm tourney was winding down to the final table, and the 10:00 pm tourney was starting to get some entrants. There was only one 1/3 NLHE table going, but there was a lot of money in play, so I waited 15-20 minutes until a seat opened up. Unfortunately, this table was not a typical TI fish fry. The two gents to my immediate right were very tight-aggressive, and clearly rather formidable opponents (I later learned they were AVPer SoCalMike and his friend John). There were a couple of tight-passive tourist types, and a couple more maniac-style regulars at the opposite end of the table. Early on I stacked off to SoCalMike with A8s, when he flopped a set of 9s, I turned Aces up, and the river 8 filled us both up, letting me drive my dinghy into his destroyer. But I recovered quickly, doubling up a buy-in through John when my AsKs turned a flush to crack John’s AA. I also won a couple of decent pots from one of the LAG regulars with good reads, and a refusal to be bullied (well, he considered me a calling station—tomAEto, tomAHto—I got the cash).

About an hour and a half into my session, there were enough tourney bustouts to start a new 1/3 NLHE table. Surveying the table, it was more to my liking, with several obvious drunks, tourists, and generally weaker looking players. It’s kind of a strange skill, but recently I’ve found my ability to sniff out weaker opponents is getting much better. Probably the result of years of playing experience letting my subconscious pick up on little tells in how players handle themselves, plus noticing how drunk they are. Anyway, I requested a table change, but was told the new game was a must-move game for at least one hour. Strangely, though, they let our game drop to 6-handed without moving any players over.

Eventually, after opening another new 1/3 NLHE table, the manager asked me if I wanted the table change. I gladly took it, since there is no reason in Vegas to sit in a tough game, no matter how well you are playing. Boy am I glad I moved! One table drunk was insistent on trying to bully everyone. I picked up a few timely hands and picked off several bad bluffs for at least $600 in profit. I also won several pots with well-timed bluffs of my own, mostly from betting the turn after everyone checked the flop. Basic play, I know, but at a passive table, no need to get fancy.

The other big pot I won illustrates an interesting betting pattern tell that can be exploited in certain players—the flop overbet. Most typical flop bets are 1/2 to 3/4 of the pot, particularly when the pot was raised preflop. Certain players will overbet the flop when they have a good hand, but the flop worries them. Often this means they have a pocket pair, but are worried by an overcard on the board, or a flush draw. In this hand, a decent young player (DYP) raised preflop in early position to $15, standard for the table. DYP’s raise most likely meant a pocket pair AA-88, or a big Ace; he didn’t seem the type to raise in early position with more speculative holdings. I called in late position with AhTh, as did one of the blinds. Flop was Ac8c4h. DYP led out for $50, which was just over a full pot-size bet. I read this as either: a) being a big pocket pair KK-JJ trying to represent the Ace and find out if either of us had an Ace, too, or b) a big Ace scared of the flush draw. Although I’m almost certainly outkicked if DYP has the Ace, I’m not yet convinced he does, and I may be able to represent the flush and bluff if a club hits, or even hit Aces up by catching my kicker. Plus, he had nearly $300 behind at the start of the hand, so this was potentially a big pot. So, I elected to call and reevaluate on the turn.

The turn comes another small club. DYP looks at his cards, then checks. I decide to represent the flush and bet $50. DYP thinks, then pushes all-in for ~$230 total. This puts me in a tough spot. If my read has been correct to this point, DYP might have the following hands that beat me: a) a set, most likely Aces or 8s; b) a big Ace; or c) a flush. Sets and big Aces are possible, but most cautious players probably don’t check-push the turn, particularly after I’ve represented a flush; the more common line for sets is to check-call the turn, and hope to pair the board, while a big Ace is more likely to check-call twice. A flush is possible, but with the Ac on board and DYP’s preflop raise, a flush becomes much less likely (though he could have KcQc). A hand that makes sense is a big pocket pair with a club, something like KcKx, or a big Ace with the Kc kicker, which are I-might-be-good-but-I-have-outs-if-I-need-them sorts of hands, which are nice hands for applying pressure when you aren’t sure if your opponent has a hand or is making a move.

So, I’m dead if he has a set or made flush, and drawing thin if he has AxKc/AxQc. I’m ahead of a hand like KcKx/QcQx. This is where the flop overbet comes into play. Hands like a set, nut flush draw, or top pair good kicker generally don’t overbet the flop, as they want action from weaker hands. The flop overbet is an overly aggressive move for true big hands. Instead, it is usually a sign of a weaker hand trying to look strong, like the animal defense mechanism of trying to look bigger and meaner to scare off potential predators. Now sometimes this defense mechanism is also used by a truly dangerous animal, like a cobra, or a savvy poker player mixing up his play. But for most recreational players, the overbet is a fairly reliable tell of a scared hand. Given this tell, along with the rest of the play (no tell is useful in isolation), I decided DYP most likely had KcKx/QcQx, possibly AxKc/AxQc, and I was doing fairly well against that range. I called, the river was a blank, and DYP just stared at me. I said, “All I have is the Ace.” DYP nods, and mucks. I said, “Kings with a club redraw, huh?” DYP jerks back a bit, stares at me, then nods. That hand goes into the books as Kings cracked, with an asterisk.

I finished my session moving to another table which included four friends from Orange County on a poker/drinking/sports betting weekend. Strangely, one of the guys was married to a lady from McCook, Nebraska, which was the nearest “big” town to my home town in rural southwest Nebraska. So, I fly a couple thousand miles to Vegas, only to play poker with a guy who’s been through my little hometown of 200 people. Truly a weird “only in Vegas” moment. Anyway, these guys were yucking it up, playing crazy, tilting some “serious” players, and having a blast; they would fit right in with the Ironmen. At one point, they were calling the clock on each other so much, they were banned from calling for the floor (presumably they could have called the floor for a rule issue). So, they started calling for “Grandma” when they wanted a floor. I ended up making some good money from the table, but I also had a great time.

All told, this TI session was easily my most profitable session of my trip (the always enjoyable four-rack cashout), and my most entertaining. There are several reasons I don’t play as much at TI as previously (mostly related to the ownership change), but I still enjoy the room’s dealers and managers, and the room is still a fun and profitable spot on the Strip. Oh, and where else will you find this nice lady playing at 3:00 am? 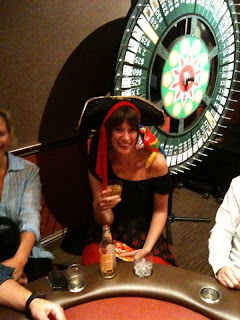