During my Festivus '09 trip to Vegas, I found myself in a wild late night 1/2 NLHE game at Bally's.  Shocking, I know.  Although Bally's often features loose-drunk action after midnight, this was a special occasion.  Driving the action at our table was a well-lubricated gambler with a seemingly endless bankroll—a drunken whale, if you will.  This gent would call any preflop raise under $200 with almost any two cards, and if the pot was unraised when it reached him, he would grab a random stack of red chips and blind raise $30-$80.  On the flop, he would go all-in with any pair or any draw.  Needless to say, this gent saw some monstrous variance, running up his stack to more than $1,000, then busting out and peeling another $300 from a fat wad of bills.  He took this all with a great deal humor, and a great number of beverages.

My strategy was to wait for solid starting hands (pairs 88 or better, or two Broadway cards), then see flops with the drunk gent.  I managed to take down a couple of nice pots, and was licking my chops for more.  Then, a mousey little 50-ish guy in a tweed sportcoat and precious little half-glasses (looked like Hollywood's idea of an English professor) decided it was time to tap the glass.  While drunk guy stepped away for a smoke, the professor began whining about the large preflop raises: "It's just not poker!"  I quietly said, "If this guy is going to play like this, until he's broke or passes out, he is the funniest and nicest guy you've ever met, and he can play his cards however he wants."  A couple of other players agreed, but the professor continued to stew (it probably didn't help that the professor had been sawed off a couple of times by the drunk's improbable suckouts).

Sure enough, when drunk guy came back to the table and pushed all-in against the professor's preflop raise, the professor showed Queens and mucked.  The professor then began to berate the drunk guy, whining about how he "wasn't playing right" and "was ruining the game".  Although I tried to lighten the mood, the damage was done.  Within a few hands, drunk guy stands up and leaves, saying, "Time to go play blackjack. At least I play that the right way."  So, drunk guy walks away from the game with at least $5,000 still in his pocket.  I still weep for all the missing Benjamins.

This tragic tale reminded me of a saké I once enjoyed during a dinner at the now-defunct Social House at Treasure Island (TI) (although the Social House website states it is reopening in the Crystals shopping center at City Center in three months).  Like wine, saké is a complicated beverage with a lot of styles and differences in quality.  I don't know much about saké except that a good, cold saké tastes great with a lot of Asian cuisine, and it apparently contains alcohol.  So, our group asked our server for a recommendation, and she suggested the Suigei "Drunken Whale" Tokubetsu Junmai.  "Suigei" refers to the brewery, while the words after the English name refer to the quality and style of the saké.  All I know is that the Drunken Whale had a crisp bite, reminiscent of a tart green apple, but dry, without any noticeable sweetness.  A little research after I got home revealed that the Drunken Whale is regarded as a "Champagne of Saké"; yet another hat tip to the fine Social House staff.  The saké went well with our meal, including sushi, Kobe beef sliders, and a couple of fish dishes.  At 15.5% alcohol, the Drunken Whale likely could get a whale a little tipsy.  If you like crisp, refreshing white wines like Champagne, Sauvignon Blanc, Pinot Grigio, Albariño, or Vinho Verde, a good saké like the Drunken Whale is well worth a try next time you serve light fish or vegetable dishes.  At around $20/bottle retail, this might be more of a special occasion beverage, but it would be a worthy option to consider in lieu of yet another bottle of overpriced, overoaked Chardonnay, especially come summer. 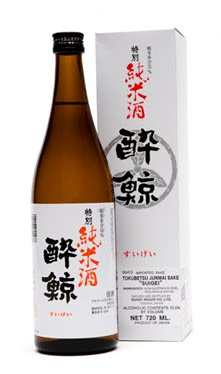