Sonny:  So, what country do you want to go to?
Sal:  Wyoming.
Sonny:  Sal, Wyoming's not a country.

So, it's barely noon, and after my morning, I think moving to Wyoming—well, maybe San Diego—is a swell idea.

As my Twitter followers know, the sig other and I are puppy-sitting this week and weekend for Fritz, a year-old German shorthaired pointer (a/k/a "German shorthair").  Fritz is probably five inches taller than Berkeley, but also 15 pounds lighter, and more full of energy, if that's possible.  Basically, Fritz is the lanky wide receiver, while Berk has turned into a monster linebacker (75 pounds—so much for being "on the small side for boxers").

As might be expected, the pups have been tearing around the house like maniacs, chasing each other, playing games with toys, and wrestling.  We have resorted to sleeping in separate rooms with one pup each so that they will actually sleep.  Of course, Berk still wakes me up three times a night to see if it is time to go find Fritz and play.  When they do get let out of the bedrooms, it's as if they haven't seen each other in years.

This morning started off rather innocuously.  We took the pups out to take care of their business around 6:15.  I watched them while catching up on my Twitter and Google Reader feeds, letting the sig other get ready for work.  He left around 7:00, and I went in to brush my teeth.  That's when the pups decided to launch their evil plot.

As I'm brushing my teeth, I hear rustling around, along with the ominous sound of no puppy playing.  This cannot be good.  I walk out to the kitchen, and find the pups with a bag of treats in the living room, trying to paw it open.  Guess opposable thumbs do come in handy.  Since the treats are kept in the laundry room, it appears the sig other forgot to close that door on his way out.  Berk knows better than to get into the treats, but Fritz is raised in a "no-treat" home, so he was literally a kid in a candy shop.  Since it was actually pretty funny, I scolded them just a bit for show, then went back to start shaving.

I barely have shaving cream on my face when I hear a huge crash!  I walk back out to the kitchen, where I find a plate shattered on the floor.  Wonderful.  Hmmm, apparently Fritz can reach the five foot countertops, and wanted the plate of crackers he saw me put there last night.  Poor Berkeley was cowering under the coffee table (his hiding place since his first day at home), knowing Fritz had broken another rule, and desperately trying to stay out of sight.  Fritz was clear across the room, wearing a hangdog guilty face.  This time, the scolding was not so friendly.  Pick up the plate, get out the vacuuum, back to finish shaving.

I decided I couldn't trust the boys unsupervised, so I put them out on our deck.  Now our deck has typical three foot railings, plus it is built out over an eight foot deep "moat" that runs along the side of our townhome complex (to allow daylight windows for the basement on that side), with a five foot gap between the deck and moat edge.  So there is no way anyone—or any puppy—can get onto or off the deck without jumping about five feet, after first climbing over the railing.  In other words, the deck is a perfect place to keep a couple of pups out of mischief for a few minutes.

Apparently our deck is not the doggie supermax facility I had assumed.  I get out of the shower, look out at the deck, and see Berk staring down the road ... at Fritz, who somehow jumped off the deck, over the moat, and out onto the lawn without hurting himself.  Wonderful.  Yup, Fritz was happily chasing birds right next to the street, and appeared ready to romp over to the park.

As much as I might want to murder the scamp, it wouldn't do to report Fritz being run down by a car.  So, in something of a panic, I throw on sweats, and pull on my sandals ... and one has been chewed into oblivion by a puppy who was bored by the other eight dozen toys strewn around the house.  Nice touch.  I decide to go for it Zola Budd-style and chase down Fritz, who gives me a big ol' grin as I drag him back in the house.  Brat.

I go back in the bedroom to put on my work clothes.  I hear the boys running around the kitchen, then Fritz suddenly dashes into the bedroom, followed closely by Berk.  They both stare at me, with suspicious guilty faces.  I say, "What are you boys up to now?"  Berk looks right at me and ... starts peeing on the floor.  Awesome.

Berk got a stern scolding as I drug both boys out for a potty break.  Berk went right in his kennel; he knew I was mad.  Fritz fought me like a dervish before I could get him in his kennel.  Where's an alligator wrestler when you need one?  Then, as I turned to walk back into the bedroom, my sock felt wet and warm.  Oh yeah, Fritz had left a big puddle of pee in the kitchen, with a trail of pee running the length of the kitchen to the front hall, where another puddle was on the doormat.  Exceptional.  So, I got to use about a billion paper towels to scrub our carpet and the entire kitchen before finally getting to leave for work.  How much fun can one guy have?

I head out of the house about 8:00, 30 minutes behind my planned schedule.  Oh well, no big deal, nothing on the calendar for work today.  I look down at my watch, it says 6:50.  Yup, dead battery.   *Sigh*  I turn onto the main road to the freeway, only to discover that I had not put in my contacts because of the hullaballoo with Fritz (I have a mild near-sightedness, so I don't need contacts around the house).  I turn back for home, get my contacts, head back out.  I pull back out onto the main road, only to see ... a cop car right behind me.  What a lovely pickle for the sh*t sandwich that was my morning.  Yeah, I might have pulled a bit of a rolling stop.  In my first break of the day, the cop did not pull me over.  Thank gawd for variance.

Perhaps today is not the best day to play poker. 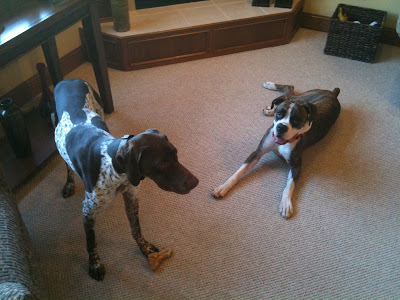