How Phil Galfond Got His Nickname
—A Poker "Just So Story"

Last night, the sig other (the infamous "Jack") and I enjoyed a fun evening with our good friends, Mr. & Mrs. Jugweed.  A combination of delicious brisket chili, a few Dark 'N Stormys, a little prosecco, and a Hawkeye victory over Joe PA St. made for a perfect start to the October portion of the college football season.  At one point in the evening, Jugweed and I started talking about the recent WSOP Main Event coverage on ESPN.  As the talk turned to the significant coverage of online poker wunderkind Phil Galfond, Jugweed pointed out, "You know, Jack gave Phil Galfond his nickname."

Now, for those readers who have never met Jack, let's just say he enjoys the party side of the Vegas experience.  Gambling doesn't much interest him, other than running an occasional $20 through a Wheel of Fortune slot while enjoying a smoke and a free drink.  No, Jack is one of those tourists who bought into the whole "What Happens In Vegas Stays In Vegas" marketing campaign—hanging at the pool during the day, wandering from bar to bar on the Strip at night, generally having a fun, booze-fueled vacation getaway.

On one of our early couples' trips to Vegas, Jack and the Jugweeds had spent the day sunning and boozing at the TI pool.  So after a late dinner (with drinks), and the Harrah's piano bar (with more drinks), I managed to pour Jack into bed shortly after midnight, then headed down to the TI poker room for a lucrative late night poker session.  Around 5:00 am, I called it a night and headed up to the room where I discovered ... no Jack.  This was vaguely alarming, in a "Is my poker bankroll big enough for bail?" sort of way.  After calling his cell phone several times, he finally answered:

With that helpful information established, I finally had Jack pass the phone to someone sober who told me he was at Bill's Gamblin' Hall O' Apostrophes'.  I walked up the Strip to retrieve Jack.  As we walked—or in Jack's case, stumbled—back to TI, a limousine pulls up along side us in front of the Venetian, leading Jack to declare:

Now, Jack has a long-running obsession with limos in Vegas.  Perhaps his favorite Vegas drunken game—other than pinching strangers and security guards who don't wear green on St. Paddy's Day—is to run up to tourists outside Strip casinos, point to a random person getting out of a limo, and scream in his best celebrity stalker voice:

There have been dozens of these faux-celeb sightings in Vegas, which never cease to amuse Jack, annoy me, and alarm the poor tourists sucked into the hilarity.  In any event, this brings us full circle to the "Just So Story" of "How Phil Galfond Got His Nickname".

Once upon a time, back in the good ol' days when online poker was a veritable Garden of Eden filled with juicy games, easy deposits, and great rakeback deals, a scruffy kid was playing in a WPT event at the Bellagio.  The Kid happened to wind up at the featured table with poker legends Phil Ivey, Phil Gordon, and Phil Hellmuth.  After winning a couple of pots each off Ivey, Gordon, and Hellmuth, the Kid started talking some smack:

The Kid:  "Looks like I'm the best Phil when it comes to tournament poker."
Ivey:  "Care to make it interesting?"
The Kid:  "Sure.  What you got in mind?"
Ivey:  "If any of you Phils bust me, I pay you a million dollars.  If I bust any of you, I get to pick the online poker nickname that you have to use for the rest of your life."
Hellmuth:  "I'm out.  Nobody would insure that bet."
Gordon:  "Why can't I get a table with a bunch of celebrity players?"
The Kid:  "You got a bet!"

Later that same orbit, the Kid raises in early position, and Ivey calls on the button.  The flop comes down Ad-4d-5d.  The Kid bets.  Ivey raises.  The Kid chatters a bit, does a little Hollywooding, then pushes all-in.  Ivey turns around to pay his massage girl for another hour, then calls.

The Kid proudly rolls over AcAs for top set.

Ivey quietly tables 6d-3d for the rather unsuspected flush.

The Kid stands up and screams, "One time!"

Phil Gordon looks puzzled:  "What the hell does that mean?"

Phil Hellmuth mutters, "He means it's the one time he's had a real hand all day.  Idiot."

The dealer peels off the turn card:  the case Ace, giving the Kid quads.

The Kid starts whooping it up, running around the rail, giving high fives to his friends.  "One meeellion dollars!  It's bottle service tonight, boys!"

Gordon breathlessly murmurs, "Wow! Wow!  Wow!  The Kid was only 32% to win on the flop.  Very unlucky card for Ivey."

The dealer puts out the river:  the deuce of diamonds.  A straight flush for Ivey!

The crowd erupts!  The Kid sinks to his knees, head in hands.  Suddenly, a tourist stumbling down the hall, wearing an Iowa t-shirt, and sipping an oversized Fat Tuesday Hurricane slushie points at the Kid and blurts out, "Oh my god!  It's Clay Aiken!  It's Clay Aiken!"

And that, dear children, is how Phil Galfond got his nickname. 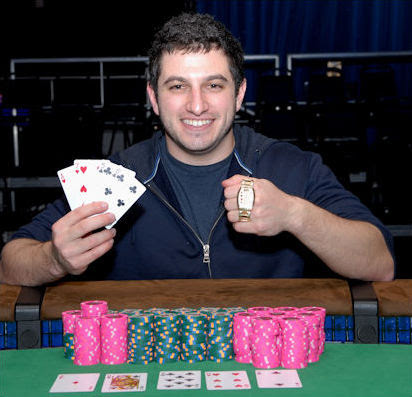 Phil Galfond with his 2008 WSOP bracelet for $5K PLO.
(image via Wikipedia). 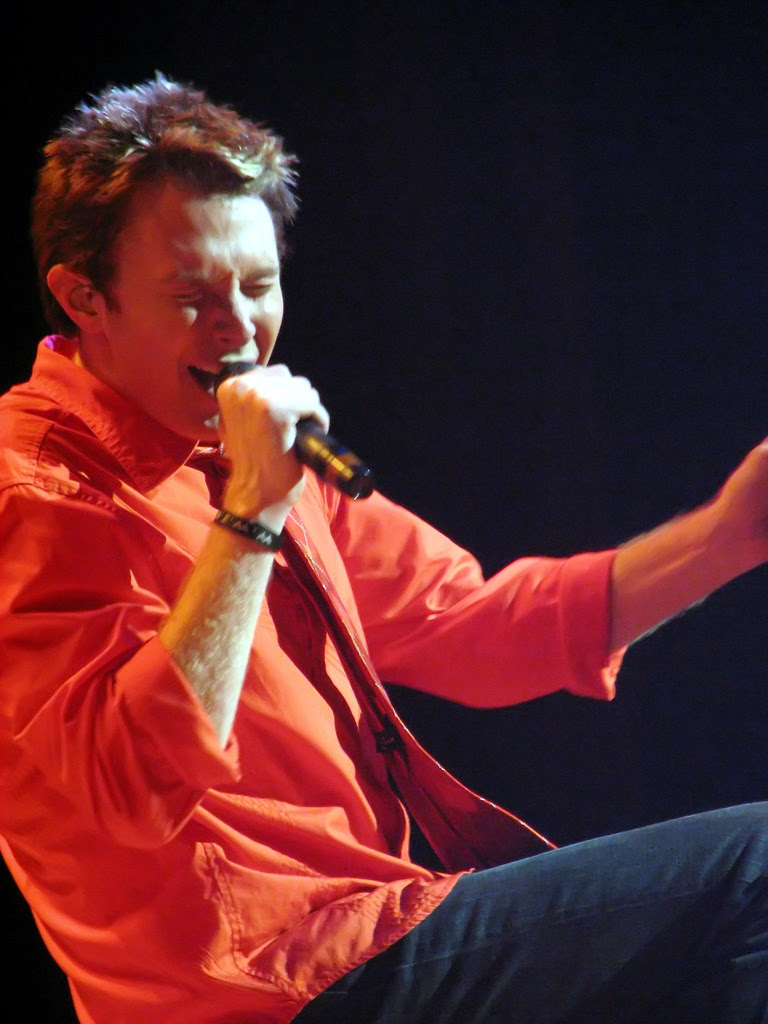