This past weekend, buddy Jugweed and I journeyed into the wilds of Missouri to play some poker in Kansas City. Although KC is basically Jugweed's second home (as Kansas native and KU grad), let's just say that a Husker fan and a Jayhawk fan driving a car with Iowa plates through Missouri is generally a poor idea. Nonetheless, despite some sketchy weather, we arrived at Harrah's—North Kansas City in just over two and a half hours. Check-in was friendly, with the front desk clerk looking over my Total Rewards history and giving me a 50% discount on the room rate I had booked on the Total Rewards website. I'm fairly sure that the comp was in part because this was my first trip to that particular casino, yet it was certainly unexpected and greatly appreciated.

The hotel is very nice, with a sweet-looking conference area where I wouldn't mind spending some time for a CLE seminar or corporate retreat. The rooms were rather small, but were good quality, on a par with Holiday Inn Express, and perfect for a couple of guys who were just crashing for a few hours after a marathon poker binge (we stayed in a basic "deluxe" room, but I presume the "premium" rooms and suites are a little swankier).

We took a spin around the casino, which was clean, classy, and nicely decked out, but nothing spectacular—it would fit right in on the Vegas Strip as another Monte Carlo-esque mid-tier property. We then headed to restaurant row by the casino entrance for dinner, selecting Mike & Charlie's Italian Restaurant. We both had chicken spiedini for dinner—Garozzo sauce for Jugweed, Gabriella sauce for me—and cinnamon banana bread pudding for dessert. Tasty meal at a decent price.

Starvation averted, we headed to the poker room. The poker room has 14 tables, and all were full by 8:00 p.m. Friday night. There were several big games running—50/100, 10/20, and 5/10 NLHE, and 20/40 LHE—along with several tables each of 1/2 and 2/5 NLHE and 3/6 LHE. Intriguingly, a sign on the wall indicated that the room has discontinued all Omaha games "for lack of interest", allowing the room to roll the Omaha bad beat funds into the Hold 'Em bad beat jackpot. The room is off the second floor of the casino, but plenty of slot sounds and some tobacco smoke drifts into the room. Floors were good at starting games and seating players. Altogether a nice poker room.

Jugweed and I were seated at the same 1/2 NLHE table with almost no wait. One downside to the room is that the 1/2 NL buy-in is $60-$200, so the money in play is generally less than usual for 1/2 NL, and the effective stacks are likewise smaller. Still, the action turned out to be pretty good, with plenty of fishy play on display. During the first 10-15 hands at the table, one guy who I dubbed the "expert" tried to run over the table with big bets. On four or five occasions, the expert made a river bet, was called, and immediately said, "You're good" and mucked after being shown top or second pair.

I immediately targeted the expert, and tried to get into pots where he seemed to be raising light. I didn't win any monster pots, but the expert gave me at least $400 with bad bluffs and worse hero calls of my value bets. Gawd bless! In a bit of irony, the expert started button-straddling, and woke up with Aces twice in an hour. I joked with him that I needed to button straddle so I could get Aces. Instead, twice on the button I found Kings, and both times they held up for decent pots (including a payoff by the expert with top pair no kicker). I also managed to stack Jugweed once, when I made a rather sketchy turn call with a flush draw that hit, then pushed the river where Jugweed made a rough crying call with top pair. Altogether, I managed to turn a profit of ~$650 in about eight hours of play. Not too shabby for my first session in this room!

One interesting thing I noticed about the room was the use of these devices: 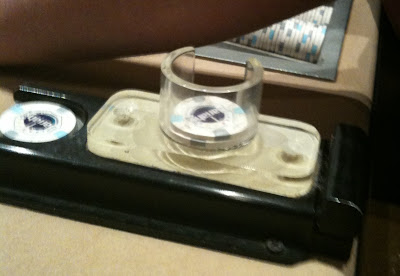 Basically, these are plastic chip stackers, used by the dealers to collect $1 tips. When $10 is reached (or $5 at the end of their down), the dealer will convert the $1 chips into $5 chips and put those into their personal toke box. I like this arrangement, as it noticeably extends the time between bank fills by keeping more $1 chips in play. An identical chip rack on the opposite side of the dealer is used to collect and color up $1 jackpot drop chips (or so it appeared).  Just an interesting innovation I had never previously observed.

As 3:00 a.m. approached, tables started breaking and the action tightened up significantly. Jugweed and I stayed until our table went to five-handed, then we took off, allowing the other three players to fill open seats at other tables. Channeling our inner Cloutier / Ivey, Jugweed and I headed downstairs to cash out our poker chips and check out the craps tables. Several games were in action, so we wandered up to a table with room for us both at my favorite spot, the corner by the dealer. I had two hot rolls, a lady had two good rolls, and Jugweed contributed a solid roll as well, letting me walk away with an extra $1,200 profit, and leaving behind some very happy dealers who I put on the hardways and the line (with shoes) during my rolls. As I've always said, the three best words in the English language are "off and on".*

One interesting item of note is that the craps tables in use had the traditional yo (11) and craps (2, 3, 12) numbers on the layout along with the traditional "point" numbers (4, 5, 6, 8, 9, 10). Under this version of the game, a yo on the come out roll is no longer an automatic winner, and the craps numbers are no longer automatic losers. This was a first for me, and it took a few rolls to adjust to the odds offered by the new bets offered on this game layout. Based on a little research, it appears this version of craps is referred to as "crapless craps", since the craps rolls are no longer automatic losing numbers, and there is no "don't pass" line. Although avoiding three automatic losing rolls while giving up only one automatic winning roll seems superficially advantageous, the ever-helpful Wizard of Odds demonstrates that the crapless version of the game has a significantly higher house edge than does the regular game of craps. In fact, the crapless version of the game offers essentially the same house odds as double-zero roulette—poor. But, with a few hot rolls and a focus on the better odds bets, the game is still a fun diversion.

After a good night's sleep, Jugweed and I drove downtown for lunch at Bo Lings, a Chinese restaurant located near the Plaza by the KC Board of Trade. Saturday lunch is a dim sum affair, and we had a dozen or so amazing dishes. As an aside, Jugweed's wife is of Chinese ancestry, with parents who actually grew up in Taiwan. Jugweed's wife and mother-in-law cook awesome Chinese food, and they wholeheartedly endorse the food at Bo Lings. I can certainly understand why, as I enjoyed all the food. Favorites included the chive balls, "shark fins" (dumplings with shrimp and pork filling), and shrimp claws. Stop by if you get a chance! 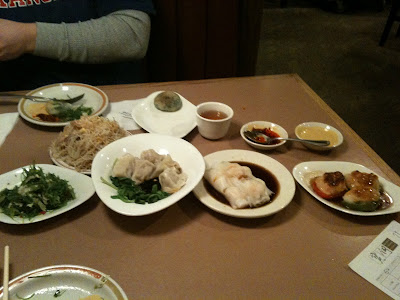 Roughly one-third of our lunch at Bo Lings.
After lunch, Jugweed and I stopped by the Ameristar casino to check out the poker action. This casino is incredibly elegant and classy, with decor befitting it's Mississippi riverboat heritage—think dark wood, colored skylights, and chandeliers, along with a replica train in the front restaurant area. The poker room is upstairs, and has at least 20 tables. There were four tables of players in a noon tournament, and three 1/2 NLHE cash games underway. I went to a table where I was seated next to Oscar the Grouch. Jugweed was sent to another table, where he was seated next to Danny Tims, a Bellator MMA fighter. Yup, that's how I run in player selection.

When life gives you lemons, make vodka lemonade. Oscar the Grouch was an old fella, who whined non-stop about how the dealers gave him bad cards, or dealt bad flops, or let opponents hit draws. If someone raised his blinds, or raised after he limped, he'd muck and mutter rather loudly, "F*ck off!" The Grouch cost me $75 late in the session, when he called a $95 all-in on a board of Q-8-5 rainbow with ... KJ offsuit. The Grouch's call gave me odds to call with my 76 for the open-ended straight draw, and we both blanked out to let the original bettor win with Q9 offsuit. Oh yeah, the table was that soft! The good thing was that the Grouch was out of cash and tilted off into that good night ... errr, afternoon.

So, did I mention the table was soft? Once again, players overplayed top pair like it was the immortal nuts, made bad bluffs, and called down light. I won $610 in roughly two hours of play. In one big pot, I doubled up for over $250 when I played Jc8c on the button, flopped top two pair, and got called on all three streets by Q5 sooooted who caught a Queen on the turn. How kind. I then parlayed that stack into a bust of the table bully for just over $400, when I played KhQd on the button for a raise. We went to the flop heads up, which was all low cards with three hearts. He checked, I c-bet, he raised, and I called. The turn brought the Jack of hearts, giving me the second nut flush. Bully led out, and I called, confident he would bet the river. The river brought a second trey, pairing the board. Bully checked, and I value bet $75. Bully pushed over the top for about $130 more. I snap-called, reading him for a bully move with a smaller flush. Bully proudly declared "Queen high!" and rolled the Queen of hearts. I rolled my hand and scooped a monsterpotten. Thank you, come again! Bully stomped off to rebuy chips while the rest of the table debated how they thought I misplayed the hand. The free poker lessons were greatly appreciated, gents!

Altogether it was a fun and profitable trip. I can't wait for my next trip to Kansas City. Kansas City poker rooms, here I come!