A Big Hand for a Big Guy

"I'm not in the thinking business."

Sometimes, poker can be a grind. Premium starting hands few and far between, bad flops galore, and scads of missed draws. On those days, it can take every ounce of skill just to eke out a small win. In fact, the ubiquitous use of "grind" (and its cousins, "grinding" and "grinder") in the poker vernacular reflects the perceived need to manufacture profits out of small edges, thin value bets, and situational steals. In many ways, the modern aggressive grinding strategy is simply the logical fruition of Doyle Brunson's Super/System strategy of contesting even small pots on the theory that winning many small pots gave him an edge when big pots were contested.
Although grinding might be the most profitable—or at least most consistent—strategy at higher stakes games, I've found that low stakes no limit hold 'em games are profitable because of the big pots. In a typical $1/$2, $1/$3, or even $2/$5 game, the blinds are so insignificant that jousting over a limped pot offers poor risk-reward odds. Instead, the real money to be made is in the big hands that develop over the course of a session. Win a majority of the big hands—sets versus two pair, boats versus flushes, trips versus overpair, etc.—and you will usually walk away a big winner. Lose a majority of those big hands, and you'll likely wind up a loser regardless of how many small pots you drag.
Recently, I played a session at Riverside. I got up early by flopping a set of Queens, but busted and rebought when my Kings were cracked three times in two orbits. One cracking occurred when my button preflop 3-bet to $57 was called by QQ and QJs; naturally the case Queen flopped, and I paid off the extra $150 after both players pushed in front of me. I rallied and made a buy-in profit when my Queens twice held up after preflop all-ins, and after flopping trips against a player married to his Aces. Although I did steal one nice pot with a preflop squeeze play, the remainder of my session was mostly spent either folding or limping into pots against specific players, looking for opportunities to generate a big pot in an advantageous spot.
Last weekend, I played an afternoon session at Prairie Meadows Racetrack, Casino, & ATM. Typical for an afternoon game, the table was filled with nits and rocks, most nursing stacks under $200. There were a couple of deeper stacks, so I bought in for the maximum of $300. Also typical for this kind of game, players limping in almost invariably called any preflop raise, even a raise to $17-$22.
I settled in for a grinding session, praying an action player or two would show up early for the generally looser, wilder evening games. There was no need to wait. Barely five hands into my session, I was dealt JdTh in MP. I limped in after another limper. The player to my left raised to $12, and was called by two LP players, the BB, and the limper before me. So, I called and closed the action.
The flop came down: KdQd9s. Yahtzee! I barely had time to contemplate the best way to play my monster hand when all hell broke loose! The BB pushed for roughly $100 and the player after him pushed for roughly $150. I thought a bit, then made the only real play, pushing all-in myself for nearly $300. Imagine my surprise when the preflop raiser also pushed for over $300, and an LP player also pushed for almost $200. Holy action flop, Batman!
I fully expected to see a range of hands like KQ, 99, AdXd, and maybe even another JT. I definitely didn't want to see AdTd, the one monster draw that could counterfeit my straight. Instead, I saw: BB with Ad3d, MP with K9o, preflop raiser with KTo, and LP with Td9d. Although I was fading the world—any King, Nine, or diamond beat me, along some runner-runner combos, while a Jack would chop—my opponents were drawing somewhat thinner than usual as they held some of each other's outs (and I also had the Jd). After the dealer, Chase, sorted out the man pot and four side pots (and skillfully so, I might add), he put out the turn and river—3h and 7s. Blank, blank. And just like that, Chase was pushing me a monsterpotten that took a few hands to stack: 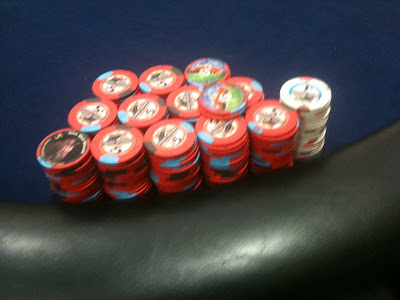 One hand, one monster pot. Including $10 tips to the dealer and
cocktail server, total pot was $1,252, with a net of roughly $950.
Although I played another five hours, that one hand was essentially my profit for the session. I did have several other big hands, including flopping four sets (once cracking both Aces and Kings with a set of 7s), but those pots were offset by my Kings and Queens being cracked twice each, and losing a trips versus trips battle when my opponent paired his kicker on the river. Still, walking out with a three buy-in profit was a rather satisfying conclusion to what had initially looked like a grinding session with little chance for a big score.
So why is small stakes no limit hold 'em such a big pot game while bigger stakes versions seem to be more conducive to grinding? I think the main reason is that small stakes players are more prone to making the true big money errors—calling preflop raises with dominated hands, playing raised pots out of position, being unable to lay down overpairs and top pair hands, and chasing non-nut draws. Big errors, big pots. Small stakes players are simply much more likely to stack off light than are players at bigger stakes games.
Gawd bless 'em!
Posted by Grange95 at 6/05/2011 05:16:00 PM