The Iowa Poker Economy:
Little Rounding Error on the Prairie

Recently I took a look at the economics of the Prairie Meadows poker room in Des Moines, Iowa. Based on data reported to the Iowa Racing and Gaming Commission, my estimate was that rake, jackpot drop, and tips for dealers and servers likely took roughly $4 million a year out of the central Iowa poker economy. But what about all Iowa casinos?

Let's take a look at data for all gambling at all Iowa casinos for Fiscal Year 2010 (July 2009-June 2010). [FN1]. First, the one figure that leaps out of the data is that Iowans (and its visitors) love to gamble, to the tune of gambling losses of nearly $1.37 billion last year. Another striking figure is the sheer dominance of slot machine revenues, which accounts for 93% of all Iowa gaming revenue, and 91% of gaming revenue at casinos with poker. [FN2]. As someone who spends most of my casino time in the poker room, with occasional sessions of blackjack or craps, the fact that most other folks actually prefer to gamble in the rows and rows of slots really hadn't registered with me. 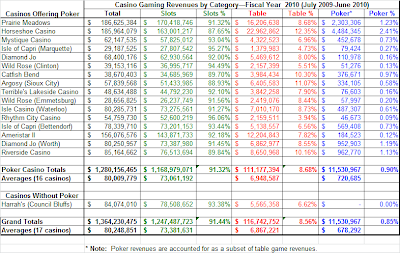 (Click on charts and tables for a larger view.)
Still, the table game revenues in Iowa, although dwarfed by the slots, are nonetheless nothing to sneeze at, coming in at nearly $117 million last year. Poker revenues (which are counted with the table game revenues) accounted for a mere $11.5 million last year, a sizable chunk of change that is nothing more than a minor rounding error on the casino balance sheet. And poker players wonder why they are treated as the red-headed stepkids of the gaming world.

(Click on charts and tables for a larger view.) 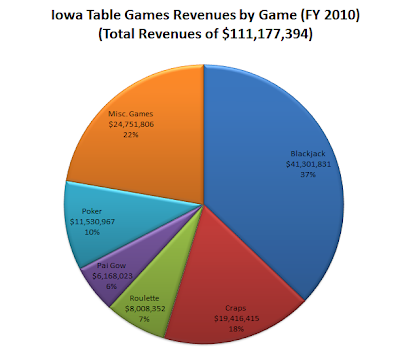 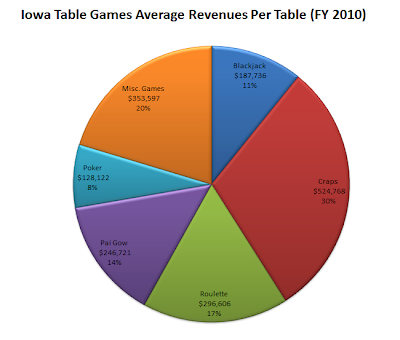 The per table statistics are interesting to me, because a table game in the pits and a poker table should have roughly similar cost profiles. Each table requires a dealer, cards/dice, and an automatic shuffler (or wheel for roulette). Each table takes up roughly the same floor space, and can serve roughly the same number of players. One pit boss / floor person in the pits or the poker room can supervise roughly the same number of tables. The one exception is craps, which requires three dealers and a boxman per table, and a pit boss overseeing, at most, three to four tables. Still, pit games and poker should be roughly comparable on a per table cost basis. Thus, poker lagging in per table revenues certainly can't endear the game to casino management, who have to maximize casino revenues in every square foot of gaming floor space.

Table games have a few built-in advantages over poker. Most important, table games can be played on an individual basis, while poker games rarely start or continue running with fewer than five players. Also, poker can only offer the house a steady rake, while many table games offer sucker bets with a 5-10% (or better) house edge. Still, poker does bring in revenues that might otherwise escape the casino's greedy paws, and a million extra dollars of revenue can help pay the electric bill. [FN3] In many ways, poker resembles gasoline at a convenience store—a product with a low profit margin that hopefully entices players to come inside and purchase higher profit margin products like soda and groceries.

Looking at the four biggest Iowa poker rooms by revenues—the Horseshoe in Council Bluffs, Prairie Meadows in Des Moines, Riverside near Iowa City, and Diamond Jo in Worth County—these four rooms account for over 75% of Iowa's poker revenues. The Horseshoe pulls from the Omaha market, Prairie Meadows dominates Des Moines and central Iowa, Diamond Jo (Worth) draws heavily from Minnesota (where no-limit poker is prohibited), and Riverside is near Iowa City (home of the University of Iowa). Yet of these four rooms, only the Horseshoe and Prairie Meadows really show a significant revenue stream from poker on an overall basis, and on a per table basis, poker continues to be a bit player in the overall table games portfolio even for these four casinos with a large poker revenue base. 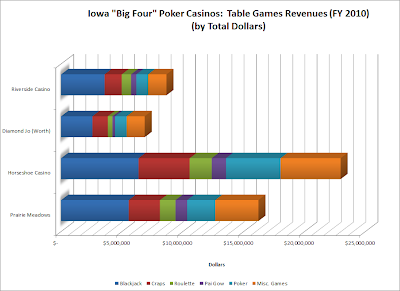 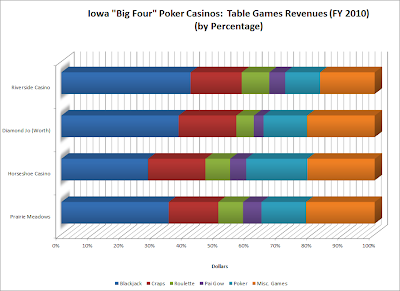 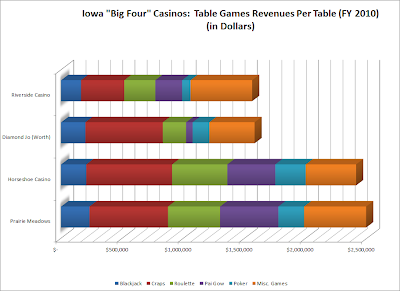 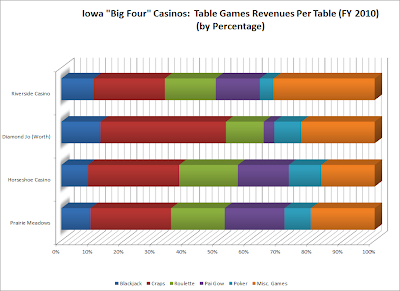 One final interesting set of data can be derived from looking at the overall and per table poker revenues for all Iowa casinos offering poker. The Big Four rooms obviously dominate on a total revenues basis. But, looking at poker revenues on a per table basis, some of the smaller rooms actually are quite competitive. Further, it is clear that Riverside lags significantly on a per table basis given its overall revenues. This is hardly surprising given that Riverside does not use automatic shufflers, forces its dealers to pool tips with other pit dealers, and generally fails to market its large poker room to the Iowa poker community. 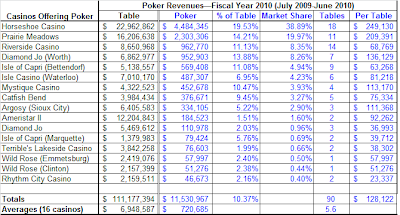 (Click on charts and tables for a larger view.) 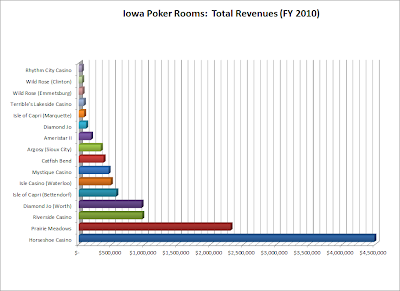 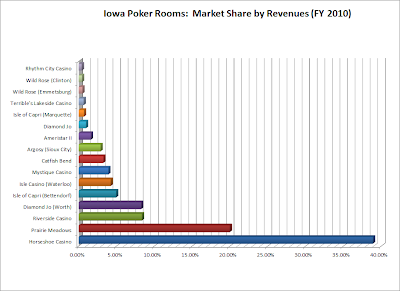 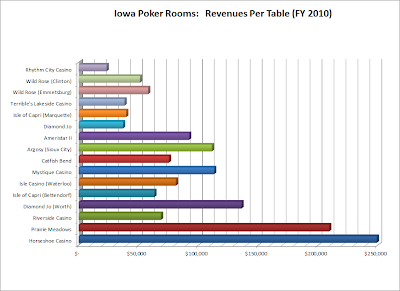 In an upcoming post, I'll look at the overall costs of the Iowa poker economy.

[FN1]  Data for fiscal year 2011 will be available in roughly four to five weeks, and I plan to do a year-by-year look at the progression of the Iowa poker economy once that data is released.

[FN2]  Gaming revenue excludes horse and dog racing revenues, which are not included in these reports.

Email ThisBlogThis!Share to TwitterShare to FacebookShare to Pinterest
Labels: Economics