One of the great things about Vegas is that there are dozens of great places to eat crammed in a small area. On the Strip alone one can find excellent dining experiences at every price point and in every style of cuisine. Every trip I take to Vegas, I make it a point to treat myself to at least one meal each day that I can't experience in Des Moines. Sometimes it's as simple as a gourmet burger or top notch Mexican or Asian cuisine with a fun vibe, while at least once each trip I venture into a higher end steakhouse or TV chef food joint. There's no shame in having a cheap sandwich or chowing down at a mediocre buffet to accommodate time and travel budgets. But it's a damn shame to spend more than a day within an easy walk of so many interesting dining experiences and never veer off the fast food and buffet path.

During the recent WPBT, I got to enjoy several excellent meals. The culinary trip got off to a fast start Thursday night as I went straight from the airport to dinner at Jaleo in the Cosmopolitan. I met up with a hilarious group including Astin, April, Heather, Ryan, Dan, and Stephane, with an after dinner appearance by the lovely Miss Chako. Jaleo is a Spanish tapas restaurant with some intriguing options. We took turns ordering dishes to share with the table, and I can't think of a single dud. Some of my favorites were the lobster paella, the asparagus, the grilled mushrooms, and the Iberico ham fritters. My favorite dishes, however, were the salad of grilled Brussels sprouts and Serrano ham, the endive with goat cheese, and the veal cheeks. Even with wine and cocktails thrown in, the total bill still came in well under $100 per head. Not too shabby a start to the weekend's festivities! 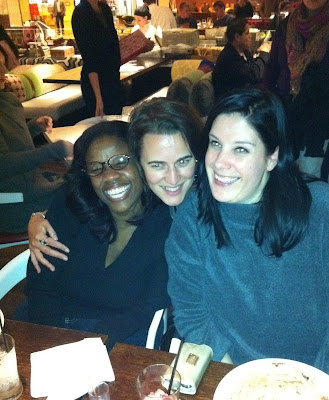 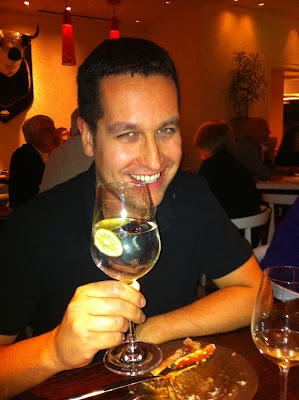 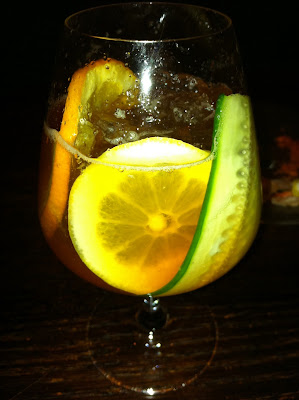 A close up of the world's greatest gin & tonic.

Friday was my birthday, but because I stayed up until 9:00 a.m. playing poker, I slept in until mid-afternoon. Since I was staying at Paris and had a Total Rewards coupon for a free burger, I treated myself to a burger at Le Burger Brasserie, one of my favorite solo Vegas dining locations. I went with my standard—the Saveur, a lamb burger on a wheat bun with mushrooms, mozzarella, and herbs. Tasty! For some reason, I forgot to use my coupon, so my last meal of the trip—lunch on Monday—was a repeat trip for another lamb burger, this time built from scratch with pancetta, chevre, and roasted red peppers, with a side of sweet potato fries. A perfect end to a great culinary weekend! 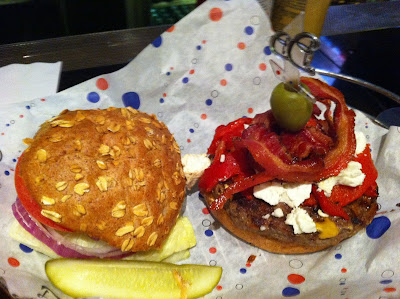 Even though I was stuffed from my birthday burger, a small part of my stomach was jealous of the Friday night dinner antics of a group that included FTrain, MrChako, and culinary genius Astin. I know those three were enjoying a great meal at Raku because they tweeted a course by course rundown of the delectable dishes they were served, often with pictures. Just check out Astin's photos of the meal (here, here, here, and here) and tell me you aren't drooling just a little.

Saturday saw me waking up bright and early by 9:30 a.m., anticipating the noon WPBT tourney at Aria. My worries about pre-tourney sustenance were assuaged by a Twitter invite from Heather to join a motley crew for the brunch buffet at Wicked Spoon in the Cosmopolitan. I think it was most of the Jaleo crew, plus Chilly, Gus, Marty, and OhCaptain. This was easily the best buffet I have ever sampled (though in the interest of full disclosure, I have never tried the buffets at Wynn, Bellagio, or Aria). There was a great spread of food, including a salad bar I breezed past on the way to a meat carving station loaded with ham, linguica sausage, leg of lamb, turkey, slab bacon, and prime rib. I also grabbed single serve pots of short rib eggs Benedict, asiago gnocchi, and bacon mac 'n cheese, along with some awesome mushroom polenta and a variety of desserts. As is the case with most buffets, there were some hits and some misses, but overall the buffet offered great variety and good value for the money (~$30, $39 with the all you can drink mimosas and bloody marys). My personal favorites were the short rib eggs Benedict, leg of lamb, and bacon mac 'n cheese. Definitely worth another visit for dinner, where rumor has it there is a made to order mac 'n cheese station. 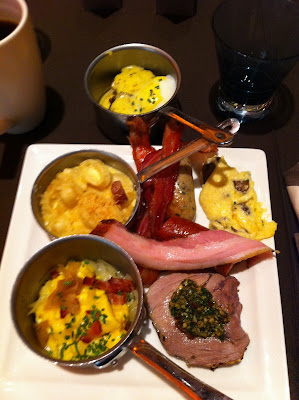 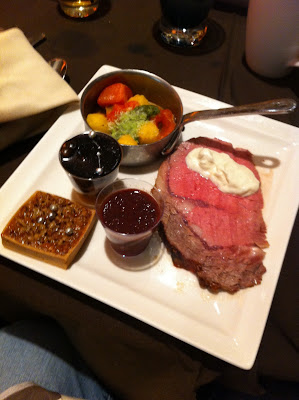 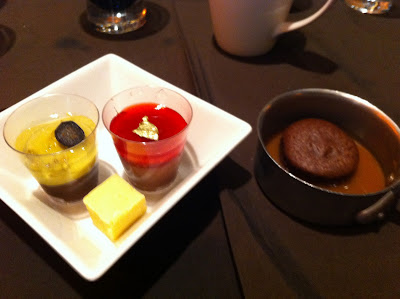 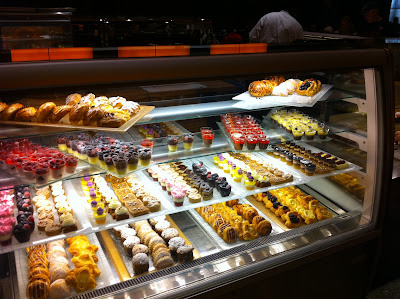 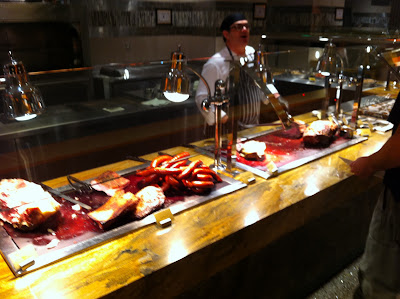 Saturday night rolled around, and I found myself headed to CarneVino, super chef Mario Batali's restaurant at Palazzo, with friends Caity, Carol (a/k/a the Black Widow of Poker), and Astin (living up to his reputation as a culinary slut). CarneVino is one of my favorite Vegas restaurants (as an aside, if you're in Vegas solo, eating at the bar in a fancy restaurant is a great dining option; no need to feel bashful!). Carol happens to be connected to the manager, so we were given a little hook-up for our meal. We began with pastrami with duck egg, another appetizer I've forgotten, and a tuna tartare compliments of the chef (thank you Carol!). The tartare was amazing! For the pasta course, we sampled the duck cannelloni, the duck liver and pork ravioli, and the gnocchi bolognese (again, compliments of the chef). For this course, the ravioli stole the show. For the entree course, Astin picked a solid barolo that paired well with our grilled veal sweetbreads, grilled venison with huckleberry demiglace, grilled lamb chops, and grilled bison. Despite my solid credentials as a former farm kid who showed livestock and judged meat, I was a sweetbreads virgin, and the ones here were underwhelming—not  bad, just not as amazing as the red meat dishes. My personal favorite had to be the venison—just a bit gamey like a good lamb dish, but melt in your mouth tender and exploding with flavor. However, what truly made the dinner a major highlight of my trip was getting to know my companions better, where they came from, how they tick, some of their quirks, and what makes them laugh. Dinner took almost three hours, but seemed to fly by in a wink. Truly a wonderful experience that made the whole WPBT trip worthwhile. 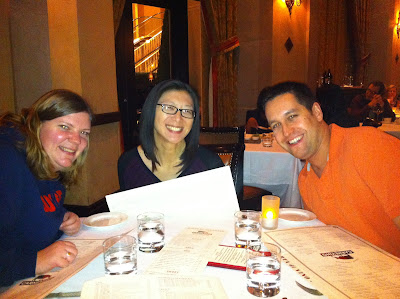 Sunday marked the winding down of the WPBT festivities, but my culinary adventures were not quite concluded. After cheering on some of our WPBT compatriots in the Rock 'N Roll Marathon, I found myself starving and headed to Lemongrass at Aria for a late dinner with Allen, Steve, and Dave. This dinner was a real treat, as I had really not had much interaction with these three gents beyond a cursory howdy and an hour or two at the poker tables. Despite reading their blogs and following them on Twitter, this dinner was the first chance I had to get to know them a little bit as regular folks. Well, perhaps irregular folks. In any event, dinner was an hour or two of laughs, and a truly memorable evening. One of the highlights was when Steve articulated my motto for fine dining and fine living—when you get the chance, you might as well try something new. For Steve and me, that meant diving into an appetizer of—cold jellyfish. The dish was actually quite tasty, with a surprisingly firm crunchy-chewy texture, seasoned with a little vinegar, sesame oil, and chili flake. Certainly not anything like what I expected, but something I would gladly order again. For my entree, I went with my standard Drunken Noodle, but this time, a "6" on the heat scale went to an unexpected inferno level, causing me to break out in a sweat quite noticeable on my fuzzy bald head. And yes, my companions might have noticed. But a little ribbing fit right into the light-hearted banter that made dinner a fun way to wrap up the WPBT weekend. 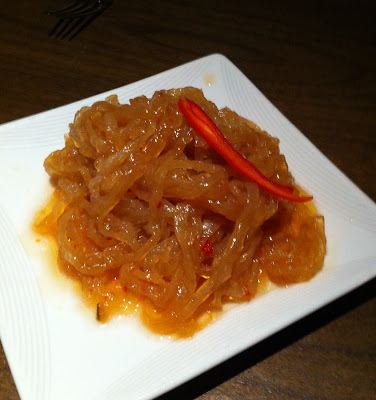 As much as I love poker and degenerate gambling, what makes WPBT special is the people. And this trip, food gave me the opportunity to truly enjoy those people as people, not as poker players. Poker might bring us together, but all of us are much more than poker players. I'm grateful something as basic as food gave me the opportunity to glimpse the human sides of so many WPBT folks.


“If more of us valued food and cheer and song above hoarded gold, it would be a merrier world.”

~ Thorin Oakenshield in The Hobbit, by J.R.R. Tolkien