Harry Hartounian:  Boy, I wish I could get that excited about nothing.

Navin R. Johnson:  Nothing? Are you kidding? Page 73 - Johnson, Navin R.! I'm somebody now! Millions of people look at this book everyday! This is the kind of spontaneous publicity - your name in print - that makes people. I'm in print! Things are going to start happening to me now.

Friday was an exciting day for the Ironman of Poker (IMOP) crew, as official invites arrived via cruise director Santa Claus’ secret email account. The IMOP-V crew is officially set, giving us our official theme—“A Wolfpack of 12”. Pledge names have been assigned to the newbies—Colt, Fat Jesus, River Joe, Baby Carlos, and Mr. Chow.

We are already booked in Rialto View Suites at the Venetian, taking advantage of the scandalously low, insider-trading level poker room rate. Santa Claus correctly describes these accommodations as “1,100 square feet of pure awesomeness.” Somehow the six hours per day of mandatory poker play doesn’t seem all that challenging of a hurdle.

Returning events this year include the four NLHE tourneys we will play as a group, though the Sahara has fallen out of the rotation for the first time ever (much to the joy of Ironman “Sahara” who has made this request four straight years). This year’s IMOP-sanctioned tourneys will be held at Planet Hollywood, TI, Mirage, and Aria. Fittingly, the Mirage is a nod to IMOP history, as it has not been on the calendar since IMOP-I, while Aria is the new kid on the poker block, providing temporal symmetry to events (not that we really care). Also returning will be the ugly jacket dinner, this year at Nob Hill in MGM. As three time and only champion ever, I am a prohibitive favorite to win this event. In case you scoff, here are my entries from the past two years (with a cameo from Sahara himself in last year’s picture): 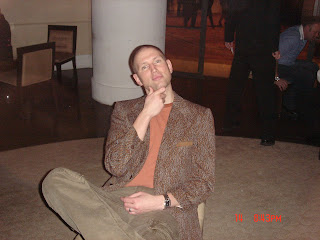 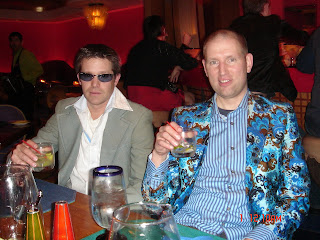 First they didn't have the bamboo umbrellas for the drinks, and now snails on the plate!

New events this year include the first ever team competition, with three teams headed by the three all-time IMOP champions. We will also be having a pledge hazing event, involving a quiz about IMOP history and The Hangover. Losers will be required to play the opening tourney wearing interesting outfits, shall we say.

One of our IMOP newbies—Pledge Colt (so-named as the doppelganger for some Longhorn who had a bad day against a Boy Named Ndamukong Suh)—already has regaled the IMOP crew with a worthy IMOP-pregame poker story from a weekend trip by several of the IMOP home game crew to Riverside Casino:

“Why was this anything less than a positive experience for you, Colt?”—you might ask. Well, I’ll tell you.

After returning from taking a leak and sitting back down—I watched the hand play out—even commenting that the river card (King of clubs) had the making for a bad beat jackpot to those around me. Once the cards were flipped over; we went nuts—and then later found out you had to be DEALT in the hand to be eligible for 25% of the jackpot ($55,000).

With that said—if I were actually in the hand—the beat would have never happened and Fat Jesus wouldn’t have free-rolled his entire IMOP trip (yes—[Pledge Fat Jesus] was dealt in that hand).

I vow to take no leaks this entire trip.

If this story is an IMOP omen, events this March will indeed be the highest and jinkiest ever!


I'm a jerk. I once had wealth, power, and the love of a beautiful woman. Now I only have two things: my friends and, uh, my thermos.