Before jumping into the fun, let's pause for a moment's reflection on the stupendous, revolutionary thought that grounds the Declaration of Independence:

We hold these truths to be self-evident, that all men are created equal, that they are endowed by their Creator with certain unalienable Rights, that among these are Life, Liberty and the pursuit of Happiness. — That to secure these rights, Governments are instituted among Men, deriving their just powers from the consent of the governed, — That whenever any Form of Government becomes destructive of these ends, it is the Right of the People to alter or to abolish it, and to institute new Government, laying its foundation on such principles and organizing its powers in such form, as to them shall seem most likely to effect their Safety and Happiness.

Sometimes with all the hyper-partisanship in politics, we forget how fortunate we are to be living in a country where we are truly free to criticize the government and advocate for change.  Our country may not be perfect, but we are always striving to live up to our nation's ideals.  So, during your celebrations, tip a glass to the Founding Fathers, and have a moment of reflection in honor of all those brave soldiers who have fought for our freedom over the decades:

If tomorrow all the things were gone,
I'd worked for all my life.
And I had to start again,
with just my children and my wife.
I'd thank my lucky stars,
to be livin here today.
‘Cause the flag still stands for freedom,
and they can't take that away.

And I'm proud to be an American,
where at least I know I'm free.
And I wont forget the men who died,
who gave that right to me.
And I gladly stand up,
next to you and defend her still today.
‘Cause there ain't no doubt I love this land,
God bless the USA.

* * * * *
You occasionally hear about the outrageous demands made by rock stars and celebrities in their appearance contracts.  These "riders" sometimes border on the absurd:  Iggy Pop wants seven dwarves backstage, while Jennifer Lopez wants her coffee stirred counter-clockwise only.  Recently, Steve Martin's rider leaked (though it leaked on Steve Martin's official website, so read with tongue firmly in cheek).  Highlights:

SOUND CHECK—All instruments must be tuned by a wiry, sarcastic guy named Shorty, Lou, or Lightnin'.

BUFFET—A tray of iceberg lettuce.  IMPORTANT NOTE:  Iceberg must come from Scandinavia, Canada, or Russion Arctic.  Artists do NOT like the taste of Antarctic iceberg.

AROMATHERAPY CANDLES—At least six (6) but no more than sixty-five thousand (65,000) holistic aromatherapy candles shall be placed in dressing rooms and lit no later than 1 hour prior to Artists' arrival, enough to resemble Susan Sarandon's bathroom in "Bull Durham".  Approved scents include Sandalwood, Clover, and Flop Sweat.

* * * * *
Our weekly fix of Neatorama.com highlights include:

* * * * *
For our sausage news of the week, Copyranter posted an antique ad for a Universal Food Chopper.  This brought back childhood memories of making homemade sausage with Grandpa and Dad, who used one of these hand grinders.  One of the best things about growing up on the farm was doing morning chores during the winter, knowing that hot sausage and eggs would be waiting at home.  High five to my German immigrant ancestors on this great American holiday! 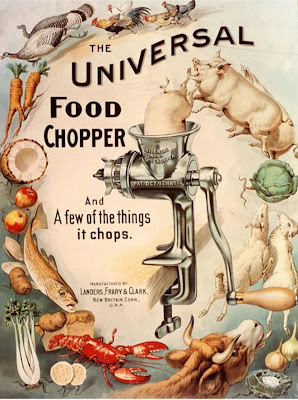 * * * * *
A hilarious new blog, Catalog Living, gives readers a look inside the lives of the folks who inhabit the houses depicted in home decorating magazines.  For example: 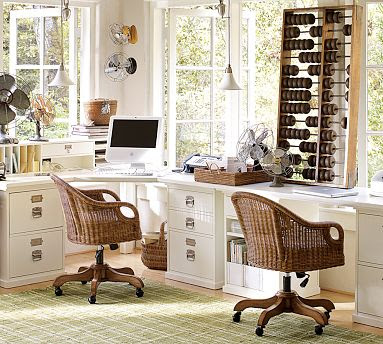 "Elaine wasn’t about to let some hot flashes get in the way
of balancing the checkbook with the abacus."
* * * * *
Finally, here's why Lassie the Cat failed as a TV spin-off: