Reheating the Sh*t Sandwich from the Online Poker Hearing

"The review for 'Shark Sandwich' was merely a two word review, which simply read 'Shit Sandwich'."

—This Is Spinal Tap

The poker world has been busily digesting yesterday's Congressional hearing regarding online gaming legalization.  The reviews are rolling in, with fairly standard pro-Poker Players Alliance (PPA) and pro-Annie Duke reactions from Poker News Daily, Bluff, Card Player, Pocket Fives, and the PPA itself (the self-annointed "leading grassroots poker advocacy group").  Kevin Mathers at Pokerati noted that a markup of the bill (an amending process prior to a final committee vote) may be scheduled as early as next week.  Matthew Kradell at Poker News noted an important development—the U.S. Chamber of Commerce, which is a very influential lobbying group on business (read: Republican) issues, has endorsed Rep. Frank's online gaming legalization bill.

I have also run across some interesting additional information and commentary about some of the issues I addressed in my initial post about the hearing.  First off, Politico is reporting that some Republicans in the House are dissatisfied with Rep. Bachus, the outspoken critic of the online gaming bill at the hearing.  Apparently, some Republicans view Bachus as a weak leader, and want to strip him of his ranking member status on the Financial Services Committee.  This has major implications for online poker legalization, as the ranking member position generally moves into the committee chair position if his party gains a majority in the House, which may occur in the upcoming elections.  Also, the ranking member has a great deal of influence on legislation even while in the minority.  So, anything that reduces the influence of Rep. Bachus is a win for online gaming supporters.

I previously questioned why Annie Duke would be chosen to represent the PPA at the hearing, particularly in light of her involvement with Ultimate Bet, and the taint of the Russ Hamilton "super user" scandal.  Turns out, some folks over at 2+2 had similar concerns.  What is interesting is the response from a PPA yo-yo master and 2+2 poster "The Engineer":

PPA did not this time, nor have we ever had any role in the choosing of witnesses for hearings in the House of Representatives.  Invitations to testify are made by the committee staffs and are rarely done with any input from those involved lobbying on those issues.  Annie Duke was invited by the committee staff, we were informed of that, and we work with what we are given.  While I understand your distaste for what you may perceive as her role in the UB/AP scandal, her presence today was not of our choosing, but she will again be an excellent witness on our behalf and the behalf of poker players, and we will support her with vital information and preparation so that she will be effective in that role.

Now, I'm not certain how much truth there is to this response.  The committee certainly picks its witnesses, but when Congressmen are dealing with friendly lobbying groups that support their bill, you can bet they and their staff coordinate with those lobbying groups to get a solid witness with no hidden issues that might blow up while testifying.  You can bet the committee didn't get Annie Duke's name from watching WSOP highlights on ESPN late at night.  In fact, based on an old 2+2 forum post by PPA executive director John Pappas, it appears Annie Duke first appeared on the Congressional radar back in 2007 when she testified in front of a different committee (the Judiciary Committee) chaired by Rep. Conyers.  Although Conyers requested Duke's testimony, Duke was introduced to Conyers by the PPA during a "fly-in" lobbying event.  The criticisms against Duke at that time were related to accusations of unethical conduct as a poker player, rather than the UB scandal, which had yet to break.  In any event, it seems pretty clear that the PPA could have made some effort to suggest a better spokesperson to the committee, or suggested to Duke that she politely decline the committee's invitation to testify (this wasn't a high profile investigation where the committee would compel testimony from a reluctant witness, plus Duke was called as a "friendly" witness in support of the bill).  The excuse that the committee didn't consult with the PPA regarding witnesses is either a lie or a cop-out.

While we're on the Annie Duke / Ultimate Bet topic, today I went back and reviewed Duke's written statement submitted to the committee (prepared by the PPA).  It echoed the answers Duke gave when confronted with the Ultimate Bet scandal during the hearing:

For me, the most critical component of regulation is player protections.  As some of you know, I play at a site called Ultimate Bet.  Under previous management, an associate of the website developed a breach in the software that allowed for players to be cheated out of a great deal of money.  I agreed to continue to endorse the site only after I was sure that new management had addressed the problems, took voluntary steps to refund the cheated players and ensured tighter control over their site security.  Nonetheless, an important benefit of regulation would be to ensure, through source code-based testing and outcome-based testing, that the games are fair and those players cannot be defrauded by the sites and that players cannot cheat others at the table.  Further, under a U.S. regulated system players would have legal recourse should they feel they are harmed and regulators would be able to penalize licensed companies that breach the regulatory standards.  Today, the best non-U.S. licensing regimes already do this, but, U.S. players deserve the protections and assurances of their own government.

I find it interesting that Duke essentially argues that poker should be legalized so that, if scandals like UB occur, then companies could be forced to take corrective action. Ummm, didn't Duke just tell us that UB was the paragon of virtue and cleaned up its mess without anyone holding its feet to the fire?  That's just a really curious argument to make—"Please legalize poker, otherwise we may cheat our customers again!"

(The argument that legalization and regulation is needed to protect U.S. online poker players from fraud and to provide jurisdiction for civil and criminal remedies is a strong point for the pro-legalization side.  I just find it a bit rich that Ultimate Bet, of all sites, is the advocate for online poker regulation in the U.S. when it has been anything but forthcoming about the details of the "super user" scandal as well as how it investigated and remedied the fraud, with major questions still unanswered even now, more than two years later).

Finally, there was an interesting "real time" discussion thread on 2+2 which ran contemporaneously with the televised hearing.  One of the most intriguing posts was by PPA muckety-muck Patrick "Skallagrim" Fleming, an attorney and poker player who posts under the same nickname at 2+2, in response to another post questioning the PPA's motivations and goals:


Sadly, you don't know anything about the PPA.

One of the major reasons the PPA wants a US regulatory scheme is to ensure that US players have full legal recourse for disputes and that sites that fail to provide a fair game are accountable in a US court of law.

The PPA also supports full and open competition under appropriate regulations, as that is what ultimately provides the best deal for the players.

The vast majority of PPA members want to be able to continue to play poker on the sites they have come to know and, to one extent or another, trust.  The PPA does prefer that these sites also be allowed to compete in a future market.  But only with some clear restrictions regarding fairness of the game and players' economic and informational security and site accountability (and that may well exclude some current sites from being able to obtain clear US legal status).

Furthermore, the PPA is not concerned with protecting the interests of existing poker sites against future competition—if a law passes that otherwise provides a good deal for US players but is somehow unfavorable to existing sites, so be it.  That is a site issue, not a PPA issue, and the PPA would still support the law.

Now, I also have strong concerns about the PPA's motivations and the looming conflict of interest between the PPA's membership, which presumably wants legalized online poker, and its leadership, which is dominated by individuals who own or are affiliated with established online poker sites which may be shut out of the U.S. online poker market as a necessary compromise if Rep. Frank's bill is to have a shot at moving forward.  Now it's nice that Skallagrim asserts that the PPA is willing to throw established online poker sites under the bus if necessary to advance the cause of legalization.  But it seems to me to be something easier said than done.  Let's look at one of Skallagrim's early PPA forum posts:

On May 7, 2008 the first meeting of the PPA's Litigation Support "Team" took place at the offices of the PPA in Washington, DC. Attending were John Pappas (PPA Executive Director), Myself (Patrick "Skallagrim' Fleming, PPA Litigation Support Director), my fellow attorneys Tom Goldstein and Ken Adams, both of Washington, Andrew Woods (another attorney and Director of the Global Poker Strategic Thinking Society at Harvard Law), and Poker Professionals and authors Howard Lederer, Andy Block, Chris Ferguson, and William Chen.  Also present was Mr. Lederer's wife Suzie.  Everyone present contributed substantially and the meeting was, IMHO, extremely productive.

Lederer and Ferguson, two of the founders and owners of Full Tilt, also remain two of the seven directors of the PPA, along with PokerStars-affiliated Greg Raymer.  Clearly Lederer and Ferguson have been key figures in the PPA since its inception, and have played significant roles in developing the PPA's litigation and lobbying strategies.  If and when—and the "when" is looking increasingly like "sooner rather than later"—the online poker legalization bill is amended to include "poison pill" provisions to prevent current online sites from becoming approved to do business in the U.S. market, how easy will it really be for the PPA to look Lederer and Ferguson in the eye and tell them that the PPA wants to support a death sentence for Full Tilt, at least in the United States?  Does anyone really expect Lederer and Ferguson to approve a PPA lobbying strategy that is a death warrant for their own business?

"Life is a shit sandwich.  But if you've got enough bread, you don't taste the shit."

Why do I get the feeling the PPA is just feeding us a bunch of bread to hide all the bullshit they're serving? 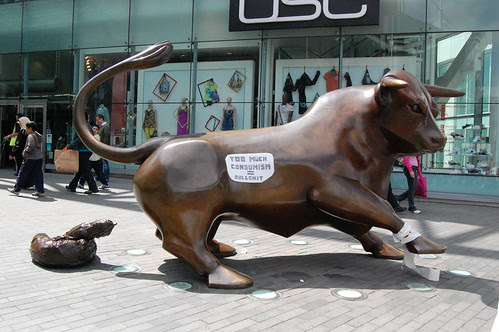