Queens Flame Out at The Meadows ATM

With the holiday weekend coming up, my poker buddy "Jugweed" twisted my arm into playing the Thursday night donkament at the Meadows ATM.  Well, he emailed me to suggest we hit up the tourney, and I decided it was a great excuse to get out of the house for some poker.  "I would love to stay home tonight, but Jugweed really wants me to go, and it's his first night free in months ...."

The tourney itself was rather typical; players get T2500 in chips, with 20 minute levels.  Early on, I built up a few chips with a couple of good starting hands, but I crashed out in the second level when I made a semi-bluff with Ac6c on a two-crub flop.  I got called by QQ (overpair to the board), so my Ace was live as well.  Brick-brick, crubs inexplicably failed to get there, and I got to go play cash games.  Yippee!!

There was a wild 5/5 pot limit mix game going (Hold 'em, Omaha, and Omaha8), but the game was a little too deep and crazy for my blood.  Because I was seated at a 1/2 NLHE game next to the "big game", I got to see at least a dozen pots over $5,000 being pushed (and a couple over $8,000), and stacks seemed to range from $1,000 to $7,000.  The game has been running regularly for a few months now, with a lot of the deep-pocket degenerate gambler types moving from the 2/5 NLHE game to the mix game for the added action.  Some of the play I saw in the Omaha games was pretty atrocious (playing two pair in Omaha, playing for low only in Omaha8 and getting quartered or worse), but the variance has to be enormous.  It will be interesting to see how long the game continues as the wilder players have to be burning through bankrolls a lot faster than at the 2/5 NL game.  Of course, most of that crew are plenty wealthy, and poker is more their gambling table game of choice than a game played for profit.

My game started off fairly standard, but it took a turn for the wild side when a couple of LAG maniacs started getting in a raising war.  Pots got huge, and it felt like we were playing a 1/2/17 game, with preflop raises routinely getting called in 4-6 spots.  In no time, there was a ton of money in play, with multiple players busting and rebuying, while pots over $300 were common.  Of course, the LAG factor pumps up the volatility of the game severalfold, but it similarly pumps up the profitability potential if you properly adjust your game and look for good places to skim the cream off the top as the LAGs churn the action.

One of the LAGs would likely merit a fullscale rant if he ever ran into Poker Grump.  "DV" is a young guy, likely mid-20s, who is uber-aggressive in a way I associate with players who play a lot of online tournaments.  He probably plays 80% of hands, and invariably raises when first into a pot.  DV also rarely folds before the turn, often betting or raising the flop, and occasionally calling to set up a bet or raise on the turn.  He is certainly fearless, and upsets many of the nittier players with his style.  But DV also has a number of quirks I find amusing but which are generally viewed by others as annoying.  First off, he rarely shuts up, yapping away no matter what is going on.  Second, on nearly every hand that doesn't go to showdown, he plays the Grand Inquisitor, grilling the players:  "Flush draw, right?  Overpair?  Two pair?"  I played into this game by alternately agreeing with his read, and simply making up hands; it was actually quite hilarious to mess with DV's head.  But DV's most obnoxious verbal tic was, when in hands he folded before the river, he would claim to have laid down a hand that would have won.  Although DV racked up a big stack, he eventually went bust when a few of his big bluffs were picked off.

I was planning to head home, when the 5/5 big game broke up, and one of the players decided he wanted to donk around in our little game.  "CD" is a good player, but he clearly likes action, and he blew through several buy-ins looking to juice up our game.  We're talking big preflop raises, semi-bluffs for stacks, and calling down light.  Well, in the space of a couple of hours CD did juice up the game, but walked away with none of the money he put into the game.  To him, though, it was little more than chump change.  Thank you, come again!

By this point, it was early Friday morning, and I decided to stay and play short-handed to keep the game going.  Just another public service from your friendly neighborhood crAAKKer!  Speaking of crAAKKing, I only had one memorable big hand, but it was a doozy.  I was in the big blind, and there was a middle position raise by a LAG player.  A couple of callers, all standard for the table.  Then, the button 3-bet to ~$35.  I look down at Jh9h, and decide to call, as I figured there would be at least another two callers behind, and the implied odds for a big pot were high; plus, I had a huge stack and was looking to find big pots to play where I could leverage my chips.  The flop comes out Qh-Th-9s.  Donkey Kong!  I led out for about 1/3 pot, wanting to build a pot for my monster draw, looking to set up a play for stacks against a shorter stack, or a semi-bluff against a bigger stack.  There was one caller to the button, who moved in for about $250 total, so it was roughly $200 more for me to call.  I figured that the button likely had an overpair or at worst a set; the only credible flush draw he could have was AhKh, so I was either ahead with my pair (and blocking his flush draw), or behind but drawing to the world.  What I didn't want was an Ace-rag flush draw calling behind, so I pushed to clear the field, and the field obligingly folded.  My opponent showed QcQs for my worst fear—top set—so my two pair outs were, well, out.  The turn was a blank, the 7s.  But the river was the beautiful Kh for the straight flush!  So, in a bit of orientational irony, a gay guy used a straight flush to beat a straight guy's set of queens.  In addition to a nice pot, I got a $200 high hand jackpot bonus.  Not bad for a statistical variance box.

By early Friday morning, the regular 6/12 Omaha8 crew was straggling into the room.  I've played the game a few times, and the regulars are mostly semi-retired guys with a lot of money and free time.  They are a pretty friendly and entertaining bunch, prone to busting each other's chops in a good-natured way, and a few of them sat in our game waiting for the Omaha game to start.  I took one more big pot down when I turned the nut straight, but had to dodge two flush draws.  Unfortunately, I gave most of that pot back with an ill-timed bluff, so I decided to cash out up over three buy-ins.  It was my longest session of poker outside of IMOP in years.  Such sessions are usually -EV for me, but the unusual confluence of factors made this a perfect storm of profitability.

Given the theme of today's post, take a look at this interesting fellow who cashed out late Thursday night.   I have to say that this particular sartorial scenario was eye-popping:  aqua polo, pink shorts, rainbow colored braided belt, navy fitted baseball cap, and boat shoes.  Truly an outfit fit for a queen! 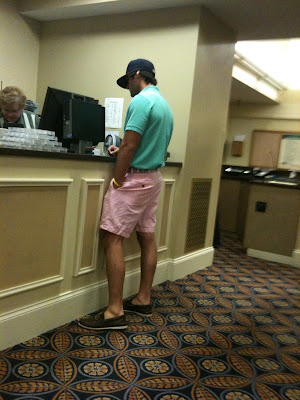