Earlier this month, I was in Vegas for a work conference, staying and playing at the Mirage. I met a charming older Asian woman, "M.L." who is a local and a regular player in the Mirage poker room. I played in several sessions of $1/$2 and $2/$5 NLHE with M.L., and toward the end of my final session, we were seated next to each other when a younger guy sat down at the table. M.L. nudged me and said, "He played here yesterday, lost over two thousand dollars. Plays crazy."

Sure enough, the young guy ("Y.G.") sat down and began to play nearly every hand, always raising or calling a raise preflop. Y.G. hit a few ridiculous hands to annoy some of the more serious players, but he promptly gave it all back with a series of loose calls, bad bluffs, and overplaying of marginal hands. Y.G. wasn't bothered by losing, and was actually joking around in a friendly way, making the game fun and entertaining. As Y.G. told the table multiple times, "Hey, I lost $13,000 at craps tonight. This is nothing!"

Y.G. probably pumped $1,500 or so into the game before leaving to meet up with his wife for an early breakfast. I wonder how awkward their breakfast chitchat was.

As Y.G. walked away, M.L. and I shared our regrets that Y.G. left the game. After exchanging a laugh, M.L. looked at me and said:

"You think he played crazy? Last month there were some guys here from Iowa. Now they played really crazy!"

I wonder who those crazy guys might have been. 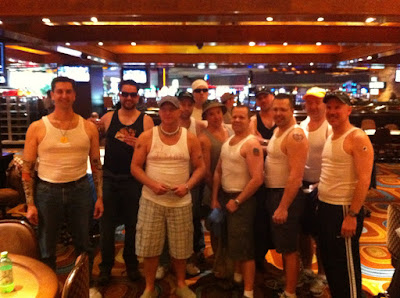 NOTE: For all the IMOP fans out there inquiring about the IMOP-VII trip report, Santa Claus is diligently working on it, though dark comedy is not his strong suit. Estimated delivery date is "sometime before Flag Day". So stay tuned, true believers!