I’m a very logical, analytical guy. I have a strong background in science and math, and I majored in philosophy in college. I also tutored Introduction to Logic for years, and taught my Symbolic Logic class for two weeks in our professor’s absence (in exchange for not having to take the final exam—score!). I even aced the two logic sections on the LSAT.

I relate all of this information so you appreciate that I am not a superstitious person. Indeed, I am about as logical/rational as anyone this side of Spock. So please accept this post as a statement of fact, not a silly superstition like those held by many of the irrational masses. 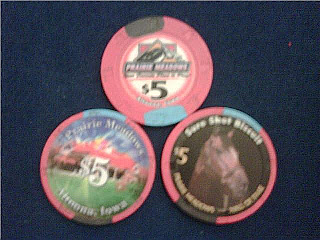 On the top you see the “generic” $5 chip. On the bottom left is the “rainbow” chip issued in commemoration of the addition of table games to the horse racing and slots several years ago. On the bottom right is the “Sure Shot Biscuit” chip issued to commemorate some random horse that may or may not have run a race at the Meadows ATM. These chips are referred to by regulars in the poker room as “Mafia chips” in homage to The Godfather. Now, the generic chips are easily the most prevalent, but the rainbow and Mafia chips are common enough that a typical stack of 20 red chips received from the cashier will usually include two or three each of those “special” chips.

So, you might ask, why should you care? Trust me—there is a correlation between proper use of these three kinds of chips and success at the poker tables. The rainbow chips are incredibly ugly, and their ugliness contributes to ugly play and ugly results. Thus, those chips should be sorted out and should be put in play first, ahead of all other chips. The rainbow chips are essentially the proletariat of red chips.

By contrast, the Mafia chips are extremely strong, containing the threat of serious harm to an opponent; the aristocracy of the red chips. Clearly, the more Mafia chips you hold, the more menacing you are to the table. Thus, your success is dependent on acquiring as many Mafia chips as possible, and then only putting them into play when absolutely necessary—generally only on an all-in. I always sort out my Mafia chips on my initial buy-in, and on every pot I win. Those Mafia chips are kept in a separate stack in the back of my overall stack, protected from exposure to the pot until their power is needed in a huge pot.

Often, if I'm running cold, I will reexamine my chip stacks, and I almost always find a rainbow chip that has snuck it's way into a stack, there to fester like an ugly infection.  Cleansing the rainbow chip from the stack almost always improves the health of my overall chip stack.

Scoff if you want, but if you sit down at my table at the Meadows ATM, you better have some serious "horsepower" if you find yourself all-in against me.

NOTE: I’m not the only person to observe the correlation between chips in your stack and success at the poker table. Now the Poker Grump obviously has a lot of irrational tics on display in his chip stacking rituals, but he intuitively recognizes that some part of his chip sorting/stacking routine is profitable. It will probably take months of therapy to convince him to give up his silly 10-chip stack size superstition.