As some of you may know, I bought the spousal unit a boxer puppy for our third anniversary this Fall. Berkeley has gone from being a cute little ball of fun to a mischievous 30 pound bundle of raw energy and excitement. Although Berk has changed our lives way more than I ever would’ve thought possible, I really can only barely remember life without him—which makes me sound scarily similar to my brother talking about his first child, my adorable niece Lucy.


This past Christmas, I was able to travel to Salt Lake City to visit Lucy (and her parents). Lucy is just shy of two years old, and is the early stages of the “walking and talking” phase. She may be the happiest, most lovable kid I’ve ever seen, constantly smiling, giggling, and hugging one of her parents, or one of her three dogs (two real and very tolerant dogs, and an oversized stuffed animal we gave her for her first birthday—who is also remarkably tolerant).

During my few days in Salt Lake City with Lucy, I was struck by the many similarities between parenting a toddler and raising a puppy. For example:

* First puppies and first kids get way too many toys, but they love them all.

* Puppies and toddlers love their owners/parents unquestionably—even when they get mad and pout, it rarely lasts longer than a few minutes.

* Puppies and toddlers have unlimited energy —until they suddenly crash for a nap, often in what appears to be an awkward position.

* Puppies and toddlers are at their most mischievous when they are quiet—too quiet. Nothing causes owners/parents more alarm than when their puppy/toddler is not in sight and can’t be heard.

* Anything the owner/parent is eating or drinking is automatically assumed to be better than whatever the puppy/child has been given to eat—and pouting and begging will ensue.

* Anything that falls to the floor is something that must be tasted, if not eaten outright.

* Owners and parents with their first puppy or kid take way too many photos and annoy their friends with way too much talk about their puppy/kid. (Exhibit A being this post!) 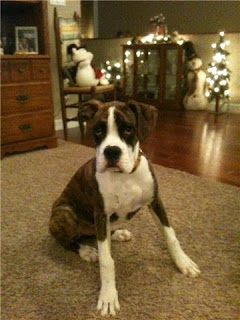 Of course, there is one major difference between puppies and toddlers—When you want to go play poker for a couple of hours, you can’t put your kid in a kennel! 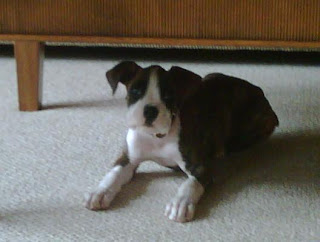