Poker with the Joker

One of my fellow Ironman of Poker (IMOP) running mates was in town last night, so we played a short session of 1/2 NLHE at the Meadows ATM while watching the Vikings-Saints NFC Championship game.* I had one of those frustrating sessions where I always seemed to be out of step—bluffing into the guys who can’t lay down middle pair, then failing to make a river bet against the guys who had a weak hand or missed draw. I wish I could say I was card dead, but I had AA three times (all small pot wins), KK three times (two small pot wins, one medium pot loss), QQ once (small pot win), and JJ/TT three times (all small pot losses). Of the four monster pots I was involved in, I won one with a great call, and lost the other three to draws that hit after the money (or the bulk of it) went in. I ended up down 1.5 buy-ins, but thankfully that was well-covered by my shrewd sports investments.

The poker game, although not profitable, did have a high #hilarityensues quotient. Early on I won a nice pot when I had AKo in the BB. I flop Broadway, but the board is all clubs and I don’t have one. There is a pot-size bet, and two of us call. Turn is 9d, small bet, followed by push all-in. I think a bit, and since I know this guy, I figure he has either the Kc or 9c, but is not made yet. I push over the top to get last player to fold, as I put him on a set or baby flush. He indeed shows 6c5c and mucks. Other guy in fact has KcQs. River is 6s, and I am off to a good start.


About this time my buddy, Barbie (@IMOPbarbie), arrives. Barbie’s style of play is best described as “demented-aggressive”. He is the “Joker” of poker players (the Jack Nicholson incarnation). Barbie’s pet hand is 63 (he calls it “the Spanish Inquisition”), but honestly, he’d raise with the proverbial Tarot card and napkin if he was bored (i.e., had folded before the river two hands in a row). On our last IMOP, he ran over two Scandis to the tune of at least $2K in profit, and left both rolled up in the fetal position sucking their thumbs after trying to figure out what had happened. He’s also the (former) owner of Fuzzy Puppy (a trained attack dog / card protector), who mysteriously disappeared at the last IMOP home game. Oh, and I drafted him (Barbie, not Fuzzy Puppy) for my team for this year’s IMOP. I mean, if the guy can pull off the epic “Meat Tank” prop bet (which required him to go all-in at a cash game at TI, then pull out and eat a leftover BBQ pork rib), why wouldn’t you want him on your team? 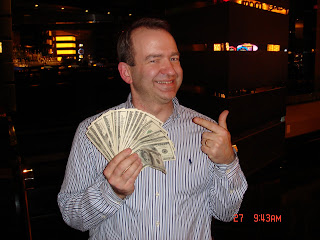 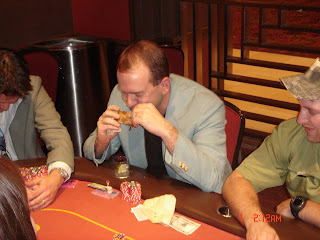 Anyway, I have a stack of ~$500 and I’m feeling good. Then, I run into a cooler. My nemesis at the table—let’s call him “Mr. Chow”—limps in MP. I find JsTs OTB, so I raise, and Mr. Chow calls along with a couple of others. Flop is a gorgeous Qs9s7h. Checks to me, so I bet around 3/4 pot, Mr. Chow calls, and another guy calls. Turn is the 8d—Donkey Kong! Checks to me, so I make a half pot bet. Mr. Chow calls. River is the 7s. Mr. Chow pushes for about half the pot. I hate it, but I make the call. Sure enough, I was rivered by … Ks6s. Ouch. I still have a nice stack, though, and I build it back up some when I run into Barbie. I end up stacking off to him with AK for TPTK when he flops bottom pair with J6o … and turns the J. Fun times. Rebuy!

I get some money back when I take a nice pot off of Uber-Nit by cracking his QQ with 9c8s—running clubs got there, of course. But, I then get KK OTB and have to give up on the turn when the board is four hearts and has the Ah to boot. In one of my favorite moments, I stack an uber-whiner when I call his flop all-in with QTs—I had a gutterball, backdoor flush draw, and it felt like my Q and T were both live overs. Sure enough, he has 99. The turn is the gin card—9h—making his set and my straight. Ahhh, much better!

At some point, I end up with one of the weirdest monster hands ever. I find KK again, raise to $12, get one caller. Flop is KQQ—not too bad, I guess. I slowplay it, and we go check-check. Turn is the case K—Donkey Kong! We go check-check again. River is … another Q! Now I’m hoping my opponent has AQ, since that would qualify us for the badbeat jackpot. I bet $20 and he instamucks. I end up winning a whopping $12 post-rake. Talk about bad beats …

In the meantime, Barbie is putting most of the table on tilt, showing down outrageous bluff after ridiculous play. He had people laying down two pair to his J-high or bottom pair over and over. At one point, Barbie four barrels at a final board that is Q-high with four clubs and a deuce. The river bet is $40ish, and the other guy (Mr. Chow) tanks. After a bit, Mr. Chow says, "I think we have the same hand," and shows AK with no club. Mr. Chow agonizes some more, and finally calls. Barbie says, "Good hand. Nice call." and rolls over J2o with no club. Barbie starts chattering about how he had to fire at the river, and what a good call Mr. Chow made, goes on and on. Barbie didn't realize he had won until the pot was hitting his stack! Hilarity definitely ensued. I think Barbie needs one of those pocket cheat cheet cards with poker hand rankings for IMOP.

Not long after, a guy next to Barbie bets $200 on the river into Mr. Chow’s cousin, for a monsterpotten of over $700. Mr. Chow’s cousin agonizes for over four minutes, muttering the entire time. Suddenly he stands up and points at Barbie and says, “Why couldn’t it be YOU?!? I call you!” He eventually folds two pair, and goes on mega-tilt when he’s shown a bluff with a busted flush draw. Whatever poker disease Barbie has, it’s clearly contagious.

Only six more weeks until Barbie and I hit Vegas for IMOP. I can’t wait to see if this is the year Barbie is finally assaulted by a crazed Euro-donk. One can only dream.