Note: The official IMOP trip report will be posted in randomly intermittent installments. Prior entries are: Part I and Part 2, Section 3(A), and Section 3-D (The Jacket Dinner). The author of the report is our cruise director, Santa Claus, with occasional editing by yours truly. Enjoy!

The Ironmen begin to slowly shake off the fog of the Ugly Jacket night and assemble in the Venetian poker room for some Euro-tilting cash game action. Santa gets seated at a table where Barbie and Fat Jesus are already holding court. At one point during their verbal jousting, this hand breaks out: Preflop raise and both are in the hand. Barbie has 64s and flop comes 224. Fat Jesus bets, Barbie calls as Fat Jesus says, “You’re behind”. Barbie’s reply is, “Yes, until I hit my four right here, “and sure enough a four turns. They get it all in and Fat Jesus turns over pocket ducks for quads and takes a big bite out of Barbie. Nothing better than drawing dead and getting there. No mercy!

Grange and River Joe pick up Santa and they get breakfast after standing in the longest line in the world at Bally’s café. As they walk over to Aria to register for the last tournament of the trip, they are passing through Cosmopolitan and they hear giggling. Santa turns and sees Fat Jesus, Colt and Barbie laughing their asses off, drinking cosmopolitans and playing Sex In the City slots. Their waitress is shaking her head as she watches them guzzle the fruity drinks out of martini glasses while shouting, “I hit the shoe shopping jackpot for $300 on pink pumps!” They should definitely have their Man Cards revoked. 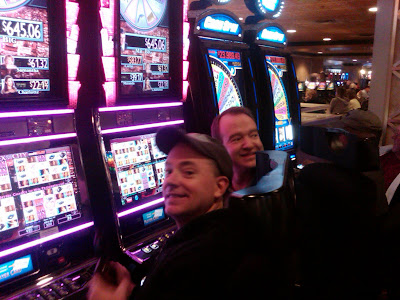 Colt and Barbie sip Blood Orange Cosmos and hit up the
Sex & the City slots at the Cosmopolitan.
Everyone makes it to Aria alive. Fat Jesus (who has an uber-generic real name) breaks the computer in the Aria cashier cage when they have to look up his players' club card by name; the computer freezes up and has to be rebooted. This leads to Grange and Fat Jesus prop betting on the over/under for other Ironmen names in the system; Grange is tilted when he takes the under on his and two other uncommon Ironman names and discovers they all have a lot of dopplegangers (perhaps some of whom can actually play poker and/or get better comps). While registering for the tourney, a near fight breaks out in Ivey’s room when Shawn “Sheiky” Sheikhan goes bananas on some guy and Todd Brunson calls security. Great, our closest brush with fame is a world famous douche bag. *sigh*

After nearly bubbling for the third time in four tourneys, Lucky not only cashes but takes home the cash in the largest tourney we entered (over 100 degens). He becomes friends with Yaks as they help him with a timely double up, then his Yaks take out the table bully that refused to chop. The players (including Barbie) finally decide to chop when it is down to four. Lucky has the chip lead, and gets the largest share and is declared the winner of that event.

River Joe had busted earlier and jumped into a cash game. In one hand, he gets heads up with an old short stacked Asian (OSSA) where he flops top two, on an OESD board. OSSA sits there and ponders on what to do. Joe asks, “You have straight draw don’t you.” Finally OSSA answers yes. Joe then says, “You should go all-in, you’re getting the right value.” OSSA tanks, and eventually gets it all-in which Joe calls. You guessed it, OSSA gets there on river. Thank you, lessons are FREE, don’t forget to tip your dealer … rack please.

After having busted out earlier, Bonnie and Fat Jesus headed over to the sports book at the V. At one point Fat Jesus had placed a sports bet along with Bonnie, and had left the VSB to take a nap. Thinking the team he bet on had to win by 3, he watched the end of the game alone in his room rooting for the overtime and cheering when it happened. Then he decided to watch the end of the game at the VSB with the others, still thinking he needed to win by three. Fat Jesus was disappointed when his team and he both “lost” but Bonnie sees his disappointment and says “you know we won, don't you?” laughing at his ignorance.

On their way out of Aria, Mr. Chow, Barbie and Colt decide to see if the blackjack tables are still hot for them. While Colt is sticking to a range of $20-$40 wagers the other two proceed to randomly toss out $100+ while splitting 3’s or 5’s against a dealer 8-10. Gentleman stops by with his 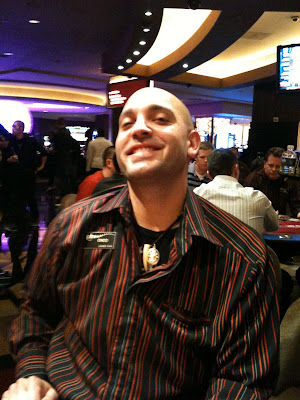 Yo dawg! Chico from Planet Hollywood, winner
of the IMOP Most Entertaining Poker Dealer award.

One hand, she called Mr. Chow and Barbie all-in on the flop of 9-9-4 with AAxx double-suited, but of course both our boys held a 9, and their hands held up to chop the old lady’s money. Crabby bitched to her partner with a ton of profanity about the suckout. Barbie said something innocuous about a tough beat, and she hissed at him, “Don’t you f-ing talk to me!” Crabby also refused to let any player offer her chips for her bills; she made a point of only letting the dealer make change.

This was the scene of Grange’s best run good of a trip already filled with running good. He won a monsterpotten with QcJcJdTd, flopping the OESFD on a board of 9d-8d-x. He got it all in against one of the local "pros" who was trying to run the game. They agreed to run it twice. First card off: 7d! Yahtzee! Grange is now pissed that he agreed to run it twice. No worries. Second board runs out: Blank, Qd! Donkey Kong! Luckbox hits both ends of the straight flush and makes the dealer hold off raking the muck while asking Fat Jesus (also spectating with Santa) to take a photo of it. His competitors were not pleased. Within the next half hour, he also hit middle set with 6s (666, baby!) on a board of Q-6-5, and hit two full houses running it twice, for another monsterpotten and a bonus of sending Crabby off on mega-tilt to rip the heads off bunnies (sorry, bunnies). That little bit of run good was also run bad, however, as the straight flushes and monsterpotten occurred a couple of hours after the official cutoff for IMOP points (which includes points for high hands and large pots). Grange would up with what he calls his  "Tag Heuer PLG Watch" after converting some of the profits from his best Vegas outing in 2-3 years (Fat Jesus—a Tag Heuer aficianado—should really get a commission for his superb sales work at the City Center Tag Heuer shop). 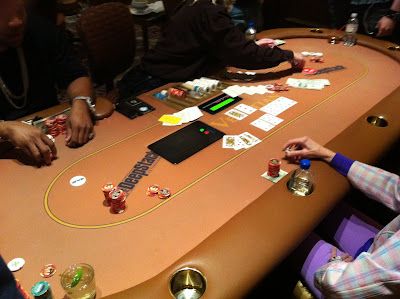 The board from Grange's double straight flush hand at the Venetian.
Note Grange's Patron-rocks-lime anti-scurvy beverage (left), as well as
Crabby and her Amazing Technicolor Eyesore (right).
As the guys walked from the poker room over to the Grand Luxe for the traditional IMOP wrap up, they come across Barbie, Fat Jesus and River Joe searching for one last fourball opportunity. They somehow managed to win yet again. Ca-caw!

After the usual voodoo scorekeeping, Barbie and his miracle table game run managed to squeeze out a repeat victory and rare back-to-back IMOP championship. Hopefully he saves some of his winnings to pay for all of breakfast next year… 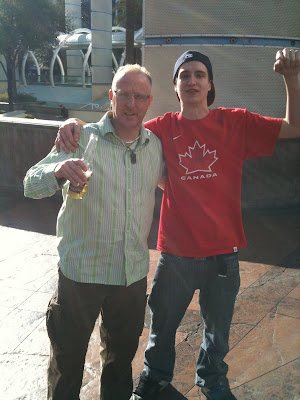 Bonnie engages in international drinking
diplomacy in this retrospective pic from IMOP-V.