A couple of nights ago, fellow Ironman Barbie texted me to tempt me into a session at the Meadows ATM.  Regrettably, I had actual work to do, and couldn't get away on short notice.  However, hilarity ensued as Barbie dusted off his uber-maniac schtick and tried to roll the midweek nits.  I knew I was missing out on a fun session when Barbie twittered this gem:

At Prairie Meadows but no Grange95. Table just tried to pay for Fred's straddle so I could post a pic. #floordenialoffun

Now, for those of you from outside Iowa, Fred is a legend in the Iowa poker scene.  Fred is a semi-retired businessman who has been fairly successful in life.  He enjoys playing poker, and is a regular at the Meadows ATM, and gets to other Iowa and Midwestern poker rooms on occasion.  Fred is a good guy, generally friendly and talkative at the table, and never mean to anyone.  Fred is also an Uber-Nit. He only plays solid hands (usually pocket pairs and big Aces), and will fold his small blind to a limp.  Fred also has a habit of overbetting his premium hands, which leads to some legendary blowups when he suffers the inevitable suckout or bad beat.  Fred is known to talk to himself while wandering the halls after a bad beat, and curse up a blue streak when he gets snapped off.  He has also perfected the perfect nit play of hitting the 2/5 NL game and waiting to win one or two big pots, then running off to a 1/2 NL game where he is forced to squirrel away his profits and only risk a small stack the rest of the night.  If you want to needle Fred a bit, ask him how to play AQs preflop—Fred once folded that hand to a reraise, only to discover he would have hit a royal flush against a player with quads, qualifying for the fairly sizable bad beat jackpot.  Ahh, fun times!

So anyway, I had a good chuckle at the crazy notion of Fred straddling, even if the other players were putting up the money.  It reminded me of a night at Treasure Island (excuse me, "TI") during IMOP-IV when I prop bet our resident nit, JB-DIA, to straddle (the nickname stands for "diamonds in azz" referring to his ability to turn coal into diamonds with his tight play).  Apparently the influence of a half dozen caipirhanas was sufficient to loosen him up, and he not only straddled, but also raised his straddle to $45!  Turns out he had 98 sooooted, and won a big pot when he flopped two pair.  Those nutty nits!

However, Barbie wasn't finished.  After the floor put the kibosh on the table straddling for Fred, apparently he succumbed to the peer pressure himself:

Yes, chaos at PM as Fred straddles with his own money... @grange95 missed it. #catsanddogsetcetc.. http://twitgoo.com/veujq

And with the Tweet was this photographic evidence of a nit in the wild, straddling: 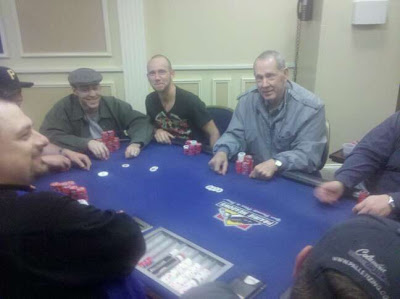 Yessiree, right there in the gray jacket is none other than Fred, with $4 in the pot ... without having seen his cards!  Inconceivable!  Did hell freeze over?

Dr. Peter Venkman:  This city is headed for a disaster of biblical proportions.

Mayor:  What do you mean, "biblical"?

Dr Ray Stantz:  Fire and brimstone coming down from the skies! Rivers and seas boiling!

Winston Zeddemore:  The dead rising from the grave!

Of course, the entire scene is most likely a hoax, like the jackalope or the moon landings.  Still, it's fun to think a nit might someday, somewhere, be found straddling ... 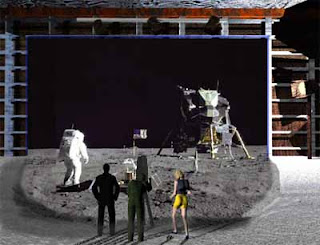 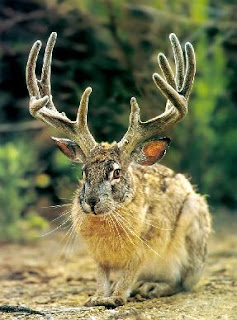 ADDENDUM (14 May 2010):  A commenter pointed out that the picture above left is not a true jackalope, but rather is a "rabeer" (cross between a rabbit and a deer).  So, below is a picture of a jackalope: