MGM Slides Closer to the Abyss

I discussed the Aria financial picture a month ago, when MGM issued an advisory warning of projected poor first quarter financial results, primarily related to the City Center project. None of the final numbers reported last week are significantly different than the advisory numbers.  However, it appears that Aria's gambling revenues are fairly solid, at $75.9 million.  But the occupancy issue at Aria (a mere 63%) remains a serious issue going forward:

"That side takes longer to build unless you just want to give away the store and be highly promotional and lower the room rates," Murren said. "That would be, we believe, very damaging long term, and unnecessary.

"We fortunately have the luxury of time to allow Aria and CityCenter to build in a graceful, logical fashion," he said. "We're not in a crisis mode where we need a certain amount of money on a daily basis or a weekly basis because of some financial covenant."

Murren said Aria's bookings are improving for the rest of the year for conferences, which generate higher room rates than leisure travel. He expects that to help occupancy.

The problem with Murren's statement is that, at least to my eye, Aria's marketing blitz the past month or so has been directed to individual gamblers, via emails to MGM slot club members and internet ads targeted to gaming related websites.  This is hardly the higher-revenue conference-attending crowd that Murren claims is vital to Aria's survival.  More to the point, the email and online ads are for greatly reduced rates, usually around $109 for weekdays, $139 on weekends.  This is certain to undercut Aria's intended price point which is meant to compete with the $200+ average daily rates (ADR) of Bellagio, Wynn/Encore, and Venetian/Palazzo.

Also of note is that MGM failed to release a Revenue Per Available Room (REVPAR) figure for Aria, a standard metric for measuring revenue in the casino business.  MGM provided REVPAR data for all of its other properties.  As a reference point, Bellagio had an ADR of $199 and a REVPAR of $181 for the quarter, which appears a fairly standard ratio for the higher end Strip properties—the ADR/REVPAR figures for Venetian ($202/$180), Palazzo ($214/$201), and Wynn/Encore ($203/$181) are in the same general range as Bellagio.  Presumably, Aria's REVPAR is embarassingly low, or it would have been reported.

While digging through some older Las Vegas Sands financial statements, I discovered that the Palazzo, which opened in December 2007, had first quarter 2008 occupancy of 79.1%, ADR of $244, and REVPAR of $193.  I tried to find first quarter data for Encore following its opening in December 2008, but Wynn Resorts does not separate out the two Vegas properties in its financial reports.  However, the joint Wynn/Encore figures for that first quarter of 2009 reflect an occupancy rate of 89.5%, ADR of $222, and REVPAR of $199, almost identical to Palazzo's performance that same period, and slightly ahead of Venetian.  Given that Aria is running 16 points behind Palazzo's post-opening first quarter occupancy rate, and has a substantially lower ADR ($194), the REVPAR for Aria seems highly likely to fall below $150.  If so, those results have to be greatly disappointing for MGM.

While looking through the financial statements, I put together a few spreadsheets analyzing past year trends, as well as comparing trends from the peak market of 2007 through present (you can review the spreadsheets here).  I also put together some interesting charts from the financial data.  Unfortunately, the Harrah's Entertainment financial data I was able to locate was not particularly helpful, as it didn't break the data out in as detailed a fashion as the other major Strip players.  In fact, for Harrah's, occupancy rates, ADR, and REVPAR are not reported, nor are most categories of revenues and expenses (Harrah's reports casino revenue, and lumps all other revenue streams into an "other" category).  But, let's take a quick look at what the data show (you can click on any chart for an enlarged version).

These first two charts show the trend by revenue category for MGM Mirage's Strip properties, comparing first quarters from 2007-2010.  Essentially, MGM's net revenues are down 30%-48% in all categories (see the spreadsheets for detailed breakdown). 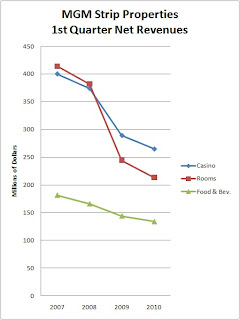 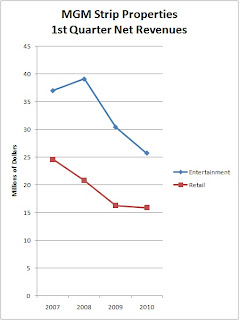 The next chart compares ADR and REVPAR data for MGM Mirage Strip properties, Wynn/Encore (combined), and the Venetian (the Palazzo data is similar, and was omitted to make the chart clearer).  Harrah's does not report ADR and REVPAR figures, but their financial statements indicate that both statistics continued to decline; I suspect their figures would fall near or below the MGM Mirage line given their stable of "value" oriented resorts.  In fairness to MGM, the Bellagio's ADR/REVPAR stats would be quite close to the Venetian and Wynn numbers.  The problem is that MGM needs Aria to be another Bellagio (or better), while it seems more likely to perform as another Mandalay Bay or Mirage. 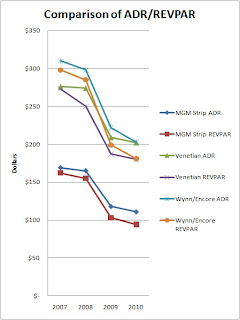 The final four charts compare four categories of revenues for MGM Mirage Strip properties, Las Vegas Sands, and Wynn Resorts.  Harrah's Entertainment has been added into the chart for casino revenue, the only category where reliable data could be found.  For the retail/entertainment category, the two categories were combined to enable apples to apples comparisons across the different reporting methods; however, the general ratio of retail to entertainment revenues is roughly 60/40.  Given MGM Mirage's stranglehold on the Cirque du Soleil shows, as well as any number of other shows, the poor performance in the entertainment revenue category is rather curious. 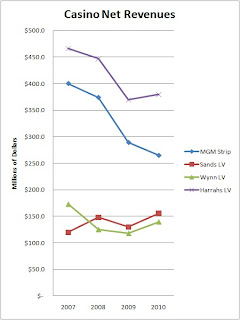 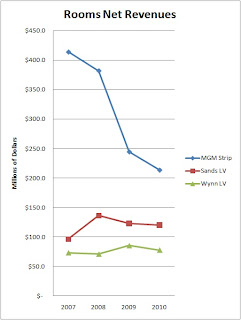 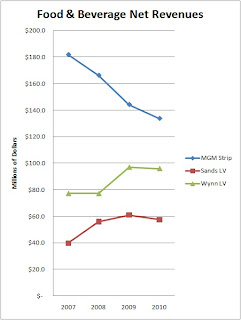 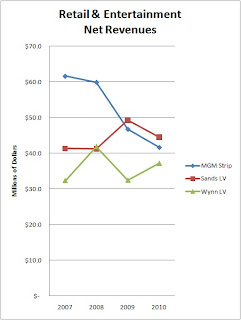 From the data, it looks like MGM is still struggling, with the revenue decreases flattening out, but still continuing to decline across all categories.  Harrah's is showing an uptick in casino revenues, but the financial statements indicate that revenues overall are down 4.4%; with non-casino revenues comprising about 2/3 of overall revenues, it's apparent that non-casino revenues declined at a greater rate than 4.4%.  For Sands Las Vegas and Wynn Resorts, however, it looks like they have hit bottom and are starting to climb back out of their recent financial hole, with Sands Las Vegas doing better than Wynn Resorts.  One interesting side note is that Sands Las Vegas got more bang for their buck with Palazzo (opening December 2007) than Wynn Resorts did with Encore (opening December 2008).

One interesting piece of information I came across in the Sands Las Vegas and Wynn Resorts financial statements was the slot "hold" rate.  Sands Las Vegas routinely reports a slots hold of 7.0%-7.8% (increased from 6% in 2008), while Wynn Resorts reports a lower hold of 4.5%-5.5%.  So, if you're looking for the best bang for your buck, at least at the ritzy casinos, you may want to make the walk over to Wynn or Encore instead of sticking around the Palazzo or Venetian.