One of the more fascinating modern scientific discoveries is the existence of black holes.  Black holes are superdense objects created from the gravitational collapse of sufficiently large stars (at least three times the mass of our sun).  Essentially, at some point, the star's fusion process runs out of the fuel necessary to maintain the thermal energy required to resist the gravitational force of its remaining mass.  The star then collapses back in on itself into a core known as a gravitational singularity, where the mass of the star essentially becomes infinitely dense.  Around the singularity is an event horizon, which marks the point where any particle or wave is unable to escape the gravitational field of the black hole.  Thus, the black hole is "black" because no light (including any form of electromagnetic radiation) can escape from inside the event horizon. 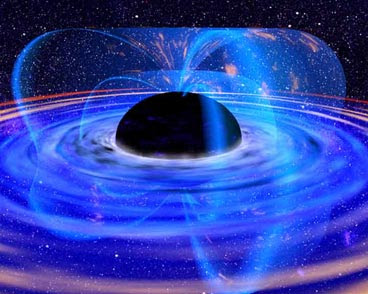 A significant implication is that it is impossible to ever directly observe a black hole from outside the event horizon.*  That's right, you will never see a black hole.  So, how does one observe a black hole?  Thankfully, due to the nature of black holes, scientists have developed several effective methods of observing black holes indirectly, essentially deducing their presence and properties by the black hole's effect on other, observable phenomena.  Some of these techniques include:

So, what do black holes have to do with poker?  Well, other than the obvious analogy that poker seems to suck all of the interpersonal skills and human decency out of the souls of some players ...

Black holes came to mind during my last live poker session because of the concept of indirect detection.  I sat down at a 2/5 NLHE table, and there were a few regulars as well as a few players I did not know (which is rather unusual for the Meadows ATM).  Two of the regulars are players whose games I respect.  One is rather loose preflop, the other is rather tight, but both players are solid postflop players, aggressive when possible, cautious when necessary, but rarely putting chips into the pot without a good reason.  Early on, I was fairly card dead, so I wasn't playing a lot of hands.  However, by watching the two players I did know, I got a feel for the table.  Two of the newbies could be bullied.  One was a calling station.  Most importantly, there was one newbie with a bigger stack who was given respect by the players I knew.  When this newbie played a hand, the regulars showed respect to his bets and raises, and never made moves on him.  Clearly, then, two players who I respected felt that this newbie was a solid player and stayed out of his way.

So, about an hour into the session, I found AQ on the button.  Limped to me, I made a standard raise, solid new guy was the only caller in early position.  Flop was A-K-Q rainbow.  Yahtzee!  New guy checked, I bet 1/2 pot, new guy check-raised for 3x my bet, his standard raise.  Now, there are some players who check-raise that flop with any two cards, hoping I have a pocket pair under the board.  But given that the regulars respected him, I was worried about the check-raise.  A hand that limp-called preflop out of position, then check-raised the flop could easily be something like AK or QQ, possibly JTs.  There weren't many hands a tight player would play that way that I could beat.  I finally laid it down, deciding there were softer spots at the table.  Though I rarely do it, I mucked face up, and the newbie smiled and obligingly showed AK.

So, even if you don't have personal history with a player, you can still get a read on him from observing how he interacts with other players, and how other players react to him.  Also, a cool way to deal with table d-bags is to throw them into a black hole.