The past few months, "Rush Poker" on Full Tilt Poker has electrified the online poker world.  The concept is simple—see a hand you don't want to play, hit "fold" and be instantly whisked to another table where another hand is already waiting your attention.  The genius of Rush Poker is it allows masochistic nits to click-click-click until they find Aces or Kings, so they can overbet them, get them cracked, and go on super monkey tilt ten times as frequently as regular poker.  By all accounts, Rush Poker is apparently profitable and addictive.

Friday night, I played a session of poker at the Meadows ATM that can only be described as the absolute antithesis of Rush Poker—Molasses Poker, if you will.  My table had mostly players with short stacks of $50-$200, and the play was nitty-passive.  Given the nature of play, most speculative type hands were off limits, and I was reduced to waiting for so-called "premium hands"; there would be few "crAAKKing" opportunities at this game.

Now, just in case the short stacks weren't enough to suck the joy out of the game, the players stepped up to assist.  The table had the biggest collection of players who either couldn't keep track of the action or who had to think deeply about every routine decision.  I doubt we got in more than 20 hands per hour.  Trust me, when you're waiting for playable hands, that kind of table is almost as annoying as being stuck behind an Amish or Mennonnite buggy in a lengthy no-passing zone. 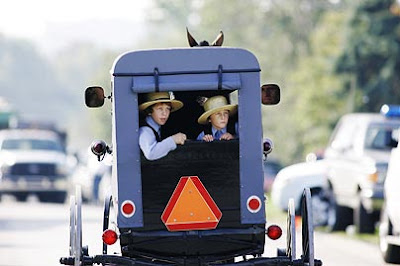 "Is this Vegas?"  "No, it's Iowa."
One of the worst slowpokes was a young kid who was obviously rather new to live poker.  He had trouble keeping track of the action, in part because he was wearing headphones, and in part because there wasn't a flashing light or alarm sound when it was his turn to act.  I would've cut him some slack, but he also was one of the three or four guys who liked to do the dance of the seven veils at showdown, utilizing the incredibly obnoxious "20 Questions" routine with the occasional change-up to the "One Card Monte" trick.  It was so bad, the dealers on at least three occasions had to tell the guy to roll over his second card so they could ship him the pot.  Although I understand the desire to be helpful to a newbie, at some point the easiest way to teach a lesson is to simply award the pot to the player with both hole cards showing.  I guarantee you it would cure the problem instantly.

Unfortunately, the most obnoxious etiquette breach of the evening occurred on my last hand.  Although I had built up a $250 profit early with a couple of sets, I had given a lot of it back when I ran trip tens into a U-boat, and had two flushes chase and hit against my two pair and a straight. On the final hand, I played A8 from the button for a limp in a straddled pot.  I flopped top pair with the 8 on a rainbow board.  It checked to me, and I made a small bet, getting a couple of calls.  The turn was an Ace, giving me top two pair, and putting a spade flush draw on board.  I bet 2/3 pot, and got one call.  The river was a baby card that completed the backdoor flush.  My opponent checked to me, and I pushed for his remaining stack, around $60.  My villain sighed and assumed this pose for the next 30 seconds: 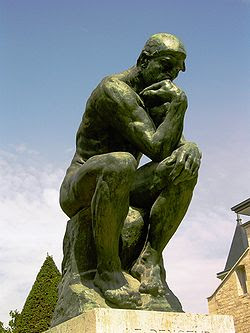 Auguste Rodin makes the taserlist!
After thinking for a while, then rechecking his cards and thinking some more, my opponent made the call.  I announced "top two", my opponent paused for a moment, then dramatically threw over KsJs for the stone cold nuts!  That's right, not only was I slowrolled, I was slowcalled.  I can understand doing some Hollywooding when there is action remaining, but here, the only thing my opponent had to decide was whether to call with the nuts—I would actually have preferred the "snap call fist pump" with some Hevad Khan theatrics to the slowcall routine.  I made a snarky comment—"Tough decision to call?"—then decided to head home even though I was playing well enough I would normally have stayed a few more hours.
Of course, on the drive home I was pulled over by one of West Des Moines' finest just as I was turning into my development.  The officer claimed my brake lights were not working, but after he looked me over and glanced at my license, he verified that, much to his astonishment, my lights were working just fine and sent me on my way.  Nice try fishing for a DUI bust there, bucko.  Although the incident took five minutes at most, it was just the pickle on the sh*t sandwich that was my evening. I took that as an omen not to play poker Saturday night, and instead caught up on some TiVo'd shows.  Yup, my life is one thrill after another.

Incidentally, the reigning world champion for most offensive slowcall has to remain this one (hat tip to Pokerati via the Grump):
Posted by Grange95 at 5/10/2010 11:18:00 PM