Before anyone protests, yes, I know this is Saturday.  However, because this is a holiday weekend, Saturday is the new Friday. Plus, it's my blog, and you should already expect random absurdity.  If foolish inconsistencies bother you, go read the Poker Grump.


* * * * *
As a service to my male readers who have an interest in women of a certain age (or female readers of that age who are "on the prowl"), it appears there is now a website devoted to helping in the hunt:  CougarLife.com.  However, it is critically important to distinguish between cougars and pit bulls.  For some reason, this news (the cougar site, not the pit bull bite) puts me in the mood to watch Ocean's 13 ...


* * * * *
This week, I learned about "crash blossoms", a term for headlines that are phrased in a manner that lead the reader to draw the wrong conclusion about the article following.  My favorite example:

* * * * *
In keeping with this blog's purely educational purposes (trying to qualify as a tax-deductible organization here), I wanted to pass along this article about five civil wars that occurred in the United States that have been relegated to obscurity.  Making the list was the Honey War, fought between Iowa and Missouri in 1839.  Initially I suspected a hoax, but a little research reveals there was an actual militia conflict over the border between Missouri and the then-Territory of Iowa.  The history reported by the Iowa National Guard even details the weapons used, which included "a plough coulter [slung] over [the] shoulder by means of a log chain" and "an old-fashioned sausage stuffer".  Common mistake, bringing a sausage stuffer to a gun fight ...


* * * * *
Speaking of sausage stuffers (sorry, couldn't resist), the French Open is underway which offers a variety of attractive athletes doing ... something.  Gosh those tennis players are shiny! 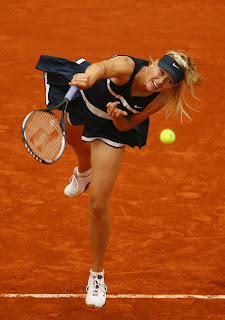 
* * * * *
On a more serious note, and in keeping with this post's wildlife theme (yeah, there is a theme, at least if I say there is a theme), let me recommend a new book by National Geographic photographer Joel Sartore: 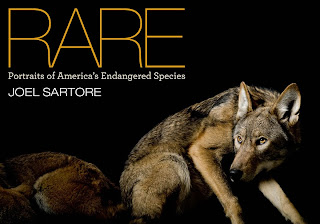 Rare: Portraits of America's Endangered Species
Neatorama.com has an excellent write-up on the book, but the short story is that the book was a project to photograph some of America's endangered species and provide some information on each species' background.  In the preview on Neatorama.com, there are a number of sample pictures from the book.  Although there are a number of traditional "endangered animal superstars" (e.g., the black-footed ferret and the California Condor), I was intrigued by the Iowa Pleistocene Snail:


This Ice Age snail was known only in fossils until examples were discovered alive in 1972. The species persists on steep slopes in Iowa and Illinois where cracks in the limestone act as cool-air vents. Naturally air-conditioned at 15° to 50°F, these micro-habitats mimic Pleistocene conditions, but logging and erosion threaten change.

This is a true relict species, left over from an age when glaciers dominated North America. Today it can survive only in vents in the sides of a few hills in the Midwest. Hot air literally kills it, so moving these animals, even for a few minutes, is out of the question. The entire photo set up consisted of a flash, a macro lens, and a piece of white plastic stuck in a cracked rock. That they're the size of a pencil lead adds to the fun of trying to photograph them. - J.S.

Here's the video from Joel Sartore's website promoting his book, with some amusing moments, plus an adorable hedgehog (the video may take a few minutes to load, but it's worth the wait):


RARE from Joel Sartore on Vimeo.
* * * * *
"Is that a seahorse in your nose or are you just happy to see me?"  To get the full story on these and other disturbing, absurd, hilarious, or downright bizarre ads, check out Copyranter. 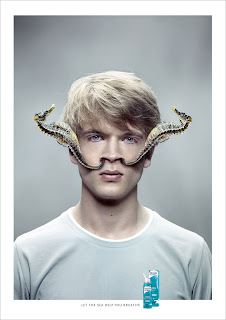 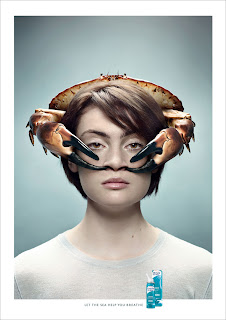 * * * * *
Over at "While Drinking, I ...", StB recently solicited reader suggestions for his next drinking mixed tape, errr, CD.  Because he requested an off the beaten track country drinking song, I suggested "Drinkin' My Baby Goodbye" (song / lyrics) by the Charlie Daniels Band (more famous for "The Devil Went Down to Georgia").  Now, this song is near and dear to me for two reasons.  First, it's my go-to karaoke song for the extremely rare situations where I am forced to "sing" publicly (my voice is built for public speaking; my singing ability ranges from "terrible" to "disastrous").  Second, the song ends on the line, "If it takes all night, I'm gonna do it right, I'm gonna sit here 'til I can't see!" which always reminds me of my college buddy Todd's mantra for going out:  "We're going to drink 'til we can't see!"  The last time I heard that phrase, I was in Chicago with Todd, buddy Santa Claus, and several of Todd's fraternity brothers, doing shots of Jagermeister while "Getting Jiggy Wit It" blared from the speakers on the roof of some random apartment building we had stopped at for some irrelevant reason.  At some point in the evening's festivities, we ended up in a dive bar on Rush Street, playing Golden Tee with a pimp who took the occasional break to negotiate "dates" for his "lady friends".  The rest of the night is a bit of a haze, though I do recall a very late night trip to Weiner Circle for a hot dog with a side of foul language abuse, followed by a cab ride with Todd yelling "Faster!" and "Giddyup!" at the driver.  That night (actually the next morning) officially marked the moment when I realized that I—and my liver—were no longer 21.

Anyway, the video StB posted for Charlie Daniels was pretty lame, so I took it upon myself to find a better video.  Now, I have the following sight seared into my retinas, so obviously I am required to subject y'all to the same optical torture.  Let's just say the video is what might result when a Broadway choreographer goes on an absinthe-drinking binge, and tries to create Kung Fu Hustle II:  Hoedown on Brokeback Mountain.  Enjoy!


Johnny Cash is line-spinning in his grave.
For my readers who have never enjoyed the glorious martial-arts-meets-Michael-Jackson-video masterpiece that is Kung Fu Hustle, here's a little taste of what you've been missing:


All the cool kids join the Axe Gang!