The City Center Pit of Despair

Count Rugen:  Ah. Are you coming down into the pit? Westley's got his strength back. I'm starting him on the machine tonight.

Prince Humperdinck:  Tyrone, you know how much I love watching you work, but I've got my country's 500th anniversary to plan, my wedding to arrange, my wife to murder, and Guilder to frame for it; I'm swamped.

In the movie The Princess Bride, the villain Count Rugen tortures the hero Westley in the "Pit of Despair" with a machine that sucks out a person's remaining years of life, causing them to scream in horrendous anguish.  The screeching and wailing you heard yesterday likely was from investors in MGM Grand-Mirage (MGM) as its stock price fell on MGM's reports of dismal first quarter earnings projections, as the CityCenter project is quite literally sucking out all of MGM's current and future profits.

The numbers for Aria are shockingly bad:  a $66 million operating loss ($54 million of which is depreciation), and a pathetic 63% occupancy rate.  As I wrote in a recent review of City Center, the Aria casino seems designed to eschew luring in walk-by customers from the Strip in favor of trapping its hotel guests inside.  This strategy obviously won't be successful if you aren't getting any hotel guests.

Even worse news for City Center comes from their residential condo units.  According to an article by Howard Stutz at the Las Vegas Review-Journal:
Let's unpack this data a bit.  Getting $24 million in bonus cash from forfeited deposits sounds great—for this quarter.  I don't know how much of a deposit was required per condo, but those canceled sales have to affect hundreds of condos, and City Center won't be getting any revenue from those condos in the near future.  Based on the closings reported, each condo is averaging around $1.5 million, so the canceled condos translate into hundreds of millions in deferred revenues that probably won't be recouped for more than a year, if not significantly longer.  Now, City Center will save some money in the short term by not having to finish all of those condos, but selling those condos was a key part of their financing plan.  But at least they've closed on a whopping 25 out of 2,400 condos, so they've got that going for them, which is nice.  Even assuming another couple of hundred condos have been sold and will close later in the year, it looks like City Center still will have a glut of unsold condos to carry into the next few years—if they have the cash to do so.

Speaking of cash, digging into the financial statements themselves is kind of interesting, in a Discovery Channel show about vultures and dung beetles sort of way.  First, the gaming industry has definitely not recovered from the recession:

Total casino revenue is expected to be approximately 5% lower than the prior year, with slots revenue down approximately 1% for the quarter. The Company's table games volume, excluding baccarat, was down 4% in the quarter, but baccarat volume was up 17% compared to the prior year quarter. The overall table games hold percentage was lower in 2010 than the prior year quarter; in the current year first quarter the hold percentage was near the midpoint of the Company's normal 18% to 22%, while in the 2009 quarter it was at the top end of the range.

The increase in baccarat volume likely means marketing efforts have been focused on Asian high-rollers, something all the major casinos probably have been making a priority now that the great American home equity rave is over.  Also, the MGM house has been experiencing a little negative variance on the table games, meaning we can all expect more 6/5 payout, eight deck, continual shuffle blackjack tables.  Poker isn't broken out separately from the pit games, but I suspect poker is holding its own; poker players might drop down stakes in a recession, but the volume of games seems about standard on my recent trips, and rake is more about volume than game size.  Still, it wouldn't surprise me if the MGM family took a look at Harrah's and made a move to $5 maximum rake.

The other interesting information is the breakdown of operating income by casino.  Now, the financial statements also show a breakdown of earnings before interest, taxes, depreciation, and amortization (EBITDA), which is a useful and meaningful figure for certain accounting purposes.  But, let's focus on the operating income portion of earnings, which is the actual hard cash coming in the door, and compare it to the first quarter of 2009 (all figures in thousands of dollars): 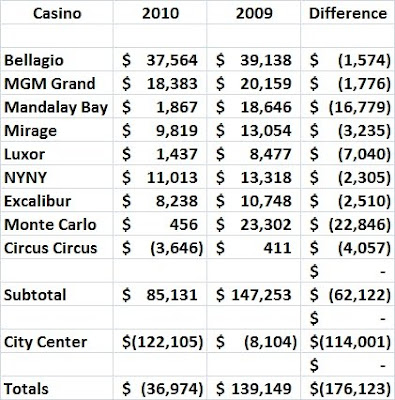 It seems that business is down across the board for the MGM family of Strip casinos, but the drag of City Center is quite obvious.  Also, although the financial strength of previous MGM family flagship Bellagio is no surprise, the strong performance of New York New York relative to its MGM siblings was a major surprise.  The sharp drop off for Mandalay Bay is puzzling, although that might be related to reduced numbers of conventions (Mandalay Bay has a large convention area).  The Monte Carlo numbers are almost certainly skewed by the fire last year; insurance proceeds for business interruption were discussed in the financial statements, but they seem to be accounted for separate from operating income.*  It's also pretty obvious that Circus Circus should be imploded, except what could be done with that crappy property in the current economy?

No matter how you slice it, City Center is appearing more and more like a boondoggle.  Maybe MGM was part of a covert government plan to bankrupt Dubai by sucking them into this money pit ... Ya never know!

* ADDENDUM (18 April 2010):  Looking back at the financial statements, the Monte Carlo fire insurance proceeds were accounted for as follows: