Mr. Filet Is Back!

There are two kinds of people—Greeks, and everyone else who wish they was Greek.

This is not one of those ham-handed April Fools' Day blogs.  How could I joke about something as serious as Mr. Filet?

For those of you not from Des Moines, Mr. Filet is a landmark downtown diner, tucked under the parking garage at 7th & High Streets, a convenient two block walk from my office, and near most of the major buildings occupied by Principal Financial Group.  This is your basic greasy spoon diner, serving omelettes, bacon & eggs, and pancakes in the morning, then switching to burgers, gyros, and cheap steaks for lunch (my favorite lunch item is the herb-marinated grilled pork chop; thick, juicy, tasty, and a steal when you throw in a baked potato and side salad for under $7).  The decor is basic, with an semi-open kitchen and a bunch of tables and chairs in use since the 1970s (or earlier).  You get plenty of food for a small price, with a lot of entertainment and charm thrown in by owner George Hatzigiannakis (a near-spitting image for the restaurant-owner and father in the movie My Big Fat Greek Wedding).  George started working at the diner when it was owned by his uncle, after George arrived in the United States from his native Asprovalta, Greece in the early 1960s.  By 1969, George had bought out his uncle, and he and his wife Mary have run the diner ever since.

Mr. Filet has been part of my life since I started work at my law firm 16 years ago.  A small group from our office will head over for breakfast or coffee nearly every day of the week.  George and his assistant ("Young George") joke around with us and the other regulars, and often offer us special off-menu items.  For example, each summer George brings in fresh tomatos from his garden, and grills them with eggs and feta cheese for what we call "Eggs Asprovalta".  Throughout the year, George and Mary will bring in amazingly tasty home-cooked Greek dishes like moussaka (an eggplant & lamb casserole) and spanakopita (spinach & cheese filling in a layered phyllo dough crust).  Mary and the Georges are also major organizers of the annual Greek Food Festival sponsored by the local Greek Orthodox Church each summer (St. George's, natch).

This past January, a fire (started by spontaneous combustion of cleaning rags) broke out after hours, destroying the kitchen area and causing extensive smoke damage to the dining area.  George was severely underinsured, but a group of his regular customers banded together to help with much of the labor of gutting, cleaning, and repairing the diner.  When I stopped by today (see pictures below), the place looks to be back to normal, albeit with a little more open floorplan in the dining area, and new carpet.

Come Monday morning, sometime between 7:30 and 8:30 am, you'll find me at our usual table in the back corner, sipping coffee, yucking it up with my friends, talking politics and sports with the Georges, and tearing into a huge Greek omelette (grilled gyro meat, peppers, and onions, feta cheese, and cucumber-yogurt sauce over the top). 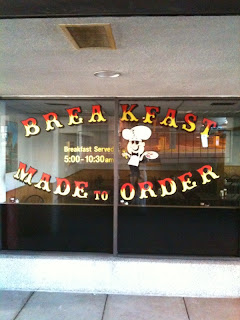 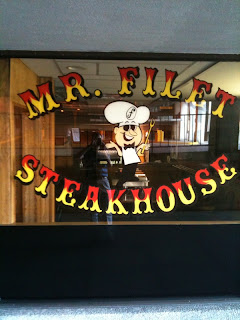 Addendum (5 April 2010):  Here are some photos from the first day back in business.  Business was so good that they ran out of eggs by 8:30 a.m., and George had to call his wife and two friends to bring eggs from local grocery stores! 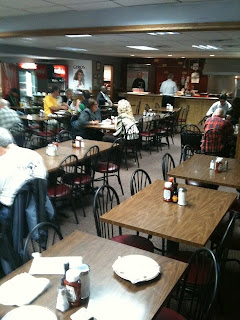 View of the new layout from our traditional back corner table.
Note the new soda bar in the front left, as well as the more spacious layout with the half wall removed from the back section. 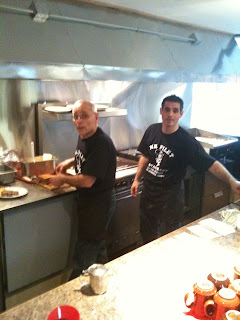 George and George hard at work up front in the grill area. 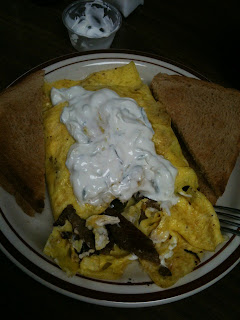 My Greek omelette—grilled gyro meat, grilled peppers and onions, and feta cheese inside, with cucumber-yogurt sauce on top.  The photo is a bit dark, so the meat and peppers look burnt when in fact they were actually grilled perfectly.  Tasty!
Posted by Grange95 at 4/01/2010 06:14:00 PM