I finally jumped back into poker action for the first time since my return from Vegas three weeks ago. I headed east to the Metropolitan Ely Invitational Championship poker tournament, hosted by Ironman Colt. Other Ironmen taking part included Santa Claus, Fat Jesus, and River Joe; Baby Carlos bailed, claiming some lame excuse about "work". Last year's MEIC Main Event was won by Mrs. Ollie (a/k/a "Kryptonite"), who took over for her husband when he was called away for fatherly duties, and promptly took his short stack to the title. The tourney highlight was when Kryptonite eliminated three players on one hand.  Tournament directors really need to take a look at this spousal bait-and-switch angleshooting.

This year, I was playing an average stack when Kryptonite pushed all-in over several limpers, and I woke up with Aces. Defying the odds, I managed to suck out a blank board and coasted to the final four. I got to heads up with Colt roughly equal in chips, and took a commanding lead when my red Presto held up against Colt's Ace-Yak. A few hands later, my King-Yak of crubs rivered a Yak to beat Colt's Ace-Eight for the title. Nothing too exciting, all pretty standard tourney play. But I'll take the cash!  Also, it means gays won both prestigious poker tourneys this weekend; just more evidence that gays and flushes both beat straights in poker ...

One funny moment occurred when we got down to three players. The third was Colt's niece who was playing with a hand ranking chart in front of her, yet had made several great calls to eliminate players along the way. Colt won a big pot from her with a suckout, and was stacking her chips when she sweetly says, "It's OK, I still love you." Colt and I laughed and started using that line the rest of the tourney. Wonder if we'll ever see Phil Hellmuth say that in the WSOP ...

On an unrelated note, let me pause to wish a happy 40th birthday to Ironman Bonnie, whose wife provided this great high school photo, which clearly inspired Napoleon Dynamite: 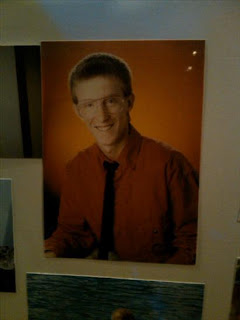 I will be returning to cash game action at the Meadows ATM later this week.  As always, hilarity and the revolution will not be televised, but may be Tweeted.
Posted by Grange95 at 4/11/2010 05:52:00 PM