While on IMOP-V last month, I played several sessions of 1/2 PLG at the Venetian.  During one late night session, a guy dressed in Cardinals gear was playing an uber-aggressive style and running over the table.  In a two hour period, I flopped two sets of 4s and a set of 6s against Cards.  Now, small sets can spell doom in PLG, but since Cards was uber-aggro, I stuck around all three times, and all three times I rivered quads!  Even better, it turns out Cards actually had big hands all three times as well, and paid me off.  The first two times, he did some standard whining, but the third time, Cards stood up and started shouting about the injustice of it all, putting on a real Phil Hellmuth temper tantrum before storming out.  The next evening, when I told the PLG players about the prior night, they told me Cards had played earlier that evening and was still bitching about it.  Hilarity certainly did ensue!

In honor of Cards' temper tantrum, I must highly recommend a new line of wines I recently discovered—Tempra Tantrum.  The Tempra Tantrum wines are from Spain, home of the Tempranillo grape, one of the few wine grapes that performs well in hot, dry climates (most of the traditional well-known wine grapes—e.g., Cabernet Sauvignon, Merlot, Chardonnay, Pinot Noir—perform best in cooler climates, or areas with cool, foggy mornings to offset hot summer days).  All of the Tempra Tantrum wines are a blend of Tempranillo and one of the "noble" red wine grapes—Merlot, Syrah/Shiraz, Cabernet Sauvignon, or Grenache.  Although Tempranillo historically was used for Riojas which are aged before release, in the past decade more Spanish winemakers are turning to a younger, fresher style of Tempranillo that emphasizes the grape's soft, juicy blackberry and plum flavors.  The Tempra Tantrum line is a good example of these modern, easy drinking wines that are also easy on the wallet ($8-$10 retail).  My personal favorite is the Tempranillo-Grenache blend.  Grenache is another grape that performs well in hot climates, and adds red fruit (cherry and raspberry) flavors to the blend; it goes very well with pizza, pasta with red sauce, and cheese.  For those who like a spicy note to their red wine, I highly recommend the Tempranillo-Shiraz blend. 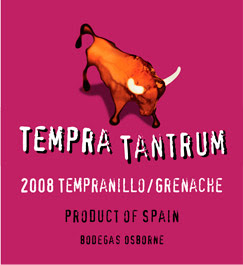