Yesterday, on my trip back to my home state of Nebraska, I encountered several examples of a common species of D-Bag, the Left Lane Slowpoke—drivers who sit in the left lane, but neither passing the traffic in the right lane nor pulling into the right lane, trapping faster movig traffic behind them in an impromptu rolling roadblock.  I'm not sure what motivates these folks:  some may dislike being in the same lane as most of the truck traffic, some may hate making lane changes, a few are probably oblivious to the traffic piling up behind them, and a few are trying to single-handedly enforce speed limits (they are the ones who make a point of not letting you pass for a mile or so, then glaring as you pass them on the right).

Our designated D-Bag, however, gets the award for exceptional inconsideration.  As I approached the Council Bluffs/Omaha area on I-80, I found my way blocked by this yahoo, who managed to almost—but never quite—pass the truck in the right lane for nearly 10 miles.  Both trucks were going 60-65 mph the entire time, while the speed limit is 70 mph (and prevailing auto traffic is typically ~75 mph).  By the time our yahoo gave up the chase and pulled into the right lane, over 20 cars had piled up behind me in a convoy of the damned. 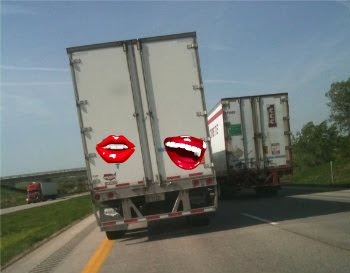 Trucking company name obscured to protect the innocent employer
from its inconsiderate employee.
So thanks a lot, pal.  Your little trucker's Indy 500 inconvenienced a bunch of other drivers, and probably created a potentially dangerous situation as all those congested cars waited to get past your inconsiderate and self-absorbed ego.