My Roots Are Showing

During my trip back to sweet home Huskerland yesterday, I got slow-rolled (or rolled slow) by a truck, but the lengthy drive was otherwise rather pleasant.  Of course, most of the trip was on I-80, which is not particularly interesting to most out of state drivers, but the speed limit in Nebraska is 75 mph (with traffic going 80-85 mph) so the countryside flies by.  Plus, with ESPN and Fox Sports talk radio available via XM radio, the trip isn't nearly as long and boring as it was back in the days of fighting with my brothers in the back seats of a late 70s station wagon on family trips.

Once I got off the interstate near Grand Island and took Highway 281 to head north to St. Paul, I saw a number of interesting signs and sights that were part of my farm background that many of my friends and readers of this blog might not be familiar with.  So, on my return trip, I made a few quick pitstops to snap these pictures on my iPhone.  Hope you enjoy! 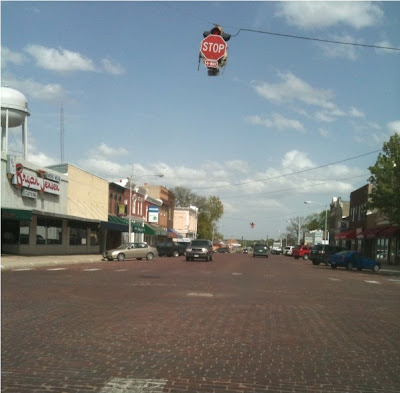 Red brick streets in the St. Paul business district.
St. Paul is a small town (population ~2,200), but it is a county seat, which is still a big deal in rural Nebraska.  A part of the tradition for many county seats (which were historically older and wealthier towns before their decline since the farm crisis in the 1970s) was to have paved streets by the county courthouse.  The original paving was done with bricks, but St. Paul's relative historical wealth was flaunted by extending the brick paving to the entire business district (the brick paving runs from the railroad tracks about four blocks ahead of the camera to a dozen blocks or so behind the camera where you can find the courthouse, school, and public library, and to most of the immediately adjacent side streets).  The city has maintained the brick paving despite paving the rest of the town using more modern methods.  As kids, when we visited our grandparents, we used to walk to a city park located by the trees in the upper left side of the photo.  My grandmother worked in a drugstore on the left side of Main Street, while my grandparents' house was a couple of blocks to the right side of Main Street.  Interestingly, for years my grandparents were neighbors to the Lynch family, creators of the famous Dorothy Lynch salad dressing (well, famous and popular in the Midwest, at least). 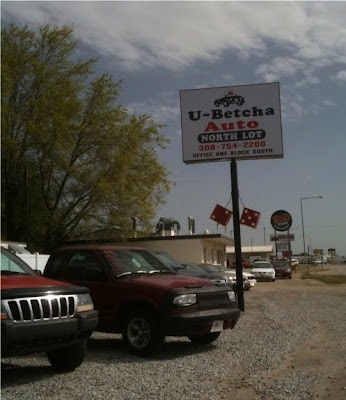 Funny sign on the outskirts of St. Paul.
I was reminded of this classic Saturday Night Live skit:

Bin There, Done That: 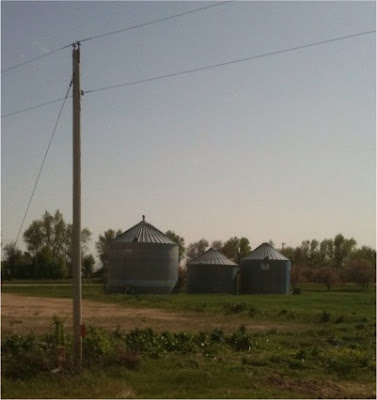 Farm grain bins.  These are set back from the road, so the telephone
pole creates a perspective that the bins are smaller than actual size.
Bin "rings" are ~ 3 foot high, so the large bin on the left is ~ 21 feet to the
base of the peak, and the peak adds an additional ~10 feet in height.
Grain bins are a common sight in farm country; every farmer has several for storing and sometimes drying grain that is not taken directly to the local elevator for sale during harvest.  The large bin above probably can hold ~10,000 to 13,000 bushels of grain (assuming a 24' or 27' diameter base), while the smaller bins will hold 1/3 to 1/2 as much.

We would often move grain out of bins for sale or to grind for livestock feed.  Let's just say that scooping grain inside a dusty steel bin during the middle of July is not a fun summer vacation activity.  It's even worse when your brothers (allegedly) have allergies to grain dust and get to do other chores.  Jerks.

Roadside melon stand near St. Libory, Nebraska.
The area between Grand Island and St. Paul has sandy soil suited to growing watermelons, muskmelons (mostly cantaloupe and honeydews), pumpkins, and squash.  There are several roadside farmer-owned melon stands along Highway 281 that have been around for decades.  Some Nebraska produce may have made its way into your fruit salad or pumpkin pie.

Typical "center pivots" used for irrigation (standard length is 1/4 mile long).
If you hit a big score in Las Vegas, you can "make it rain" at, ahem, a gentlemen's club.  In western Nebraska, where actual rain can be scarce, irrigation is often necessary.  On our farm in the aptly named Republican River valley, we used water from a nearby reservoir for gravity flow irrigation via pipes or siphon tubes (pictures of both techniques available in this discussion of "furrow irrigation").  In hilly areas, however, center pivot irrigation is the only option, using water pumped up from the Ogallala aquifer, a major aquifer in the Midwest (as an aside, the aquifer's name-source, Ogallala, Nebraska, is on the edge of the beautiful Nebraska Sandhills).  If you've flown to Las Vegas from the eastern United States and passed over Nebraska, Kansas, Oklahoma, Texas, or Colorado, and looked out your window, you've probably seen large green circles inside square fields.  The green areas are the potions of the fields irrigated by the center pivot, usually panted to corn, soybeans, or other "cash crop", while the corners are typically planted to a dryland grain crop (e.g., wheat or sorghum) or a forage crop (e.g., alfalfa or grass for hay). 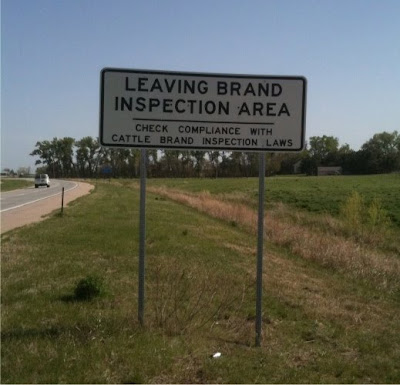 Most of western Nebraska is cattle country, and cattle branding is taken seriously.
Calves are typically weaned in May or June, and the process of "working calves" can be a rather tough few days of work, depending on the number of calves.  Calves are first separated from their mothers, then taken to a place with a squeeze chute to allow vaccination, castration (males), dehorning, tagging, and branding, before then being taken to the feedlot to begin the process of being fattened for eventual sale and slaughter.  Even though grazing in Nebraska is not "open-range" and cattle are usually kept in fenced-in pastures, cattle do find ways to break through fences, and branding is an easy way to separate mixed herds.  More importantly, with the recent economic downturn, cattle rustling is on the rise across the country, including in Nebraska.  So, inspecting the brands on cattle being sold or transported to an area without brand inspection procedures is an important process for ranchers.

When I was in 4-H, I got a purple ribbon for giving a 10-minute discussion and demonstration on brands and branding at the Nebraska State Fair.  Yup, I was a farm geek. 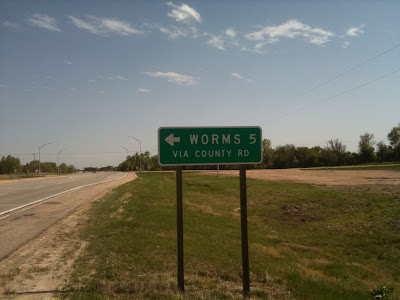 Great place names!
If you're sick of the South Beach diet and the Atkins diet, may I suggest a Diet of Worms?

Well, hope you enjoyed my nostalgic trip down the backroads of Nebraska!  Next time, we'll discuss pulling calves, and other glamorous farm chores.
Posted by Grange95 at 4/30/2010 10:08:00 PM